Roger Federer and Rafael Nadal broke the record for the highest ever attendance at a tennis match as they faced off during an exhibition match in Cape Town, South Africa on Friday.

Federer’s mum Lynette was born in South Africa, and this was the Swiss star’s sixth installment of his ‘Match for Africa’ in aid of his foundation.

The 38-year-old teamed up with Microsoft founder Bill Gates against South African comedian Trevor Noah and Nadal for a celebrity doubles match. 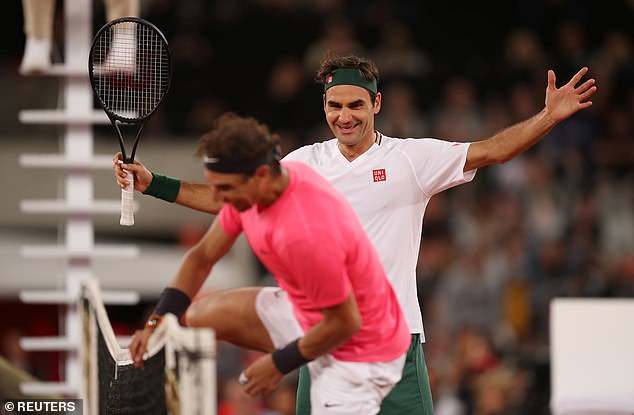 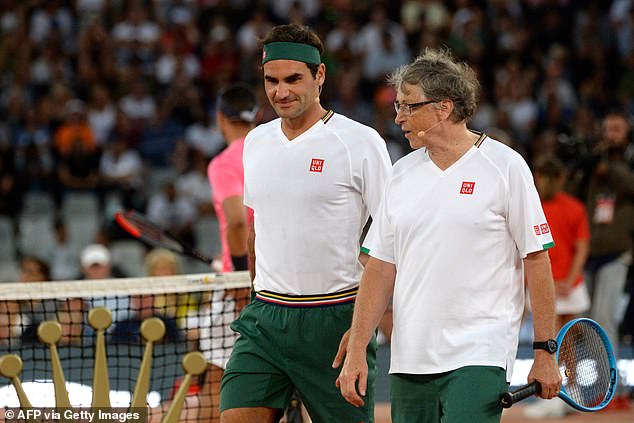 It felt like a homecoming for Federer, who beat his great rival 6-4, 3-6, 6-3 in a three-set exhibition match at a soccer stadium in Cape Town.

Almost everything was for Federer on the night. The caps and T-shirts with RF logos all across the crowd. The coin for the toss, a newly minted 20 Swiss Francs with Federer’s image on it. Federer recently became the first living Swiss to be engraved on one of the nation’s coins.

Even South Africa’s biggest sports stars were in awe. Siya Kolisi, South Africa’s Rugby World Cup-winning captain, came out pre-match to present Federer with a South Africa team jersey with Federer’s name on the back. He was asked who he was supporting. 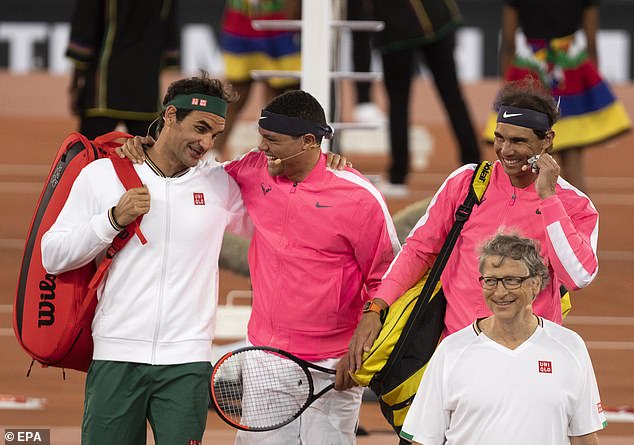 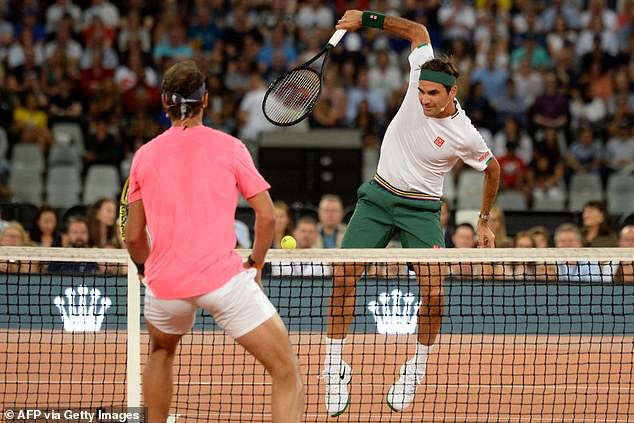 Nadal smiled graciously on the other side of the net.

The exhibition at Cape Town Stadium was to raise money for the Roger Federer Foundation, which supports early childhood education in six southern African countries, including South Africa. The foundation was hoping to top $1 million from the exhibition. It raised $3.5 million.

Also, a crowd of 51,954 came to the Cape Town Stadium – built for the 2010 soccer World Cup – to watch Federer and Nadal turn it on. Organizers said the demand for tickets was in the region of 200,000 requests.

‘It was a magical evening,’ Federer said.

The 38-year-old Federer, winner of a record 20 Grand Slam singles titles, and the 33-year-old Nadal, with 19 slams, laughed and joked regularly between points.

But they were typically competitive when the ball was in play. 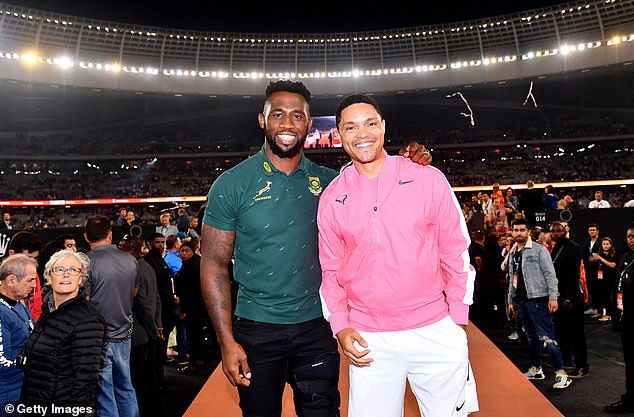 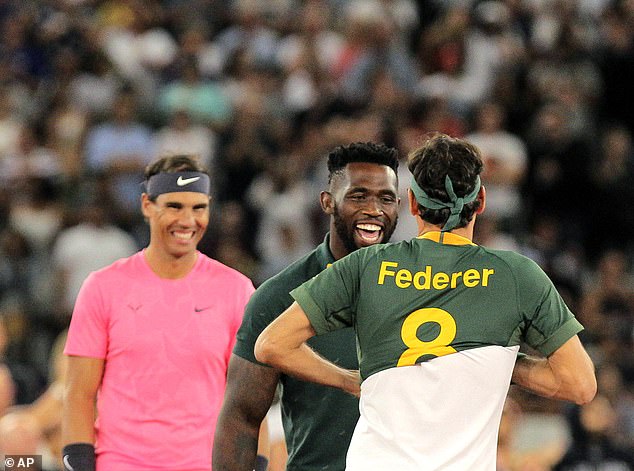 Federer won the first point with a high backhand volley, and broke in the first game on the way to taking the opening set 6-4.

Nadal broke back twice at the start of the second set and unleashed his big forehand winners, grunting loudly in the process, to level at one-set-all.

Federer won with a dainty drop shot on match point. Nadal gave everything to get there, and was going so fast he couldn’t stop in time and had to leap over the net.

He ended up standing next to Federer and they hugged.

‘We tried our best as always,’ Nadal said. ‘It’s a lifetime experience playing in front of such an amazing crowd in an amazing stadium. It was a big pleasure for me to be part of it.’

Ultimately, the match showed off the real friendship that lies beneath the fierce rivalry that began when Federer and Nadal played each other for the first time on tour at the Miami Open 16 years ago. 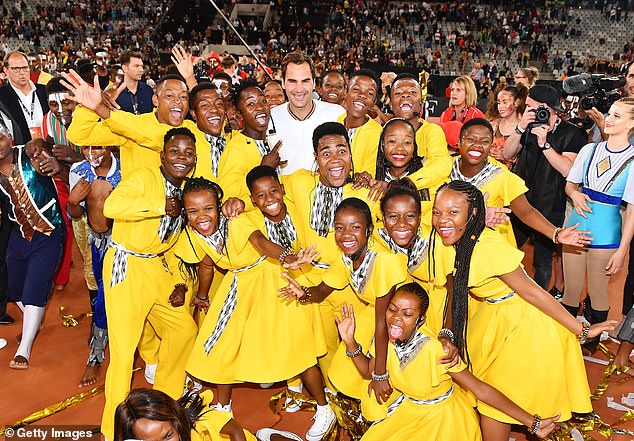 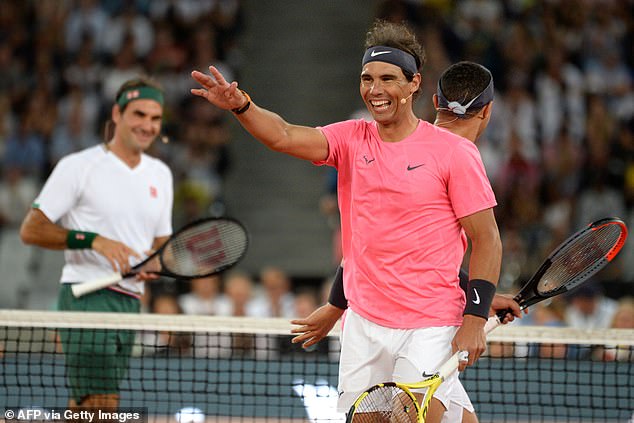 Federer also revealed that on the day of the exhibition, Nadal told him for the first time that he secretly cried for joy when Federer finally won the French Open in 2009.

Federer pulled in a couple of big-name friends alongside Nadal to help out on the night: Bill Gates and The Daily Show host Trevor Noah. Before the main match, Federer and Gates teamed up to beat Nadal and Noah 6-3 in a one-set doubles exhibition.

Microsoft co-founder Gates played one pinpoint lob volley that the announcer described as ‘the billionaire’s touch.’

Comedian Noah did plenty of good-natured trash talking. He shares a similar heritage to Federer. Both have Swiss fathers and South African mothers. 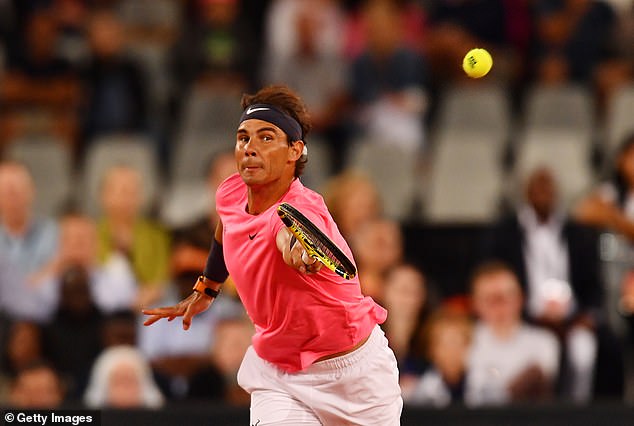 ‘Roger’s at a disadvantage. We’re both half-Swiss, half-South African, so I’m in his head. I know what he’s going to do,’ Noah, who wore a pink shirt and black headband to match partner Nadal, said before the doubles match.

Nadal has a 14-10 advantage over Federer in finals, leads 10-4 in their meetings at Grand Slams, and 24-16 in their career matches. Five years younger, the Spaniard may well go past Federer’s record of 20 Grand Slams.

‘I hope I can still play for a bit longer,’ Federer said. ‘We’ll see how much more. But there’s still lots to look forward to.

‘In my dreams, I never dreamed this far. I hoped to win just one Wimbledon. If he (Nadal) catches me, it’s OK.’