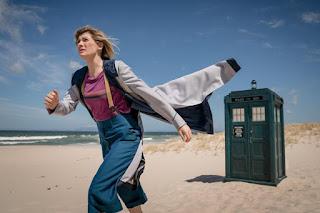 Last week on Doctor Who we’re faced with a threat that is a mix of our reality with the science fiction. I have to admit, I enjoyed this one much more than “Orphan 55” a few weeks ago, which seemed to be built around a similar idea but was poorly executed in some parts. I definitely appreciate our TV shows and movies trying to raise awareness around real world issues but not all of these stories work as well as the creators would have intended. Luckily, this one worked pretty well in my eyes. The idea of a virus quickly spreading throughout the world is certainly on everyone’s minds with the coronavirus news constantly present across the media. Then there’s the critical issue of plastic pollution which people very often seem to miss. That shot of the Indian Ocean garbage patch, tragically a very real one, is meant to hit people hard. There’s no need for the show to spell out the issue, it’s as clear in this shot as it possibly could be. Finally I have to mention the Doctor’s description of the microplastics that have saturated living beings. The fact that none of the companions were really aware of such problem actually represents a lot of people that hopefully can appreciate the educational aspect of the hour. I believe I’ve heard about microplastics before but sadly things that shouldn’t be forgotten sometimes end up slipping our mind. 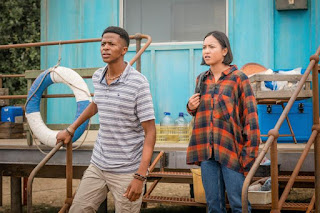 Aside from the reality check part of the episode, there’s many other things that I enjoyed in this one. The story was engaging, with elements of mystery that needs to be solved. Since we seem to be spending the majority of the time on Earth anyway I was at least glad to see different corners of it. Some of the places seemed familiar and the overall cinematography of the series continues to be absolutely on point. The reveal that Suki (with her perfectly equipped lab) was not exactly one of the good guys was cleverly done. Same as the Doctor I was a bit surprised at her level of preparation and the accidental meeting of the exactly right scientist under the circumstances but I quickly dismissed the thought until more information came into place. Surprising but obvious is very often the best kind of reveal for me. I did say that Suki isn’t one of the good guys, but she’s also not entirely a bad guy of the story. Yes, she is responsible for spreading Praxeus on Earth but her goal is ultimately to save lives, not take them. She identified Earth as a place rich in plastics and used this fact to her advantage. The Doctor still offers to help her, but it’s far too late for that after a few wrong choices made on Suki’s part. In the end it’s the bacterium, Praxeus, that is a true villain of the story. 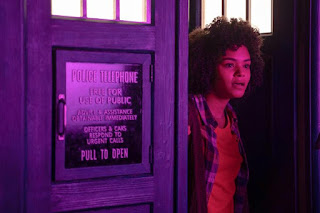 A big part of the reason why I enjoyed this episode has to be its characters. Even though it may feel like three companions might be a bit too much for Doctor Who, a story like this works really well with everyone, even with the addition of a few guest stars. I already mentioned the complicated nature of Suki and there’s not much I can add about Amaru, other than perhaps the fact that I’m not entirely sure whether he was a part of Suki’s crew or just a human that she recently met and he’s been helping her with her research. My guess would be the first option. A video blogger Gabriela was probably the most out of place for me. It seemed as if she forgot about her best friend by the end of the hour and just enjoyed the adventure. I think I liked her character better at the start of the episode than later on. She did have a few interesting interactions with Yaz and Ryan though. Yaz is certainly the biggest risk taker of our group. She’s also the one who finds herself in the most dangerous of places quite often. I do wonder whether there’s a cost she’s going to have to pay for that at the end of her story on the show. 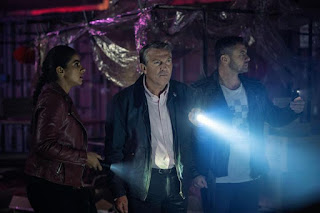 I really loved the plot focused on Jake and his husband Adam. A separated couple that finds their way back to each other throughout the episode. It was lovely to see them understand each other’s point of view and work to fix what felt broken, even under these terrible circumstances. These two (especially Jake) made me think of Jack and Torchwood which only made them more memorable in my eyes. I’m so glad they’re both alive and together at the end. A new beginning that’s absolutely worth fighting for. The Doctor can’t always save everyone, no matter how hard she would have tried, but I’m thankful for this little miracle, bringing Jake back to the TARDIS instead of having him make the ultimate sacrifice. We could use a happy ending and I loved this one for sure. Other than that ending my favorite part of the hour must have been the conversation between Jake and Graham on the beach. Graham’s advice makes a difference and helps Jake see what he’s been missing. There’s also that shot when Jake asks whether Graham understands what it’s like to be married to a person as impressive as his husband, the astronaut. The look on Graham’s face is perfect, he doesn’t have to say anything, but the subtle reference to Grace is more than clear in this moment. It’s such a brief part, easily missed, but I loved it all the same.

Whovian notes and questions:
1. What was your favorite part of the episode? Or maybe a favorite guest character? Would you like to see any of them return in a future episode?
2. In terms of the mix between reality and the science fiction in this episode, how did you enjoy the end result? Do you think it was too much or exactly the right way to approach such storyline?
3. Are you disappointed we haven’t made any progress in the main story of the season in this hour, or did you enjoy a break from it and the return to basics of Doctor Who?

1. The Doctor: “Planet Earth. Seven billion lives. Separate, and connected, from the edge of the atmosphere to the depths of the ocean.”

What did you think about “Praxeus”? Any favorite scenes, quotes or theories? Feel free to let us know in the comments. As always, thanks for reading!