The Health Ministry has ordered Rambam Medical Center in Haifa to establish an isolated unit to treat coronavirus patients in case the number of infections in the country spikes, the hospital said Saturday.

The hospital stressed it is not currently treating anyone with the virus and said the move was part of efforts to set up additional centers in northern and southern Israel for treating people with the pathogen.

“The preparations include creating a designated and separate ventilation system for this unit and the preparation of infrastructure that will ensure a safe and comprehensive quarantine, according to the strict requirements determined by the Health Ministry,” the hospital said in a statement.

It said the unit will be set up on its own floor in one of the buildings at the medical center and have a separate entrance from the rest of the hospital.

Dr. Michael Halbertal, the director of Rambam, touted the hospital’s past experience in dealing with complex medical situations.

“There is also no doubt that the challenge of providing medical service to members of the Israeli public sick with the coronavirus will be done with the same level of dedication and professionalism,” he said.

There are currently seven Israelis who have been diagnosed with the coronavirus, all of whom are under quarantine at Sheba Medical Center in Tel Hashomer.

Three of the infected were on a cruise ship quarantined off Japan amid concerns over an outbreak of the virus on the ship, while three others tested positive after returning from Italy.

The other confirmed case is the wife of one of the patients who was in Italy, the first known person-to-person instance of the virus spreading in Israel.

Earlier Saturday, the Health Ministry called for anyone to self-quarantine who was in close proximity to two of the Israelis who tested positive for the coronavirus and published a list of places they visited since returning to the country.

The ministry has a web page where members of the public can register that they have self-quarantined. There is also a hotline, at *5400, that can be used for the same purpose.

“If, during the course of the quarantine, symptoms of fever, coughing, or difficulty breathing appear” the person should immediately call emergency services, the statement said.

Israel has taken far-reaching steps to prevent an outbreak, banning entry to foreigners who were in China, Hong Kong, Macau, Thailand, Singapore, South Korea, Japan and Italy in the 14 days prior to arriving, and compelling all Israelis recently in these areas to self-quarantine for 14 days. 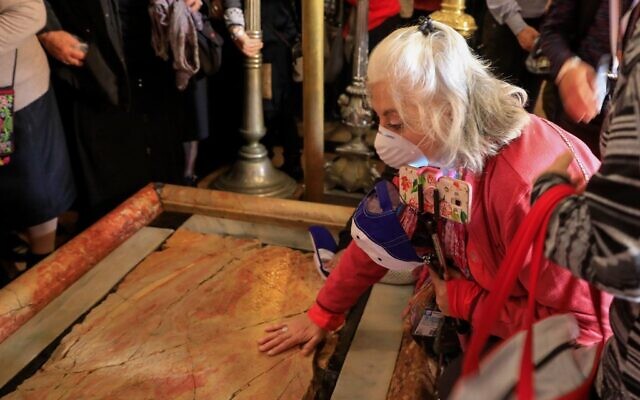 A pilgrim wearing a protective mask visits the Church of the Holy Sepulchre in the Old City in Jerusalem on February 27, 2020. (Emmanuel Dunand/AFP)

“If you don’t genuinely have to fly, don’t do so,” the ministry said in a travel warning.

Israel is the first country to urge its citizens to refrain from international travel entirely because of the outbreak, which started in China in December and has since infected over 85,000 worldwide and claimed over 2,900 lives, almost all of them in China.

The Health Ministry has faced criticism for its extreme measures, with some saying it is unnecessarily panicking people and causing economic and diplomatic damage to the country. Ministry officials have said they prefer to take a strict line than be sorry later.