In yet another indication of warming ties between Jerusalem and some Arab countries, an Israeli official this week actively participated in an anti-terrorism conference in Morocco.

The name of the Israeli official who attended the so-called Warsaw Process Counterterrorism and Illicit Finance working group in Marrakech on Wednesday and Thursday cannot currently be published, due to security reasons.

“Delegations discussed the ever-changing threat posed by al-Qa’ida and its affiliates and acknowledged a range of efforts that can be employed to counter this still potent threat, including the promotion of a set of non-binding principles,” the US State Department said in a statement.

“Participants shared their regional perspectives on countering al-Qa’ida and discussed threats from other terrorist groups. A number of delegations also noted the destabilizing activities of Iran and its proxies, especially Hizballah, and the need to collectively confront Iran’s continued support to terrorist groups.”

Israel was one of more than 50 countries who are part of the Warsaw Process, which started with the Ministerial to Promote a Future of Peace and Security in the Middle East that took place in the Polish capital in February 2019.

That conference, co-sponsored by Poland and the US, was originally billed as part of global efforts to counter Iran, but was later toned down and instead focused on the vaguer goal of seeking stability in the Middle East.

This week’s Counterterrorism and Illicit Finance working group is the final working group meeting of the Warsaw Process in advance of the 2020 Warsaw Ministerial to be held in Washington D.C.

In a joint statement released Thursday, participating countries and organizations acknowledged “the ever-changing threat posed by al-Qa’ida” and listed several principles to help promote “collective cooperation by participants to employ a comprehensive approach against the ever-changing and evolving al-Qa’ida threat.”

Last month, Prime Minister Benjamin Netanyahu reportedly attempted to arrange a three-way agreement by which the US would recognize Moroccan sovereignty over the disputed Western Sahara territory, in exchange for Morocco taking steps to normalize relations with Israel. 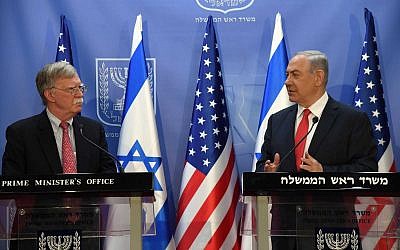 Netanyahu made several overtures to Washington over the past year to promote such a deal, but former national security adviser John Bolton was strongly opposed, according to a Channel 13 news report.

Following Bolton’s departure in September, Netanyahu reportedly raised the matter again with Secretary of State Mike Pompeo, but the White House has not agreed to the trade-off.

Israeli officials cited in the report said the proposed deal had something for everyone — US President Donald Trump could boast of having advanced ties between Israel and an Arab state, Netanyahu could visit Morocco and hold a high-profile meeting with King Mohammed VI, and Rabat could secure US recognition of its claims in the Western Sahara.

Morocco occupied large swathes of the Western Sahara in 1975 as Spain withdrew from the area and later annexed the territories in a move not recognized internationally.

The Israeli proposal was relayed to the US by National Security Adviser Meir Ben-Shabbat, who the TV report said had developed ties with an aide to Moroccan Foreign Minister Nasser Bourita. Both Ben-Shabbat and Bourita also reportedly had ties with Yariv Elbaz, a Jewish businessman who is close to Trump’s senior adviser and son-in-law Jared Kushner.

Morocco is considered an ally of the United States, and has long maintained informal but close intelligence ties with Israel.

Though the countries have no formal relations, Morocco has hosted Israeli leaders, and Israelis are allowed to visit there. Some 3,000 Jews live in Morocco, a fraction of the number from before the 1948 creation of Israel, but still the largest community in the Arab world. 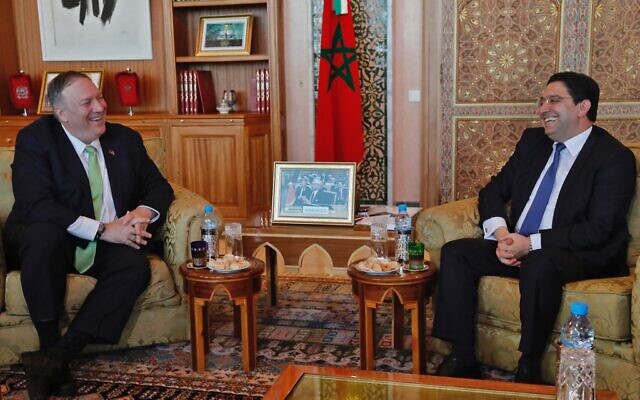 US Secretary of State Mike Pompeo meets with Morocco’s Foreign Minister Nasser Bourita (R) during his visit to Rabat on December 5, 2019. (AFP)

In December, Channel 12 news reported that Netanyahu hoped to join Pompeo on a trip to Morocco, but when the secretary of state proposed the idea to the Moroccans, they refused and even declined to discuss the issue of normalization.

In October 2019, Israel participated at the Warsaw Process’s working group on Maritime and Aviation Security in Bahrain.

Jerusalem was represented in Manama by Dana Benvenisti-Gabay, the head of the Foreign Ministry’s regional security and counter-terrorism department, who delivered a speech at the event. 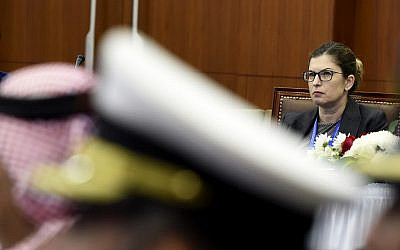 Dana Benvenisti-Gabay, director for regional security and counter-terrorism at the Foreign Ministry, attends the opening session of the two-day Warsaw Ministerial Maritime and Aviation Security Working Group meeting in the Bahraini capital Manama, on October 21, 2019. (STR/AFP)

Though Israel has ties with only two Arab states, Egypt and Jordan, there has been a warming with Bahrain and other Gulf states in recent years amid their shared antipathy toward Iran.

The two-day Bahrain conference was not the first time Israeli and Arab officials sat together in the context of the Warsaw process. On October 8, an Israeli representative sat with colleagues from Bahrain, Saudi Arabia, United Arab Emirates, Yemen and other Arab states at a conference on cybersecurity in Seoul.

Three days later, Benjamin Krasna, Israel’s deputy ambassador to the US, participated in the Warsaw working group on human rights in Washington, which was also attended by many Arab countries. 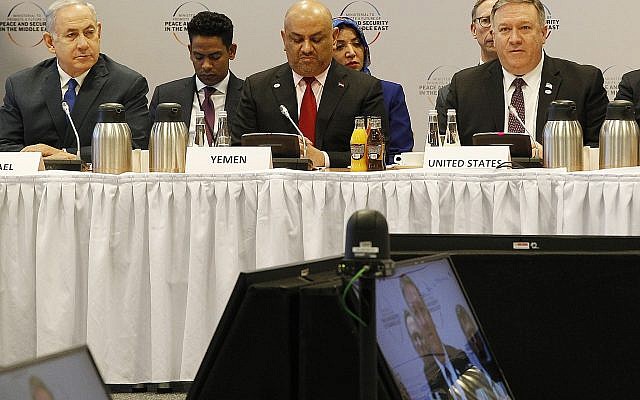 From left, Prime Minister Benjamin Netanyahu, Yemen’s Foreign Minister Khaled Alyemany and US Secretary of State Mike Pompeo attend a session at the conference on Peace and Security in the Middle east in Warsaw, Poland, February 14, 2019. (AP Photo/Czarek Sokolowski)

Netanyahu attended the original Warsaw conference in February 2019, along with senior dignitaries from the Arab world. During the summit, he sat next to the Yemeni foreign minister. At a closed event on the sidelines of the meeting, which Netanyahu attended, the foreign ministers of several Arab states openly discussed the notion that the Iranian threat was a more pressing concern for the region than the lingering Israeli-Palestinian conflict.

Israeli and US officials hailed the event as a breakthrough.

Times of Israel staff and agencies contributed to this report.

Covid in Scotland: Level 4 lockdown to be imposed in 11 council areas

Arizona election updates: Saturday could be decision day for Trump, Biden in race for White House