Old man lying
By the side of the road
With the lorries rolling by,
Blue moon sinking
From the weight of the load
And the buildings scrape the sky.

Cold wind ripping
Down the alley at dawn
And the morning paper flies,
Dead man lying
By the side of the road
With the daylight in his eyes.

Don’t let it bring you down
It’s only castles burning,
Find someone who’s turning
And you will come around.

“Don’t Let It Bring You Down”

Written by Neil Young, from the album After the Gold Rush

I prefer the Annie Lennox cover, which was used to great effect in the hit movie American Beauty.

Here are the facts from bear market history

The market is likely to get worse before it finally stabilizes

There is so much uncertainty out there that forecasts are essentially useless. That’s why I’m drawing on history to at least set some kind of parameters.

In these extraordinary times, even skilled and experienced investors are falling into the emotion trap. I implore you not to go down that road, because you will look back at today and regret the decisions you made that were based on fear and panic.

The speed and depth of this bear market is unprecedented. I can’t find another example where the market dropped by 32% in a single month. If you know of one, share it in the comments below.

We are clearly in a bear market. The historic 11-year bull run is dead. Have you planned for this contingency?

I’ve been pounding the table for years about the importance of having a Plan B for markets like this. If you have one, congratulations. Just follow your steps as written. If you don’t have one, you’re probably behind the curve, but it’s not too late.

So, your portfolio is down 20% or 30% or maybe even more? If you freeze up and do nothing, maybe things will work out eventually, but did you know that it took 25 years for the market to recover from the crash of 1929? Do you have 25 years to wait until your portfolio is made whole again?

A new recession is virtually guaranteed to hit us next quarter, if it hasn’t already started. In a recession, the market usually begins to fall about 4 months in advance. The good news is that the market tends to stabilize and move higher several months before the recession ends.

Here’s the big question: has the market already fully priced in the effects of the recession? I don’t know, but I think the odds are that it hasn’t. That’s why I think we’re headed for 2000 on the S&P 500. Whether 2000 will hold is largely up to our policy makers in Washington. If they bungle their response, 2000 may not hold.

Keep an eye on new jobless claims. Unemployment is now 3.5% and it’s undoubtedly headed higher. How much higher is anybody’s guess, but mine is 6%. Depending on the policy response, that could eventually go as high as 10%.

You can ignore the Trump administration’s prediction of 20% unemployment because that would mean we’re headed for a 1930s’ style depression. I don’t see that happening. 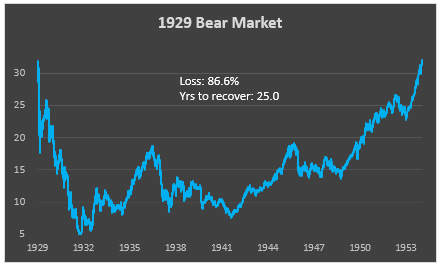 This was the worst bear market in the history of U.S. markets. I’m not saying that our current bear market will be as bad as the 1929 one, but it happened then, and it could happen again, especially if our policy makers get things wrong as they did in 1929. 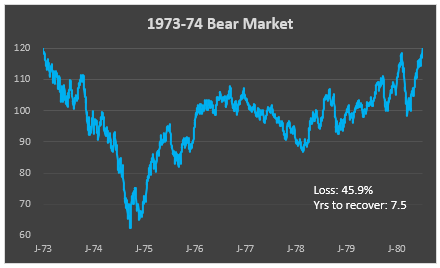 This bear was particularly nasty for a few reasons. One, it took 7.5 years for investors to recover. Two, it was very choppy, which frustrated those who were trying to figure out when to get back in. And three, it happened during the impeachment and resignation of president Nixon, which was a rocky time for everyone.

And, it led to the hyper-inflation caused by OPEC jacking up the price of oil. 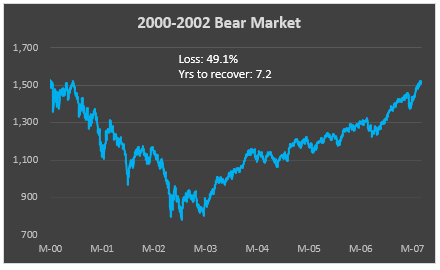 Most investors today remember the bursting of the tech bubble in 2000 and the bear market that followed. But my question is this: have they learned from it? I’m not so sure, because today (prior to the most recent crash) investors were bidding up the prices of the same kinds of tech companies that were prevalent in 2000. 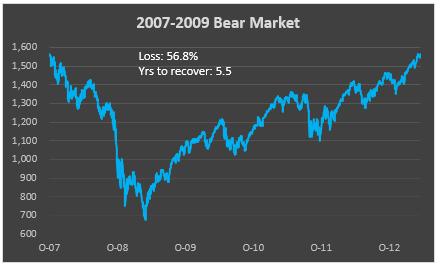 Aside from the crash of 1929 and the Great Depression that followed in its wake, the bear market and global financial crisis of 2007-2009 was the worst. Investors, citizens, businesses, and the government were rightfully worried that the entire financial system might collapse.

We face the same worries today. With so much uncertainty about the effects of the pandemic, and the drastic measures taken by the Fed, investors and citizens are worried about a complete health and economic meltdown. It’s a clear and present danger, but I believe that the odds are very low that this will come to pass.

That’s why this article is meant to calm you down. If you expect the worst outcome, you will be prone to making mistakes with your investment decisions. Plus, your stress level will skyrocket, which compromises your immune system, which makes you more vulnerable to contracting the virus.

So calm the f**k down, chill out, and let this scourge pass over us. The market will come back in due time, and Armageddon is still many years away. 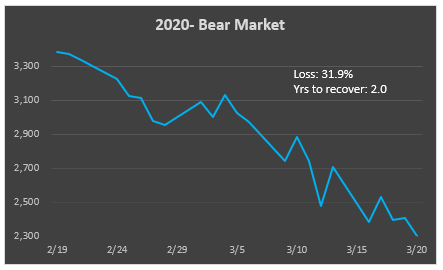 There’s scant information available for our current bear market, but what is clear is the speed of the decline from the top on February 19th to today. I think the proliferation of ETFs has something to do with this speed, and depth of the selloff. It reminds me of what happened in 1987.

In 1987, so-called portfolio-insurance products, which were created to protect investors from falling markets, instead, helped exacerbate a breakdown on Wall Street that resulted in the largest one-day, stock-market percentage decline in history.

Portfolio insurance, employing computer algorithms, was designed to limit an investor’s loss from a plunging market, while preserving upside gains in rising markets. It consisted primarily of derivative bets, and often involved using “stock-index futures in a rising market and selling them in a falling market,” according to “A Brief History of the 1987 Stock Market Crash with a Discussion of the Federal Reserve Response” written by Mark Carlson in 2012, then an economist at the Federal Reserve. Carlson said using futures were common because it was cheaper for those firms offering such insurance products.

Hayne Leland, Mark Rubinstein and John O’Brien are credited with originating the options-pricing in 1979 that would underpin what they described as portfolio-protection strategies, according to Capital Ideas: The Improbable Origins of Modern Wall Street by Peter Bernstein.

Portfolio-insurance became popular in the 1980s as institutional investors such as pension funds were increasingly concerned with elevated valuations, that often precede market corrections, defined as declines of 10% or more from a recent peak.

During the days leading up to the ’87 crash, there were increasing worries that the collective use of these products “could snowball into a stunning rout for stocks” if investors sold stocks and futures simultaneously, Carlson wrote, citing an article written by The Wall Street Journal before the crash in 1987.

Indeed, the week before the crash of 1987, the S&P 500 index SPX, -11.98% dropped 9%, one of the largest weekly declines in decades, which triggered a sell signal for nearly all existing portfolio-insurance models.

Of course, portfolio insurance wasn’t the only factor that brought the market to its knees. Some other contributors to the fall were margin calls that hamstrung liquidity and lack of reliable, real-time information.

I’ve painted a rather dark picture for the market in this article, so why am I saying that you should calm down? That’s a fair question.

We’re already down 32%, so I think we’re closer to the bottom than we are to the top. I think 2000 will hold for the S&P 500. There are many unknowns out there, so this forecast can change as the situation unfolds. I suggest that you stay tuned to this article series and watch for updates.

Editor’s Note: The summary bullets for this article were chosen by Seeking Alpha editors.