These are the closed-end funds that I purchased when we hit the initial 10% correction territory. We have gone down further since. However, I believe these are still attractive names to be holding.

It certainly has been a wild week for the market. We have now entered into correction territory at the fastest pace in history. This was on the back of what the Coronavirus could do to the global economy. On top of that good news, we have also experienced the worst week since the 2008 GFC. Certainly, that is not what most individuals want to hear. We aren’t even done with Q1 of 2020. This was also preceded by what seemed like progress in January for the U.S.-China trade negotiations. The focus of the two governments is, rightfully so, not on such subject matter for the moment. 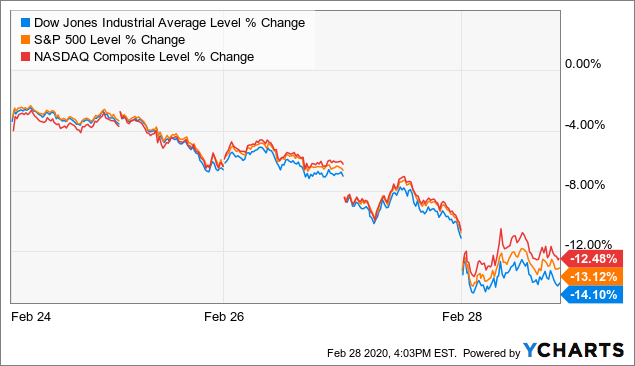 I’m not sure when such volatility will be over or when the bottom will be in. However, as a long-term focused investor, I’m not particularly worried either. This tumultuous fallout in the market has provided an opportunity to pick up shares of some of the most solid CEFs around. It may take 3 months, 6 months or maybe a year before the latest debacle is sorted out or we stop hearing about it. Though, in the grand scheme of things, it most certainly isn’t likely to end the long-term trend of continued increasing investment values over time. It also isn’t likely that we see CEFs not continue to provide income through a diversified portfolio.

What does a correction or bear market in 2020 really mean to an investor like me? An investor that is looking for income and long-term total return? When we have 5, 10, or 20 years+ to invest? There are even those investors that are looking only to pass on their accounts and investments to their heirs. Those fortunate enough, never even have to touch the original principal. That is a tremendous accomplishment too.

The answer to every one of these questions above is – well, it really doesn’t mean anything. In fact, it could just mean an opportunity to put our cash positions to work. That is indeed what I have started doing this week in several names that I wanted to recap below. And for your information, I bought too early with the majority of my ‘nibbling’ coming on early Thursday. This was before the indexes turned even lower later in the day. It certainly can be frustrating or make one anxious to see such a precipitous drop. However, my line of thinking is what I shared above. It’s just simply that I’m not concerned with worrying about the absolute low as a long-term investor.

The decision to make purchases, ultimately, was that we hit the intraday technical correction mark of 10% on the broader markets. The next stop where I put the rest of my cash to work is at the 20% mark. A 20% drop is the technical definition of entering a bear market. To be fair, I’m generally always making at least some small purchases on a monthly basis as well.

I also want to mention that I’m not naive. If the market is in a prolonged bear market of a year or more – we will more than likely see distribution cuts from many CEFs. This includes the names that I picked up this week, no matter how much I view them as quality. The fact is that CEFs payout the majority of their income and capital gains via high monthly and quarterly distributions. This is especially true for equity funds as capital gains and unrealized capital gains can possibly dwindle away in a rapid fashion.

I believe the long-term strategy could be summed up by a mantra of “buy low, possibly never sell.” This mindset was important to preface before jumping into the list of positions I added to. This was for the fact that it isn’t about exactly timing the market perfectly. Which, no one is really able to do consistently for extended periods of time anyway. This also feeds into the “compounding income on steroids” strategy employed by Stanford Chemist. That’s why the strategy is equally as appealing to me, too, no market timing required! Instead, let the opportunities come to you and trade when there is a potential. 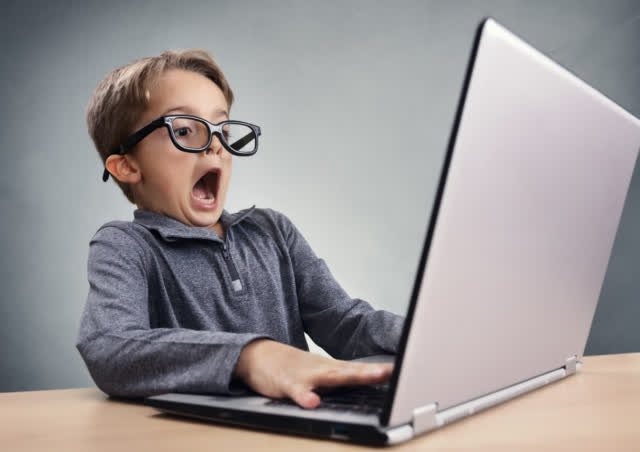 The fund has an investment objective of “providing investors with a high level of total return consisting of dividends and other income, and capital appreciation.” Their strategy includes investing at least 80% of its total assets in equity and equity-like securities issued by the US and non-US issuers that primarily own or operate infrastructure assets.”

The exposure to energy names should not be disregarded and those venturing into this name need to be aware of this exposure. 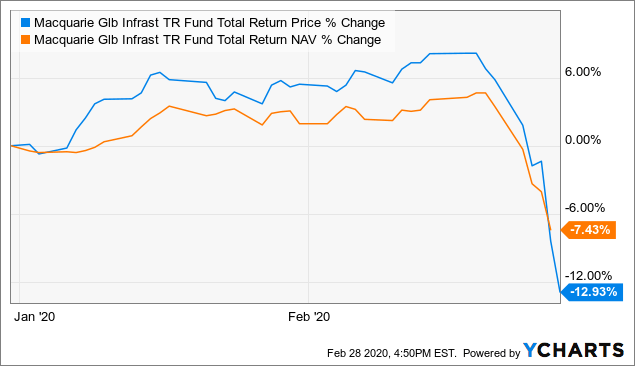 PIMCO has an exceptional track record in the fixed-income space, being able to produce attractive historical returns, while many of its funds pay off consistent distributions. The consistency sometimes leads the funds to unsustainable levels, which can turn very bad when cuts are put into place. However, for PCI we haven’t experienced a distribution cut since its inception in 2013. We have received a few increases though.

PCI has an investment objective to “seek current income as a primary objective and capital appreciation as a secondary objective.” They use a “…dynamic allocation strategy across multiple fixed income sectors, with an emphasis on opportunities in developed and emerging global credit markets…” This strategy allows investors a bit of exposure to most fixed-income spaces. However, the real emphasis is on the non-agency MBS. The fund has a 43.98% sector allocation to those alone.

PCI is in our Income Generator portfolio.

With that in mind, the total market return for 2019 was a whopping 33.05%. Suffice it to say – that led to a huge discount to premium contraction. This fund as of 2/27/20 close was at only a 3.95% premium. This is quite attractive for a PIMCO fund that generally trades at much loftier levels. 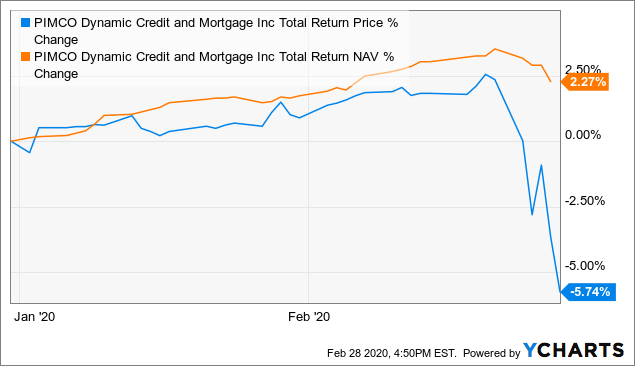 RQI, this fund had just received quite the discussion with its recent rights offering. Now that chapter is closed and the managers had just missed their collapse in the share price. Not only did we have pricing pressure from their RO that they conducted, then we were whacked with this past week’s market performance in general. Truly, the managers were very lucky to pull in the ~$350 million when they did.

While I was a bit disappointed in RQI managers pulling off an RO, I know that is one of the major ways to grow a CEF. The other ways to grow share count and assets is through at-the-market offerings and DRIPs. I also can’t blame them as their share price began trading at a premium for the first time since 2008. In addition to that, it was at a share price that wasn’t seen since 2008 too.

I’m willing to take the disruptive blow and give the managers the benefit of the doubt. This helped push RQI to discounts that we haven’t seen in years now. I’ve made several purchases of the fund since midway through its RO as the fund hit close to a 9% discount. Though, adjusted for dilution meant that the fund wasn’t at quite that large of a discount.

RQI is a position in both our Income Generator and Tactical Income- 100 portfolios. 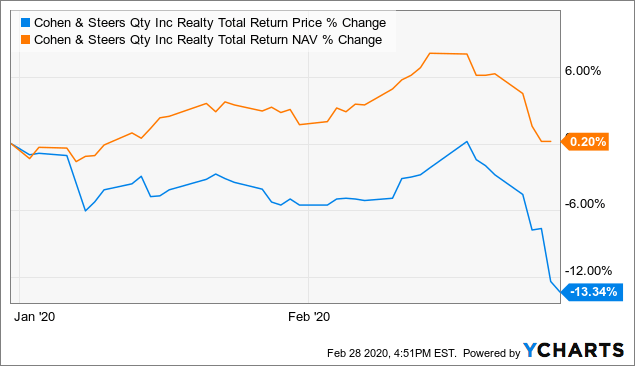 (Since NAV hasn’t updated – I would highly anticipate the total NAV return to be lower than what is reflected above.)

BDJ has been an attractive fund for those investors seeking exposure to large-cap equity names, with an options overlay. The fund has treated me well since I’ve held it.

I find the options portion of the fund appealing for the simple fact that in a flat or slightly down market the fund is still able to produce attractive returns. However, one may note that since the 2008 GFC and the practically never-ending bull market has made this fund lag in performance. That is quite true. However, the fund has a distribution rate currently at over 7% and something like the SPY does not. I am a fan of high yields (even while holding many individual growth positions that don’t necessarily have even close to the same yields.) Additionally, while it isn’t a major focus of the fund, about 20% of its assets are outside of the U.S. This can allow for potentially interesting holdings that I wouldn’t anticipate holding directly. 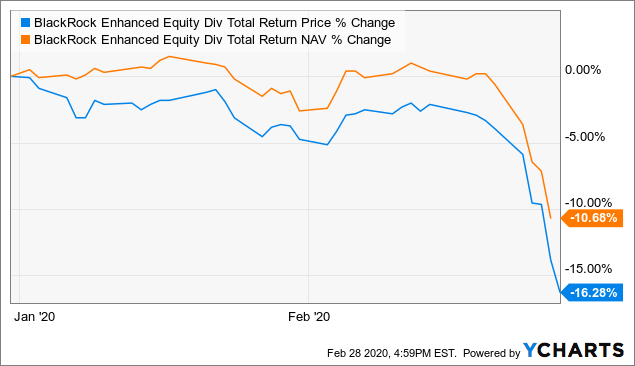 EXD has also been covered somewhat recently and is a position in our Tactical Income- 100 portfolio at the CEF/ETF Income Laboratory.

The basic premise of EXD is the fact that its peers, ETB and ETV, trade/traded at premium levels while EXD has lagged over the past year. This has to do with the fund’s switch in early 2019 to become almost clones of those other Eaton Vance funds. The fact is, most investors just look at its long-term chart and see nothing but lower lows – this was all based on their ‘old’ strategy and name.

Worth noting here, for anyone interested in EXD, they need to know that the fund is very small. They only have approximately $93 million in total managed assets so the volume can be light on some days. Though we have been more than doubling the average volume today (and presumably most of this week!) This would be due to what I would expect are massive sellers and the volatility has been significant this week. 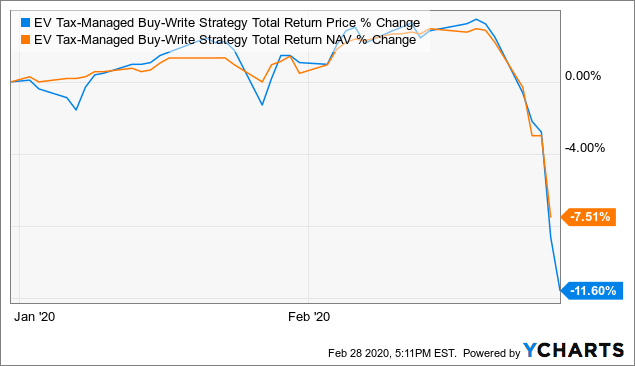 I just covered BST extensively and provided an update so I will keep this short. This also noted why I was watching this name intently. To summarize briefly, the funds focus on tech makes me believe that it is a prime candidate for a strong bounce-back whenever one should come. Additionally, holding tech names and collecting a 6.35% distribution rate is quite attractive.

While the fund has fallen along with the rest of the market – on a YTD basis I’m quite surprised at the fund’s total returns on NAV and share price. I did anticipate that this fund would drop even further with said tech exposure. Regardless, the fund has dropped enough to make it attractive. It has just barely hit correction territory on a NAV and share price basis. With peak to trough, down 11.79% for share price and 10.27% down on the NAV. This also puts the fund at a 1.57% discount now. This puts the fund at a 1-year z-score of -2.05. Of course, this is due to the fund’s tendency to trade at premium levels. Premium levels have been around for a couple of years now in BST. 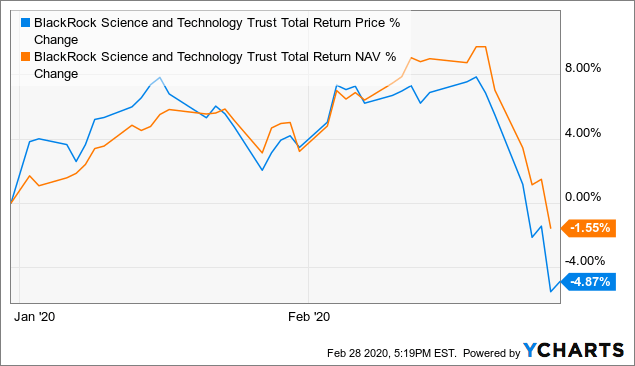 Overall, these were the funds that I’ve added to so far for this first bit of volatility. There are many funds that a long-term investor could benefit from greatly by adding to their portfolios, either initial adds or accumulative adds. However, at the current velocity of the downturn, it does seem that we could very likely go even lower. With that in mind, I have still kept a healthy cash position to be able to take advantage of move lowers. Now that I have made my purchases at the 10% correction level, the next level I am looking at to add even more is at the 20% mark.

At the CEF/ETF Income Laboratory, we manage ~8%-yielding closed-end fund (CEF) and exchange-traded fund (ETF) portfolios to make income investing easy for you. Check out what our members have to say about our service.

To see all that our exclusive membership has to offer, sign up for a free trial by clicking on the button below!

Disclosure: I am/we are long BDJ, BST, EXD, PCI, RQI, MGU. I wrote this article myself, and it expresses my own opinions. I am not receiving compensation for it (other than from Seeking Alpha). I have no business relationship with any company whose stock is mentioned in this article.

FNC Contributor Donna Brazile: Moving Forward We Need To Get Rid Of Caucuses in the 2024 Nominating Process

In California: COVID-19 keeps killing people, many are farmworkers