Stacy Keibler showed off her baby bump when she headed out for a hike in Beverly Hills on Thursday.

The DWTS alum, who famously dated George Clooney looked incredible in her workout gear as she enjoyed a break from the Covid: 19 lockdown.

The 40-year-old, who is eight months pregnant with her third child, teamed a loose-fitting baggy grey vest top with cropped black leggings and trainers. 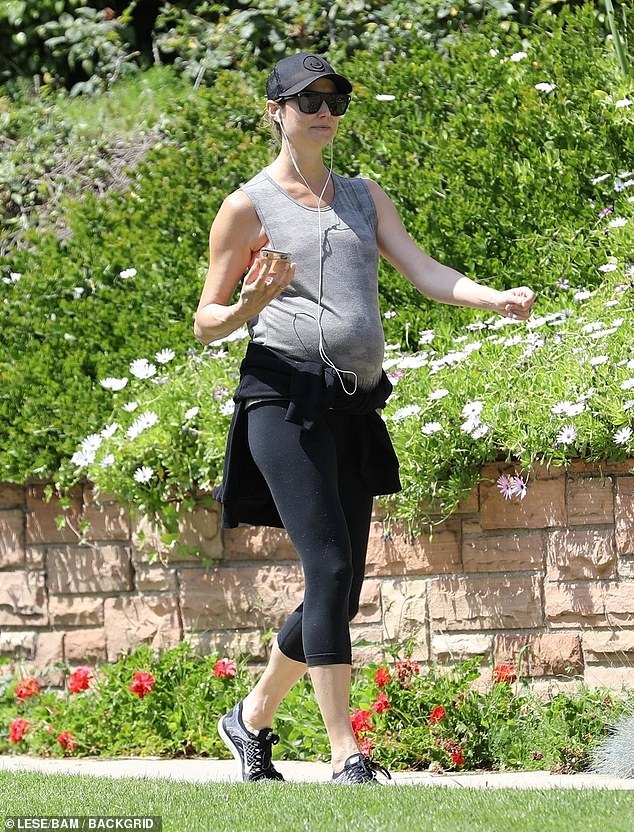 Keeping fit and healthy: Stacy Keibler, 40, displayed her blossoming baby bump as she enjoyed a sunny hike in Beverly Hills a month before her due date

She tied a black sweater around her face and wore a baseball cap and dark sunglasses.

Stacy revealed she and her husband of five years Jared Pobre were expecting their third child back in December and the baby is due in May. 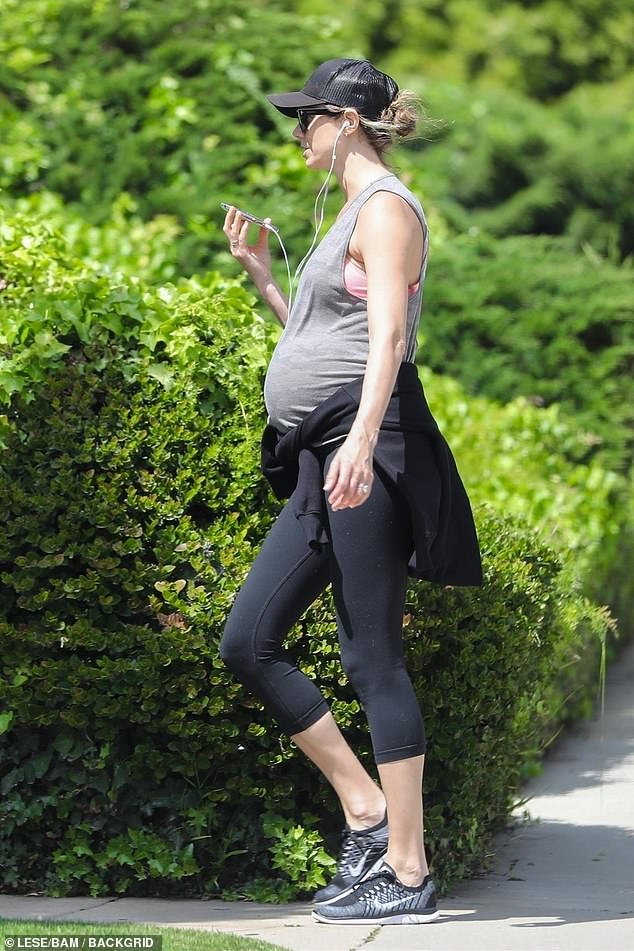 Adding to their brood: Stacy revealed she and her husband of five years Jared Pobre were expecting their third child back in December 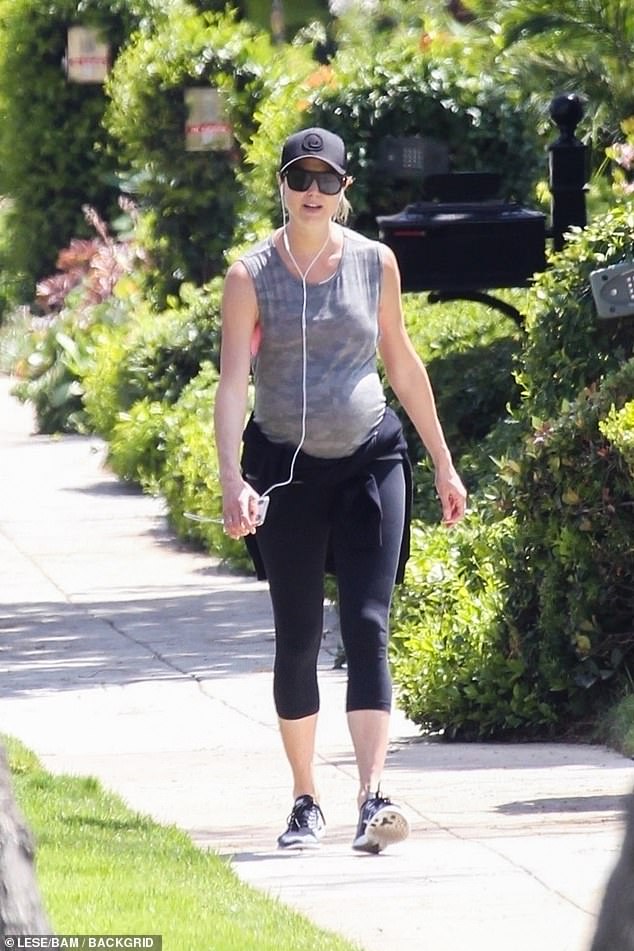 A break from lockdown: The 40-year-old, who is eight months pregnant with her third child, teamed a loose-fitting baggy grey vest top with cropped black leggings and trainers

‘Seeing the dynamic between our two kids is what made us want to have more kids,’ Keibler said.

‘We live in Jackson Hole, [Wyoming], and it’s so nice to just have a little tribe there,’ added the WWE vet who has also acted in Samurai Girl and Bubble Boy.

Pobre, 44, added ‘It’s exciting. I think once we had our second one, we totally got it and understood how to manage. 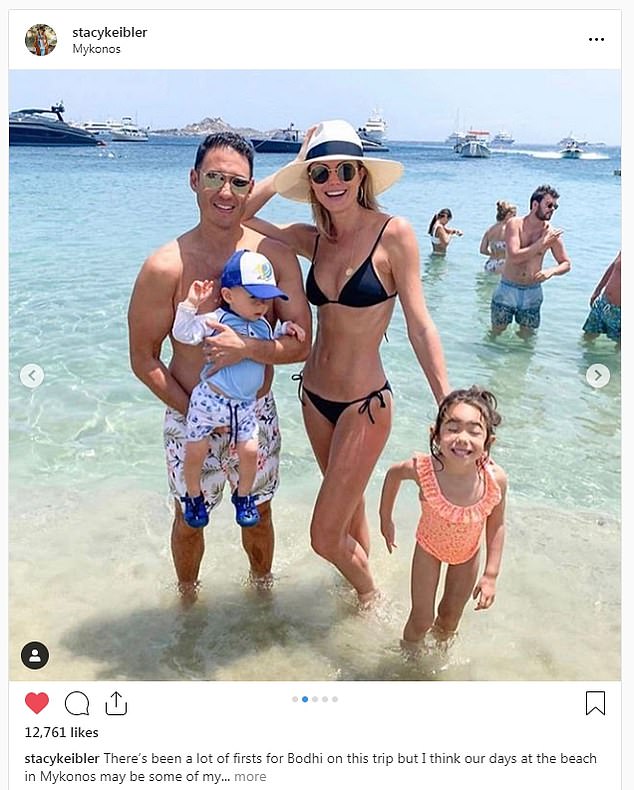 Big family: Stacy pictured with her husband Jared Pobre and their children, Ava, five and Bodhi one

They also said they only found out she was expecting in August. ‘We did it together,’ Keibler says. ‘We took a pregnancy test and literally revealed it to ourselves at the same time.

‘We wanted to wait until we were going to tell our parents,’ Pobre says. ‘So we told her basically the day before.’

‘Yeah, because she would tell everybody,’ Keibler adds. ‘Which is exactly what she did.’ 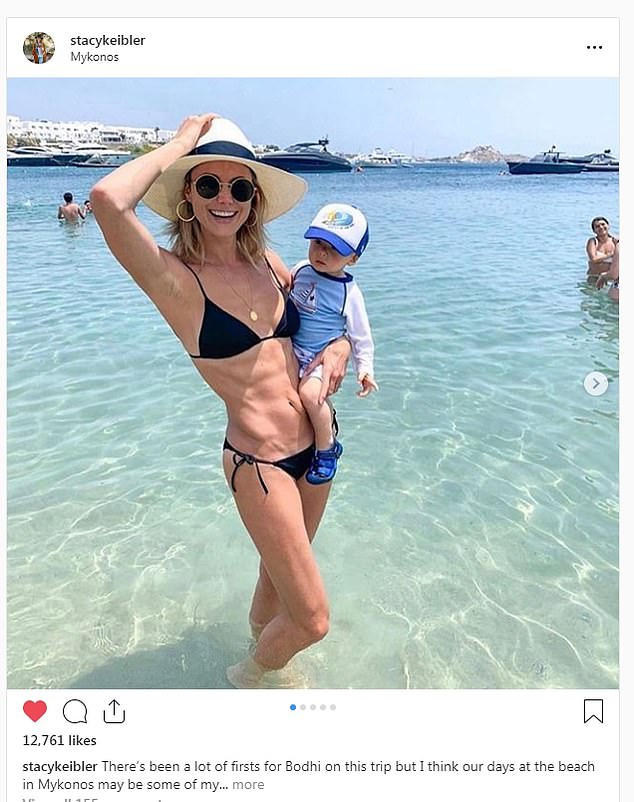 Oh mama: They also said they only found out she was expecting in August. ‘We did it together,’ Keibler says. ‘We took a pregnancy test and literally revealed it to ourselves at the same time’

‘We had a picture of the first sonogram and we brought my daughter in,’ Keibler says.

‘My son — he’s too little. He was there with us when we told Ava, but she’s five. So we expected her to be excited and we showed her a picture of the sonogram and we just said, ‘We have some really exciting news.’ ‘

‘She was so excited,’ the she added. ‘She was jumping up and down and she was just full of joy, which is heartwarming.’

Stacy said her children get along really well. 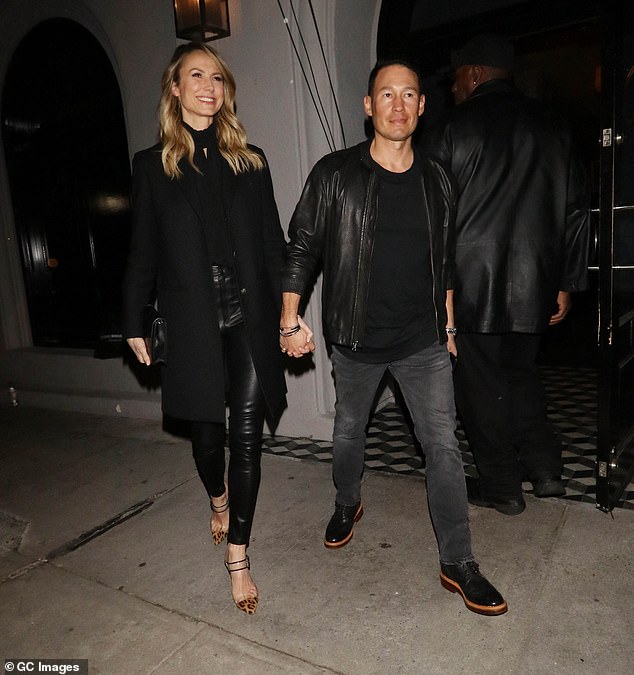 Happy days: Stacey pictured out with her husband Jared back in March 2019

She said: ‘They walk around the house holding hands and Bodhi loves his sister so much.

‘He cries when she leaves for school, and then when she comes home from school, he screams. He hears her at the door and just screams. … Seeing that every day is why we want to have more.’

‘I think my parents were pretty shocked,’ Keibler admitted.

‘I’m an only child. When I was younger, I always wanted brothers and sisters, and I was always a babysitter and had cousins and loved taking care of little kids. We hadn’t really told them that we were going to try for a third. So it was new news. They were very happy and surprised.’

And Stacey is happy with spending most of the year out of LA.

‘I really wanted to take a break from the spotlight for a little while and focus on family,’ Keibler told People.

‘Jared and I both took a few years away from our careers and even took a four-year digital detox. I was off all social media for four years and it was great. Jackson Hole is a complete opposite lifestyle of Los Angeles. So we were able to really focus on all the things that are really important to us.’ 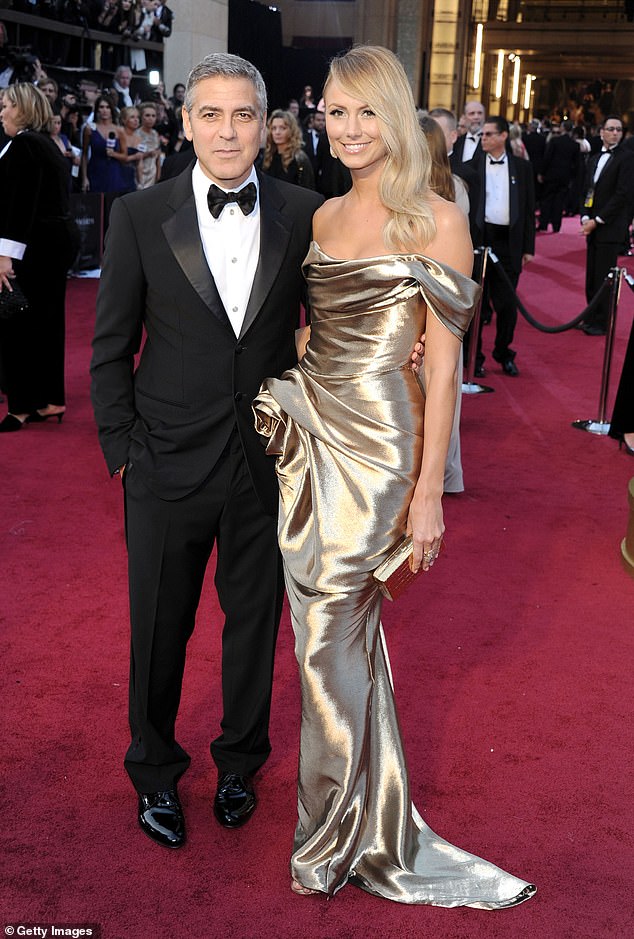 Her a list ex: Seen with Clooney (L) at the 84th Annual Academy Awards held at the Hollywood & Highland Center in 2012

Pakistan could be next polio-free nation, says WHO

Fast bowlers will have to be little more careful than others on resumption: Irfan Pathan