I First Predicted Gold 2,000 in January 2020 Based On Gold Price’s Long-Term Chart Pattern

I turned into a long-term gold bull back in 2016. My view can be seen in the article titled “GLD -The Beginning Of The Long Term Bull Cycle“, which was published in Seeking Alpha on May 22, 2016.

My long-term bullish view on the gold price was due to the fact that the Fed raised its fed fund interest rate for the first time in nine years at the end of December 2015. At that time, many feared that as the Fed enters its long-term interest rate hike cycle, gold prices will go down further. Quite a few believed that gold would fall to below $1,000.

But the fact told a totally different story. After looking at over 60 years of the Gold Price via Fed Fund Interest Rate chart (see below), I concluded that

Please read that article for a more detailed discussion.

In addition to the Fed Fund interest rates, other major forces will also have big influences behind the gold price movement:

Fast forward to 2020, I predicted that the gold price will reach 2,000 within the next 2 years in my daily Newsletter published on January 8, to my members. 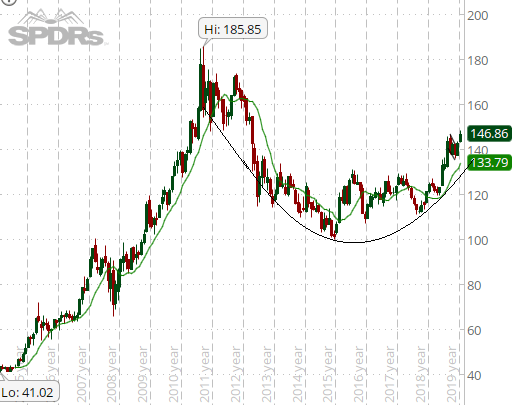 And the chart was forming a possible long-term cup-and-handle pattern. Its long-term support was at 133.70 at that time. The completion of cup formation will bring the GLD to its previous high before a handle starts to build.

Based on the definition from stockcharts.com,

As its name implies, there are two parts to the pattern: the cup and the handle. The cup forms after an advance and looks like a bowl or rounding bottom. When cup is completed, a trading range develops on the right hand side and the handle is formed. A subsequent breakout from the handle’s trading range signals a continuation of the prior advance.

That is, if my Cup-and-Handle chart reading proved to be a correct one, the GLD will revisit its previous high of 185.85 (or gold 1,917) to finish the cut formation, then develop its handle before the continuation of its advance.

Please be noted that my prediction was purely based on the chart reading or purely technical and was nothing related to the market condition, gold’s demand/supply, the US dollar strength and the possible Fed interest rate next moves.

At that time, the market was still very hot, one new all-time high followed by another one, and no one, at least I knew of, could have predicted the damages the coronavirus disease may bring to the US and the world economy even it already happened in Wuhan, China, and the US dollar was still in its long-term bull cycle run.

After the Jan. 8 Newsletter published, the gold price made a quick and big run within one month to 1,700 then pulled back, and crashed to 1,460 low last month. It seemed that my prediction may be the wrong one when the gold price crashed.

But the following development proved that the crash is just the big players’ manipulation as they did not want small investors to make easy money.

I have noticed that another bullish chart pattern was in the development: a possible inverse Head & Shoulder pattern:

Below is the chart I showed to my members on my April 3rd Newsletter: 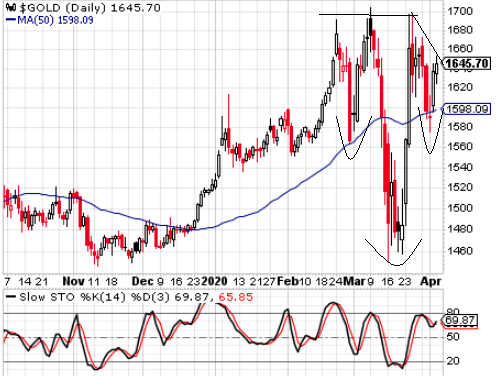 The chart showed that a non-conventional Inverse H&S pattern is in the development.

Let us look at the definition of Inverse Head & Shoulders chart pattern:

Once the price breaks its neckline, the inverse H&S pattern will be confirmed.

And it did confirm on its breakout move on April 9th: 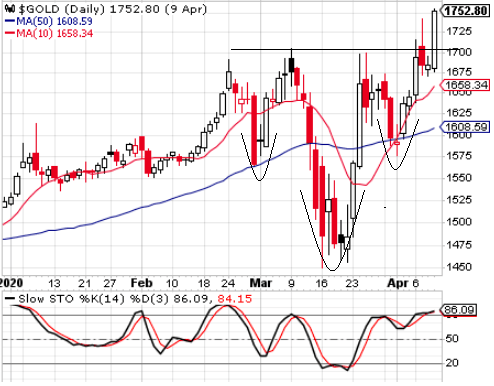 The US dollar’s daily chart indicates that the US dollar may move a little higher this week. 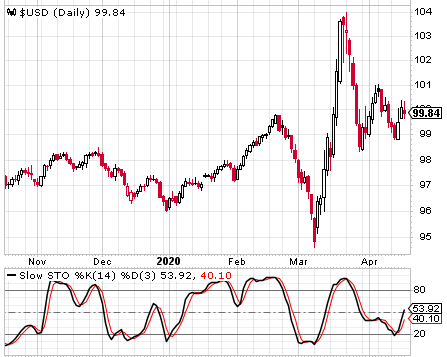 The gold will find strong support at 1,600-1,650 range. And it may not drop to that low before its run resumes. 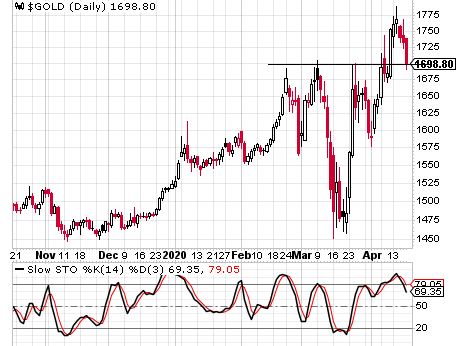 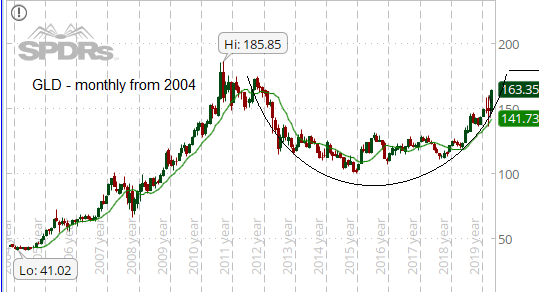 The gold needs to move to 1,917 to finish its cup formation.

The gold needs to overcome three hurdles to run to 2,000, my long-term target:

The build of the cup formation started in December 2015, and now, already lasted more than 4 years and is yet to complete.

Normally, it may take at least the same duration to build its handle. But, for the gold, the process may be shorter. But I believe that it will take at least one year to finish the process.

Investments in gold, gold miner ETF, and selected gold-related products have been good choices in the turbulent times.

More gains will be seen if the gold run resumes later. See the daily chart of GDX.

GDX – 29.94. The GDX made a breakout run from its symmetric triangle pattern to 32.27, then pulled back. The current support is at 28.00 level. The GDX is forming a bullish ascending triangle pattern. Another breakout will bring GDX to the 40-42 range. 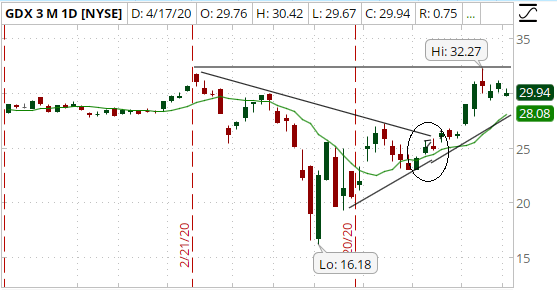 The gold current long-term bull run started in December 2015, and the run will continue. Our long-term gold target is 2,000, which is nothing related to coronavirus pandemic, US stock market crash, the strength of the US dollars, etc.

But the gold short-term price swings may be influenced by these forces.

Want to know our latest Multi-Bagger Picks and Possible Future Multi-Baggers? Please join us. Try it for two weeks free and cancel it at any time if not satisfied.

Disclosure: I/we have no positions in any stocks mentioned, but may initiate a long position in UGLD, NUGT, DRD, EGO, IAG, AEM over the next 72 hours. I wrote this article myself, and it expresses my own opinions. I am not receiving compensation for it (other than from Seeking Alpha). I have no business relationship with any company whose stock is mentioned in this article.

Ill Tell You What Else: Peter McMahon Returns