The 2021 Critics’ Choice Awards have been delayed due to the Coronavirus pandemic.

The event, which honors work in film and TV, will still take place with a live audience at the Barker Hanger in Santa Monica, California with host Taye Diggs. 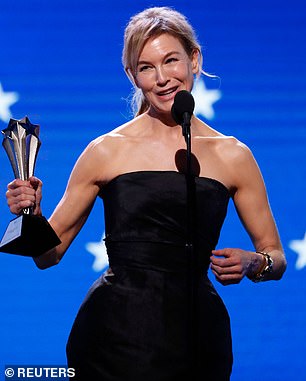 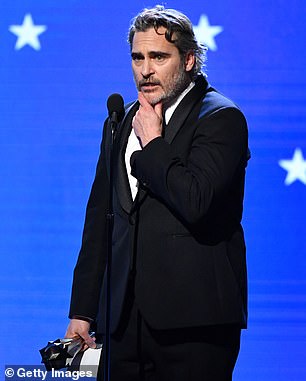 New date: The 2021 Critics’ Choice Awards have been delayed due to the Coronavirus pandemic. The ceremony was supposed to take place on January 10, 2021 but it has now been moved to March 7, 2021, it was revealed on Thursday; on the left is Renee Zellweger and on the right is Joaquin Phoenix from January 2020

‘Now more than ever, people are turning to film and television as a source of comfort, as a means of education, and as a way to connect,’ Critics Choice Association CEO Joey Berlin said.

‘With the revised timeline, we are looking forward to celebrating all of the brilliant new work created during this extended season.’

There are also new dates for submissions – November 2 for TV and February 1 for movies. 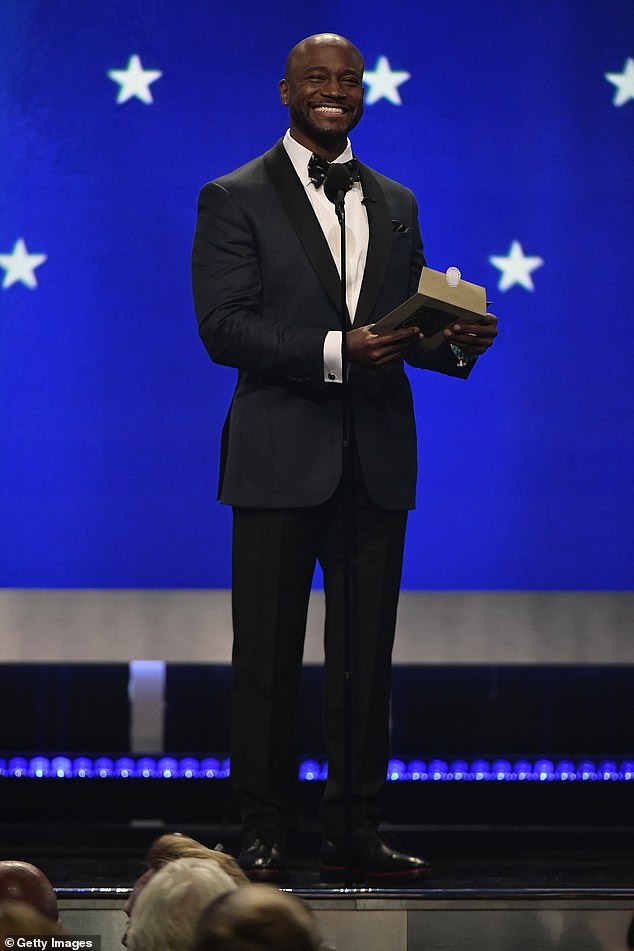 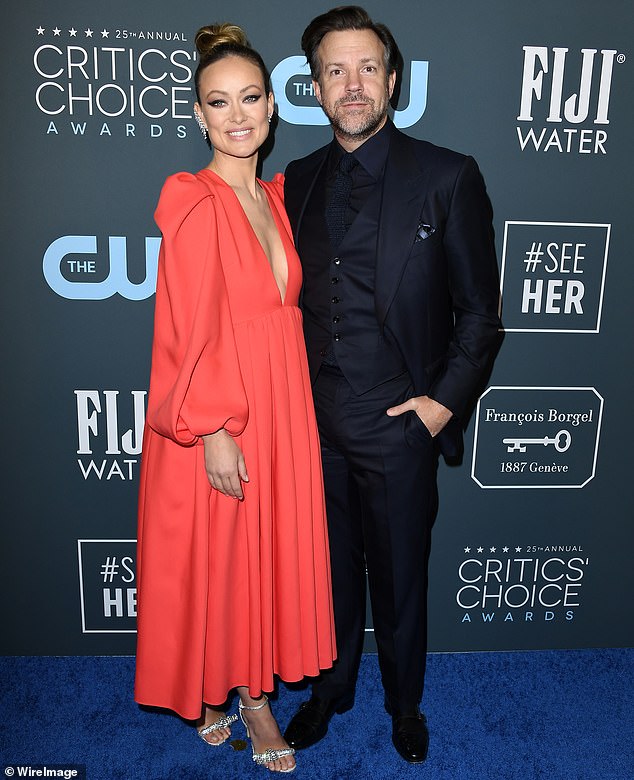 They lit up the carpet last year: Here Olivia Wilde and Jason Sudeikis are seen last year at the event

This year the event took place on January 12.

Once Upon a Time in Hollywood took home four film awards including best picture, supporting actor for Brad Pitt, original screenplay for Quentin Tarantino and production design for Barbara Ling and Nancy Haigh. 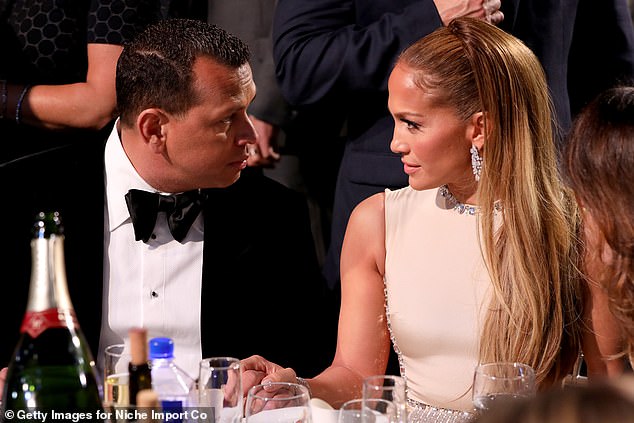 Glam couple: Alex Rodriguez and Jennifer Lopez at the 2020 show

This comes after the 2021 Academy Awards were delayed by two months.

The board of governors of the Academy of Motion Picture Arts and Sciences, who organize the annual ceremony, met via Zoom on Monday to discuss the date the 93rd Oscars will take place on.

The event was scheduled for February 28, 2021, but after the coronavirus pandemic caused chaos in Hollywood and put the movie industry on hold, the governors decided to move the ceremony to April 25, 2021, according to Variety. 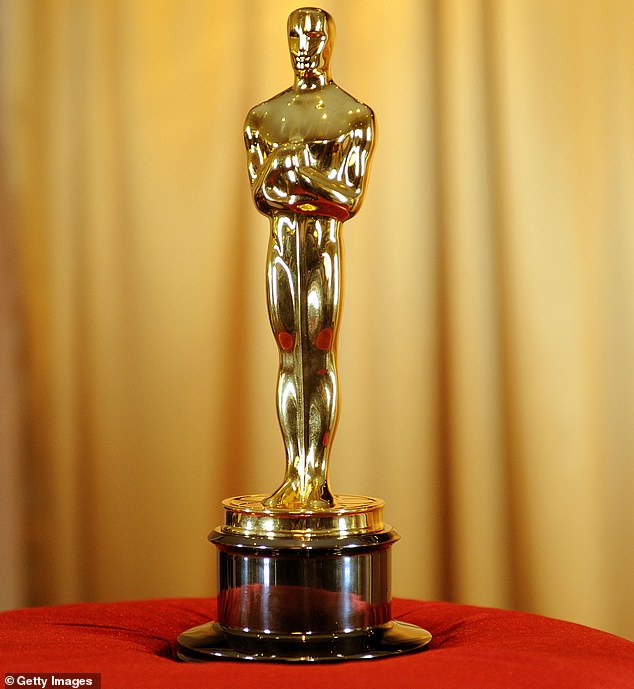 Hold on Oscar! The 2021 Academy Awards have been delayed by eight weeks 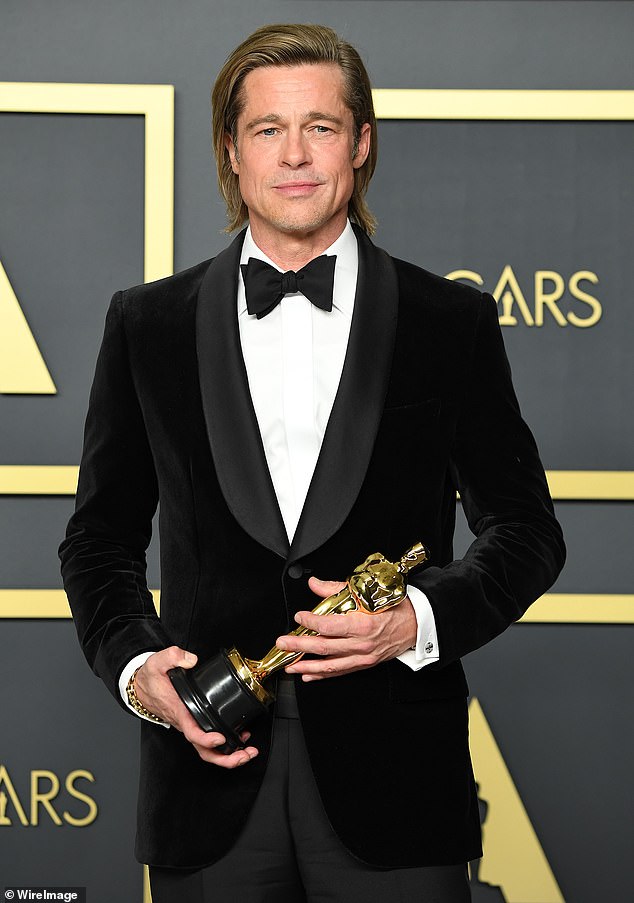 A real winner! The board of governors of the Academy of Motion Picture Arts and Sciences, who organize the annual ceremony, met via Zoom on Monday to discuss the date the 93rd Oscars will take place. Brad Pitt in February

‘For over a century, movies have played an important role in comforting, inspiring, and entertaining us during the darkest of times,’ began a statement from Academy president David Rubin and CEO Dawn Hudson.

‘They certainly have this year. Our hope, in extending the eligibility period and our Awards date, is to provide the flexibility filmmakers need to finish and release their films without being penalized for something beyond anyone’s control.’

She added, ‘This coming Oscars and the opening of our new museum will mark an historic moment, gathering movie fans around the world to unite through cinema.’

The rules have also changed.

December 1, 2020 is now the deadline for the ‘specialty categories’ such as animated feature film. 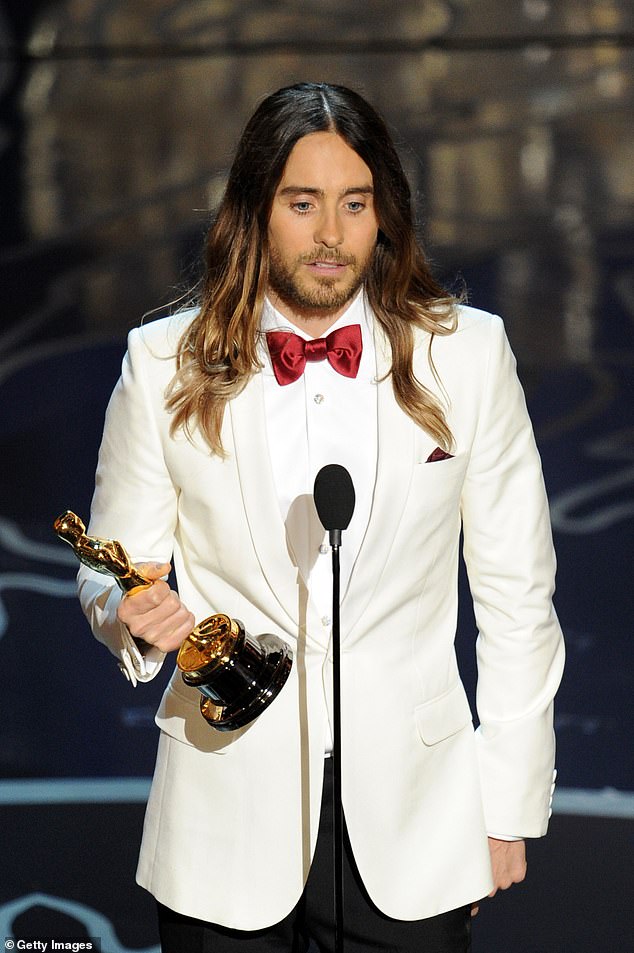 Hold up: The event was scheduled for February 28, 2021, but after the coronavirus pandemic caused chaos in Hollywood and put the movie industry on hold, the governors moved it to APril. Jared Leto seen in 2014

January 15, 2021 is the new deadline for ‘general entry categories,’ such as  best picture.

The Academy also decided the annual Governors Awards gala has been postponed to a later unspecified date.

And the Academy Museum of Motion Pictures will now open in April 2021 to line up with the Oscars rather than December 2020.

The Oscars were previously delayed on three occasions, due to flooding in Los Angeles in 1938, following the assassination of Dr. Martin Luther King, Jr. in 1968 and again in 1981, following an assassination attempt on the life of President Ronald Reagan.

In 1934, the Oscars had a 17-month eligibility window, which ran from 1 August 1932 until 31 December 1933 so thereafter the eligibility period would be a full calendar year.

This follows news that the Academy Awards are setting up a special task force ‘to develop and implement new representation and inclusion standards’ for Oscars eligibility by July 31, 2020.

The Academy of Motion Picture Arts and Sciences announced Friday that there will be now be a fixed number of 10 best picture nominees beginning with the 94th Academy Awards in 2022.

The organization is also planning to implement new eligibility requirements with an eye toward diversity in collaboration with the Producers Guild of America that will be finalized by the end of July. 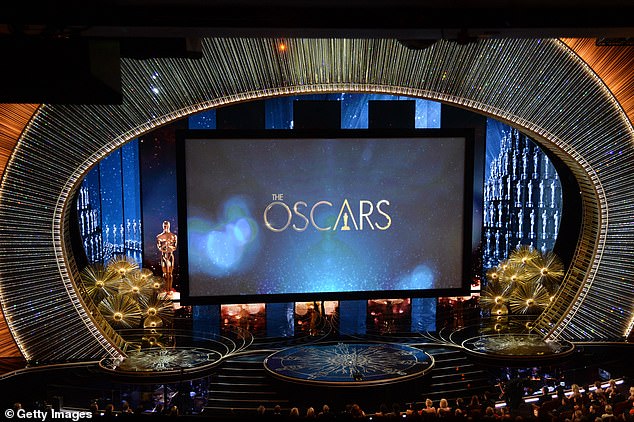 The hashtag #OscarsSoWhite was created by activist April Reign in January 2015 to call out the awards ceremony for their lack of diversity, as that year, only two people of color were nominated in major categories.

Since then, the Academy has sought to double the number of women and people of color among its membership. The Academy is now said to have 26 women and 12 people of color on its 54-person board of governors – a first for the organization – which includes director Ava Duvernay.

The most recent changes will not impact the 93rd Academy Awards set to be held in Los Angeles on Feb. 28, 2021, because it is already deep into the eligibility calendar.

The film academy has shifted the number of best picture nominees several times in its history.

In 2009, it was expanded from five to 10, which many thought at the time was in response to the lack of a nomination for Christopher Nolan’s The Dark Knight. 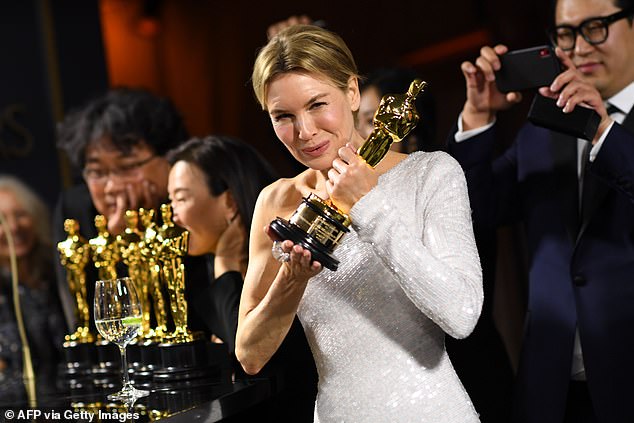 Going for gold: This year’s Best Actress winner Renee Zelwegger is seen with her statuette

In 2011, the field was allowed to fluctuate from five to 10, which led to some years having more than others.

Last year there were nine. In the Academy’s early years, anywhere from eight to 12 films could be nominated for best picture.

The organization that puts on the Oscars is also committing to a new phase of diversity and inclusion initiatives, which it calls Academy Aperture 2025. The first phase, which ended this year, was in response to the #OscarsSoWhite criticisms.

Academy President David Rubin said that the organization had surpassed the goal to double the number of women and diverse members by 2020. 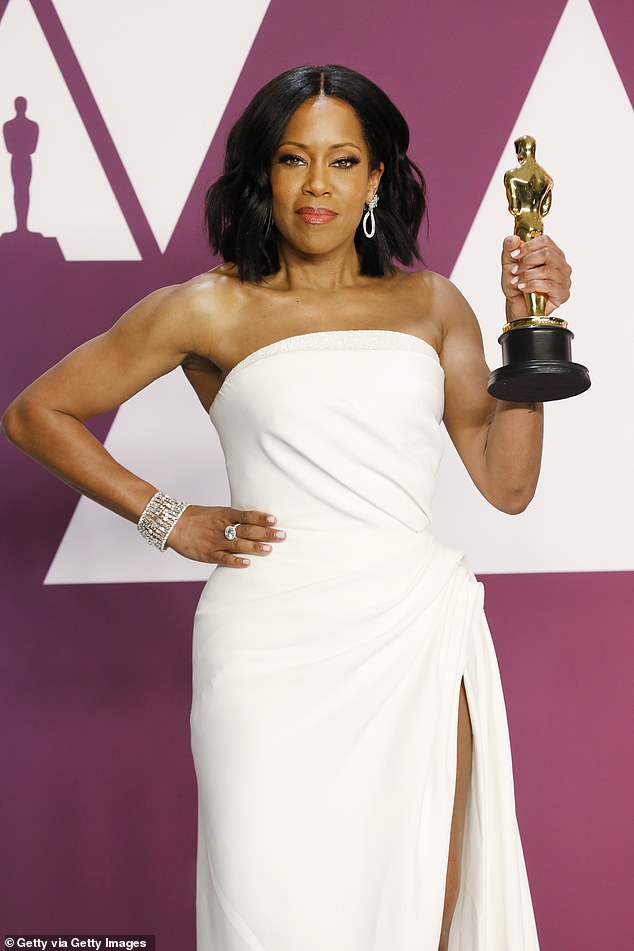 Happy lady: Regina King poses with the Oscar for Best Supporting Actress (If Beale Street Could Talk) in the press room during the 91st Annual Academy Awards at the Hollywood & Highland Center in 2019

‘While the Academy has made strides, we know there is much more work to be done in order to ensure equitable opportunities across the board,’ Academy CEO Dawn Hudson said in a written statement.

‘The need to address this issue is urgent. To that end, we will amend – and continue to examine – our rules and procedures to ensure that all voices are heard and celebrated.’

Rubin added that the leadership and board are committed to weaving, ‘Equity and inclusion into the fabric of every Academy initiative, committee, program and event.’

A newly established Office of Representation, Inclusion and Equity will oversee the Aperture 2025 initiative and be headed by Academy COO Christine Simmons.

The academy also said that it is continuing efforts to increase diversity in its membership ranks. The new class will be announced in July.

John Lewis procession to follow Selma to Montgomery route, to be honored at Alabama Capitol (montgomeryadvertiser)