Whether you are a new Salesforce Admin or someone who has built on the platform for years, the good news is that as you create and implement functionality, your skills will continue to grow. For many years as a Salesforce Admin, I worked hard to learn best practices for feature management and rolling out new functionality. But one thing I always struggled with was release management. Building new features in a sandbox and then using Change Sets just wasn’t my jam. Not to mention if I was collaborating with a developer friend on an app or my company used a Source Control System.

Now, with the DevOps Center in Salesforce, managing changes is about to become awesome!

What is the DevOps Center in Salesforce?

The new DevOps Center is the central application to be delivered with our new DevOps solution. The DevOps Center will provide an improved UI-based experience for change and release management that will not only deliver a modern and robust experience for declarative developers and admins but also allow for collaboration between declarative and programmatic developers throughout the DevOps process.

The DevOps Center is your team’s single source of truth for projects and work to be done. And you can manage this change and release process with clicks.

How do admins work with the DevOps Center?

It’s now easier to manage changes, collaborate with team members, and ensure synchronized source. The integrated experience in the DevOps Center is centered on the concept of a Work Item, which is like a “ticket” and is where the requirements for the change to be made are defined. Changes are tracked against the Work Item as they move through the flow from Planning, to Development, to Review, to Testing, to Release. From a Work Item, you can easily launch a development environment (a Developer Sandbox). The sandbox is synchronized with the source from a connected source control repository to ensure that you are developing against the latest source of truth.

In the past, you would use Change Sets to move changes from your sandbox to production. In the DevOps Center, we’ve greatly simplified and improved the experience of managing changes. Changes are tracked automatically for you as you do your development, so you simply need to click a “Pull Changes” button in the DevOps Center to identify and manage the changed source files. No more manual tracking of changes as you’re making them, nor sifting through lists of components to find the ones you want to migrate!

Once the changes have all been pulled and shown to you in the UI, you still have the ability to decide which of those files you really want to migrate forward in the process. So, for instance, if a change you made also resulted in a change to a Profile and you don’t want to migrate the Profile, or you were experimenting with changes before you settled on the final implementation and therefore don’t want to migrate all the files that you’d changed along the way, you can simply choose to ignore those files when you confirm the components to be migrated. 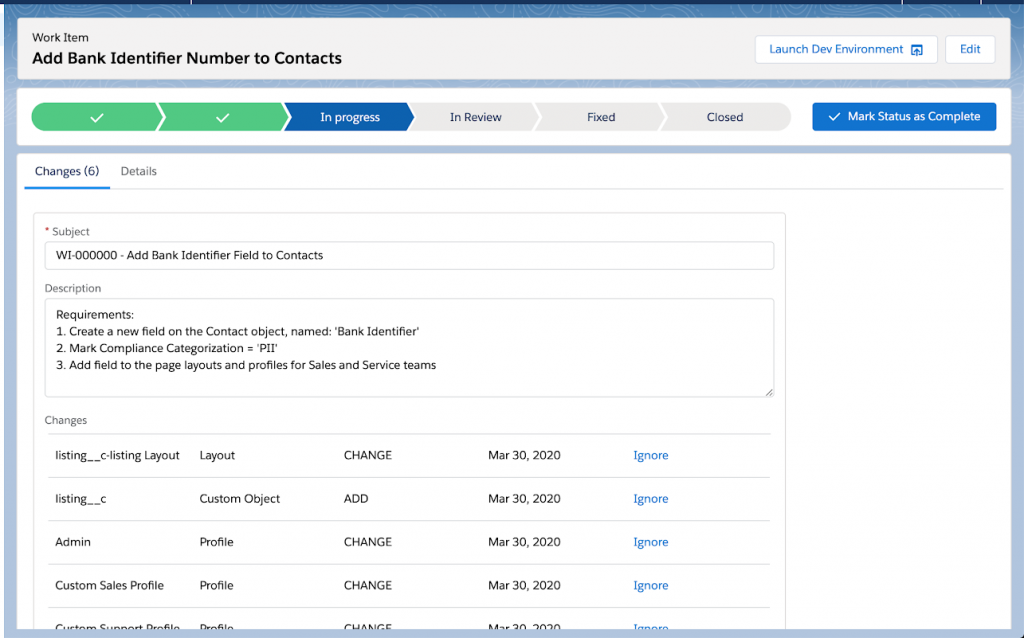 Once you have the list of changes to move forward, you can proceed with the next step: submitting the changes. This is where some more magic happens! When you submit your changes, behind the scenes, the tool commits and pushes the metadata source files into a branch in the connected GitHub repository, and also creates a Pull Request. You don’t have to run any GitHub commands directly (or really even know anything about GitHub) to be able to push these changes into the source control system. The source control system can now serve as the main point of collaboration, review, and synchronization between team members. Pretty awesome, huh!?

What does this mean for admins?

We will release a Developer Preview later this year that includes the functionality described above, allowing you to track and manage changes in a modern UI, seamlessly integrate with a version control system, and deploy based on a centralized source of truth. In subsequent releases, you can look forward to additional capabilities in the DevOps Center to provide a fully integrated UI-based experience, including test and review processes and deployment management directly from the DevOps Center. And that means following deployment best practices and collaborating with developer friends will get a whole lot more awesome!

If you would like to be added to a list to be kept informed about the Developer Preview program and how to be considered for participation, please reach out to Karen Fidelak at kfidelak [at] salesforce [dot] com.

Show HN: Making a bot for Snake with a visual language