LOS ANGELES (AFP) — Joe Biden’s choice of Kamala Harris as his running mate was hailed on Tuesday as a historic first for women of color, but some warn her record as a tough prosecutor could dent her appeal with two key constituencies — black voters and liberals.

Harris, the first woman and the first black attorney general in the history of the Golden State, portrayed herself as a progressive reformer during her own presidential bid, but some have cast doubts on that claim.

“Time after time, when progressives urged her to embrace criminal justice reforms as a district attorney and then the state’s attorney general, Ms Harris opposed them or stayed silent,” law professor Lara Bazelon wrote last year in an op-ed for The New York Times.

“Harris turned legal technicalities into weapons so she could cement injustices,” added Bazelon, a former director of the Loyola Law School Project for the Innocent in Los Angeles.

Before serving as attorney general, the 55-year-old Harris was the district attorney in San Francisco. She was elected to the Senate in 2016.

“Kamala Harris had a reputation in California as a prosecutor and attorney general who waited rather than led, who moved on controversial issues only once she saw what was politically viable,” the daily Sacramento Bee wrote in a June editorial.

As concerns police brutality — a subject very much in the news following the death of George Floyd, a black man whose killing at the hands of police in May sparked nationwide protests — Harris has also been criticized for failing to intervene in cases involving police violence.

While serving as attorney general in 2016, for example, she opposed a bill to investigate deadly police shootings following the death of a stabbing suspect — shot 21 times by police — that sparked huge protests.

Harris has in addition come under criticism for pushing legislation that would punish parents in California for their children’s truancy.

But despite her controversial record on criminal justice, Harris has also been lauded for fighting for progressive change.

Her most successful program, called “Back on Track,” called for non-violent first-time drug offenders to avoid jail by getting a high school diploma.

Just in the right place

She also initiated a project for anti-bias training for law enforcement agencies throughout California.

Arguably her biggest achievement in the eyes of civil rights activists was “Open Justice,” an online portal that made a wide range of criminal justice data available to the public, including the number of deaths and injuries in police custody. 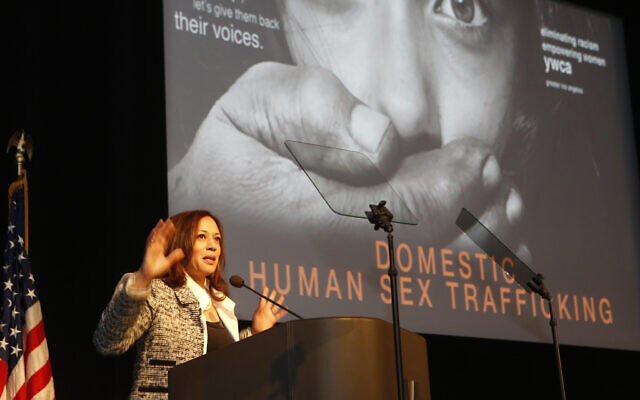 Many today reject claims that she did not go far enough in pushing for criminal justice reform, arguing she was being judged by unfair standards.

“I am a public defender, I work day and night fighting for justice in San Francisco … and the fact is that she did implement very progressive programs, period, end of story,” Niki Solis, who faced Harris many times in court when she was district attorney, told AFP.

Jack Pitney, a professor of American politics at Claremont McKenna College in California, stressed that in looking at Harris’ tenure as attorney general, one should take into account that she was acting as a prosecutor applying the law, rather than a legislator.

“As attorney general of the state of California, she had to defend laws in court whether or not she agreed with them,” Pitney said. “So to that extent, I think the criticism is misplaced.”

He said that, if anything, Harris’s justice record will be an asset as she takes on Republicans in the run-up to the November vote.

“Their criticism will enable her to say ‘look at all these progressives, they are criticizing me for being too conservative. I must be just in the right place’,” Pitney said.

Thad Kousser, a political science professor at the University of California, San Diego, said Harris’s track record as a prosecutor will likely work in her favor but also against her.

“Her smart-on-crime moderate positions on crime and social justice will help her with moderates,” Kousser told AFP. “But it could also demobilize some more young liberal voters.”

Jenny Odell and Wendy Liu on Liberating Ourselves From Usefulness