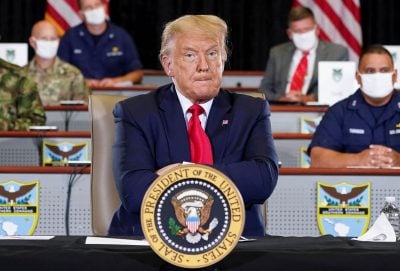 Good news or bad, he dominates the headlines and front pages of newspapers, he leads tele-vision coverage, and populates the shelves of book shops.  He doesn’t seem to  mind what is said about him as long as he is in our faces and on our minds.

His latest intrusions involve news of his failure to pay US taxes for a decade,  accusations of drug use he has levelled at Democratic presidential rival Joe Biden, charges that the Democrats are seeking to open US borders to migrants and claims that opponents of his Supreme Court nominee Amy Coney Barrett are motivated by anti-Catholic bias rather than her ultra-conservatism. Trump  castigates  scientists who contradict his untruthful claims about the corona virus and relishes unwelcome revelations and reports about him so he can reply on Twitter or elsewhere, keeping himself in the news.

He has continued to claim, falsely, that the results of the November 3rd  election will be skewed because millions will have voted by mail. Trump has hammered home this line for more than a year because more Democrats than  Republicans generally vote by mail.  This time round 69 per cent of Biden supporters plan to vote by mail as compared to 19 per cent of Trump backers who  intend to  cast ballots at the polling stations despite risks posed by COVID-19.  Trump does not care whether votes catch COVID. He even courts contagion by  campaigning in halls where hundreds of fans gather without masks or social distancing. Of course, those nearest him wear masks.

Writing in the Guardian former US secretary of labour Robert Reich argues that the ongoing presidential election campaign does not feature differences over issues and   divergent policies.  Instead, he says, “The central fight is over Donald J. Trump”.

Reich divides the US public — and electorate — into Trump’s backers and opponents, “us and them”, Trump Nation and Anti-Trump Nation. Trump  does not consider himself president of all US citizens only of his backers. In his  view people who do not support him live in a “different country.”

While I agree with Reich in principle, I have my own take on the  division. I prefer to classify the sides as the “Trump Cult” and the “Anti-Trump Camp.”   Unfortunately for the US, they do live in the same country.

Adherents of the Trump cult are, like all cultists, devoted to an individual, blind to his failings, faults and flagrant misdeeds and are prepared to go to great lengths, including adopting violence, to see him reelected. Members of the Anti-Trump Camp are motivated to oust him due to his character,  behaviour and policies. They operate as traditional political activists determined to rid the US and the world of Trump.

Trump cultists are overwhelmingly white working, lower middle class and middle class, although oligarchs finance Trump as well as vote for him.  Many Trump cultists are religious and lack higher education. Few Blacks, Latinos  and Asians vote for him. Anti-Trump campers come from all economic  groupings, are more educated, less devout, and include large proportions of Blacks, Latinos and Asians.

The motivations of Trump cultists are largely defensive and negative.  This is why they are attracted to Trump, who is defensive and delights in negativity.  Cultists are defensive because they wish to maintain White, Christian rule in a country where non-Whites are growing in number and religious observance is in decline.  In recent years, Blacks, in particular, have been demanding equality and power sharing.  Trump cultists feel detached  not only from Washington, the US capital, but also from lawmakers in their  home states. They are fundamentally anti-government and wrongly believe Republicans intend to downsize government. They resent local, state, and  national interference in their lives.

Trump cultists resent the influential elite, which has dominated US political, economic, social, educational and scientific life for many decades.  Cultists empathise with Trump’s  resentment of his predecessor Barack  Obama who, although identifying as Black, belongs to the elite.  Obama’s gentlemanly appearance,  graceful manners, and Harvard law degree have gained him admission to the elite while crude and rude Trump can never hope to secure membership.

The fact that Black Obama has succeeded where White Trump has  failed has deepened his resentment. An envious Trump is doing his best to erase Obama’s presidential legacy and is applauded by his “base” of supporters for doing so.  They also back his drive to reverse liberal legislation regulating greenhouse gas emissions and guns because they argue such measures

Anti-Trump campers are both defensive and positive. They understand   the federal government requires reform but must be protected. They are motivated by the need to rescue, protect, and maintain economic and social gains made by liberal and progressive legislation and policies in recent decades. These include health care for poorer sections of the population, the right to abortion, equal rights for all, controlling weaponry, and dealing with climate change.

The basic division of the country did not begin with Trump. It has existed since the US was founded. He has simply exploited it — loudly and persistently — to his advantage. Maps of red (Republican) and blue (Democratic) states show that Trump cultists are dominant in the south, parts of the midwest, and the north central states while the Anti-Trump camp is located in the northeast, west coast, Colorado and New Mexico.  A few purple states have mixtures of the rival parties.

The cultist population of red states, the majority of states, largely inhabits rural areas and outer suburbs of major cities and towns while campers in the blue states are concentrated in urban areas and inner suburbs.

While Trump accuses Anti-Trump campers of being “radical leftists,”Trump cultists are, in fact, radical revanchists who seek to revert to a fictitious simpler society of decades ago when Whites enjoyed superiority without challenge and to “return” to “greatness” the US never attained.

Xbox cloud gaming is coming to iOS and PC this spring