The so-called coronavirus cabinet was set to meet Thursday morning to continue mapping Israel’s exit from its second national lockdown with ministers expected to debate reopening places of worship and stores.

A main issue of contention was whether to allow stores to reopen, with the decision likely to also affect synagogues.

Finance Minister Israel Katz met Wednesday with Health Minister Yuli Edelstein in a bid to work out a plan for allowing storefronts to resume business, but the meeting ended without any agreement, according to Hebrew media reports.

Katz is pushing for all stores to be allowed to reopen next week, but Edelstein opposes doing so at this stage. 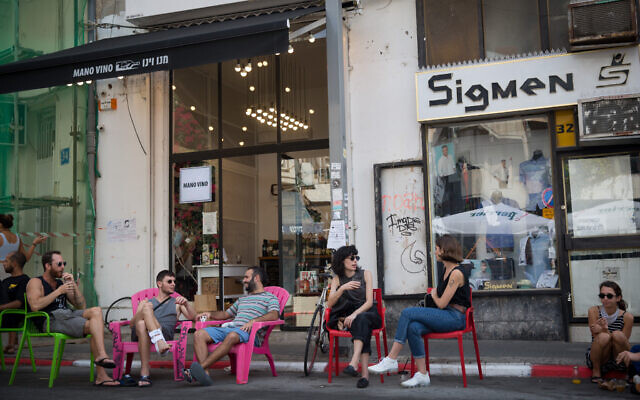 Israelis wear protective face masks as they sit in the streets in the Levinsky market in Tel Aviv, on October 28, 2020. (Miriam Alster/Flash90)

Under the current virus restrictions, gatherings of up 10 people are allowed indoors and up to 20 outdoors, though synagogues and other houses of worship are barred from opening.

Earlier this month it was reported that some ministers were expected to demand that synagogues be reopened if stores were allowed to operate.

However, reports on Wedneday said that Synagogues may be allowed to reopen as soon as Sunday.

According to a report by the Kan public broadcaster, Edelstein has dropped his opposition to allowing synagogues to reopen, on the condition that attendance indoors is capped at 10 and outdoors at 20. 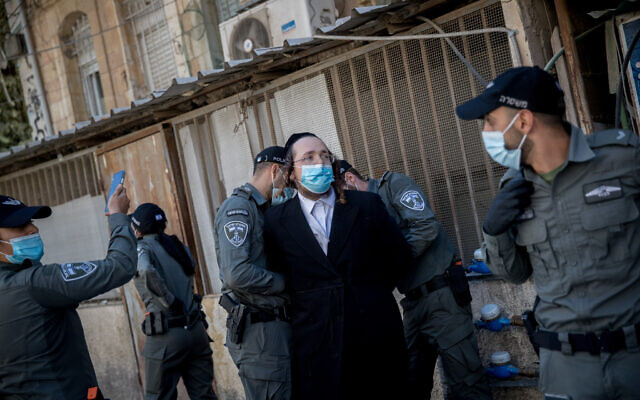 Israeli Police officers arrest an ultra-Orthodox Jewish man during a raid on a synagogue that was opened against the coronavirus emergency regulations, at the Geula neighborhood in Jerusalem, October 14, 2020. (Yonatan Sindel/Flash90)

A separate report from Channel 12 news said that outgoing coronavirus czar Ronni Gamzu has signaled he won’t oppose the reopening of synagogues.

Schools and many businesses have been shut since September 18, when Israel began a lockdown aimed at suppressing the rapidly spreading virus, which had turned the country into a global COVID-19 hotspot.

Preschools reopened on October 18, and ministers in the coronavirus cabinet on Monday night approved the reopening of schools for children in first to fourth grade early next week.

They also okayed the lifting of a series of other restrictions aimed at containing the pandemic. They also approved the reopening of hairdressers, beauty salons and other businesses that serve a single customer at a time starting on Sunday.

According to the Health Ministry’s nine-stage lockdown exit plan, business openings would only occur at the third stage, set for November 15 at the earliest.

The steep drop in cases, however, has led many to seek a quicker rebound than the Health Ministry advises.

Following the initial coronavirus lockdown in the spring, health officials abandoned their staged plan amid pressure from ministers and opened nearly all schools and businesses at once in early May. That move has been blamed for playing a part in runaway infection rates over the summer, which multiplied when schools opened on September 1.

The Health Ministry said 518 new coronavirus cases were confirmed by 10 p.m. Wednesday, bringing the number of infections since the pandemic began to 312,550. The death toll rose to 2,494, with 11 new deaths since Tuesday night.

U.S. Will Vaccinate Most Americans by End of Summer