WASHINGTON (AP) — Joe Biden won the battleground prizes of Michigan and Wisconsin on Wednesday, reclaiming a key part of the “blue wall” that slipped away from Democrats four years ago and dramatically narrowing US  President Donald Trump’s pathway to reelection.

A full day after Election Day, neither candidate had cleared the 270 Electoral College votes needed to win the White House. But Biden’s victories in the Great Lakes states left him at 264, meaning he was one battleground state away from crossing the threshold and becoming president-elect.

That total includes Arizona’s 11 electoral votes, which The Associated Press and Fox News have called for Biden, but other organizations consider it still in play with Trump closing the gap on Biden.

Biden, who has received more than 71 million votes, the most in history, was joined by his running mate Kamala Harris at an afternoon news conference and said he now expected to win the presidency, though he stopped short of outright declaring victory.

“I will govern as an American president,” Biden said. ”There will be no red states and blue states when we win. Just the United States of America.” 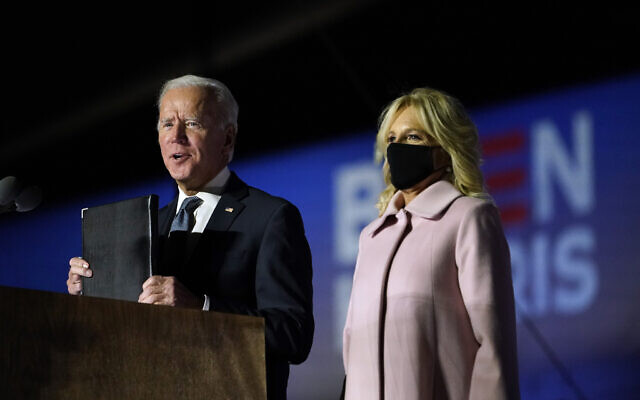 It was a stark contrast to Trump, who on Wednesday falsely proclaimed that he had won the election, even though millions of votes remained uncounted and the race was far from over.

The AP called Wisconsin for Biden after election officials in the state said all outstanding ballots had been counted, save for a few hundred in one township and an expected small number of provisional votes.

Trump’s campaign requested a recount, thought statewide recounts in Wisconsin have historically changed the vote tally by only a few hundred votes. Biden led by 0.624 percentage point out of nearly 3.3 million ballots counted.

Since 2016, Democrats had been haunted by the crumbling of the blue wall, the trio of Great Lakes states — Pennsylvania is the third — that their candidates had been able to count on every four years. But Trump’s populist appeal struck a chord with white working-class voters and he captured all three in 2016 by a total margin of just 77,000 votes.

Both candidates this year fiercely fought for the states, with Biden’s everyman political persona resonating in blue-collar towns while his campaign also pushed to increase turnout among Black voters in cities like Detroit and Milwaukee.

It was unclear when or how quickly a national winner could be determined after a long, bitter campaign dominated by the coronavirus and its effects on Americans and the national economy. But Biden’s possible pathways to the White House were expanding rapidly. 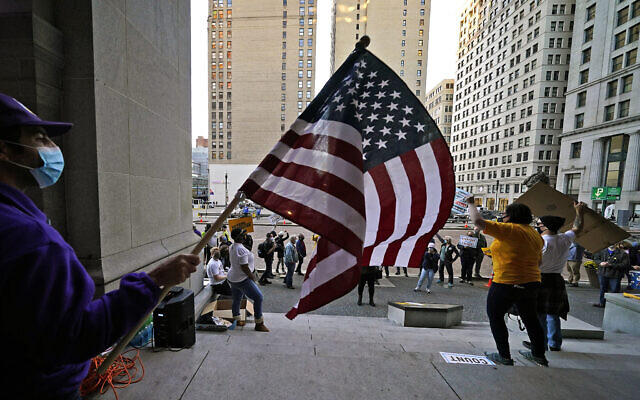 A group supporting the counting of every vote gathers on the steps of the City-County Building in downtown Pittsburgh, Wednesday, Nov. 4, 2020. (AP Photo/Gene J. Puskar)

After the victories in Wisconsin and Michigan, he was just six Electoral College votes away from the presidency. A win in any undecided state except for Alaska — but including Nevada, with its six votes — would be enough to end Trump’s tenure in the White House.

Trump spent much of Wednesday in the White House residence, huddling with advisers and fuming at media coverage showing his Democratic rival picking up key battlegrounds. Trump falsely claimed victory in several key states and amplified unsubstantiated conspiracy theories about Democratic gains as absentee and early votes were tabulated.

Trump campaign manager Bill Stepien said the president would formally request a Wisconsin recount, citing “irregularities” in several counties. And the campaign said it was filing suit in Michigan, Pennsylvania and Georgia to demand better access for campaign observers to locations where ballots are being processed and counted, and to raise absentee ballot concerns.

At the same time, hundreds of thousands of votes were still to be counted in Pennsylvania, and Trump’s campaign said it was moving to intervene in the existing Supreme Court litigation over counting mail-in ballots there. Yet, the campaign also argued that it was the outstanding votes in Arizona that could reverse the outcome there, showcasing an inherent inconsistency with their arguments.

In other closely watched races, Trump picked up Florida, the largest of the swing states, and held onto Texas and Ohio while Biden kept New Hampshire and Minnesota and flipped Arizona, a state that had reliably voted Republican in recent elections.

The unsettled nature of the presidential race was reflective of a somewhat disappointing night for Democrats, who had hoped to deliver a thorough repudiation of Trump’s four years in office while also reclaiming the Senate to have a firm grasp on all of Washington. But the GOP held onto several Senate seats that had been considered vulnerable, including in Iowa, Texas, Maine and Kansas. Democrats lost House seats but were expected to retain control there. 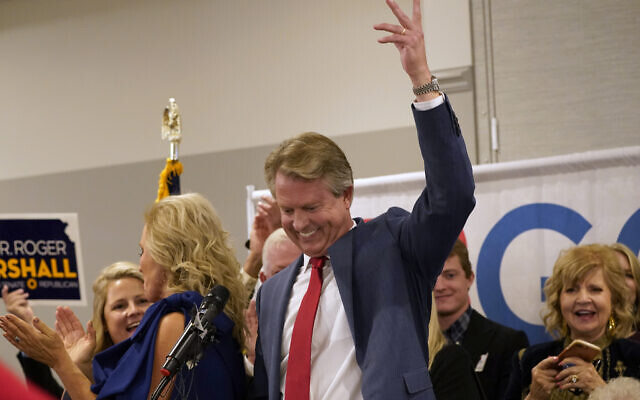 The high-stakes election was held against the backdrop of a historic pandemic that has killed more than 232,000 Americans and wiped away millions of jobs. The US on Wednesday set another record for daily confirmed coronavirus cases as several states posted all-time highs.

The candidates spent months pressing dramatically different visions for the nation’s future, including on racial justice, and voters responded in huge numbers, with more than 100 million people casting votes ahead of Election Day.

Trump, in an extraordinary move from the White House, issued premature claims of victory — which he continued on Twitter Wednesday — and said he would take the election to the Supreme Court to stop the counting. It was unclear exactly what legal action he could try to pursue.

Senate Majority Leader Mitch McConnell discounted the president’s quick claim of victory, saying it would take a while for states to conduct their vote counts. The Kentucky Republican said Wednesday that “claiming you’ve won the election is different from finishing the counting.”

Vote tabulations routinely continue beyond Election Day, and states largely set the rules for when the count has to end. In presidential elections, a key point is the date in December when presidential electors met. That’s set by federal law. 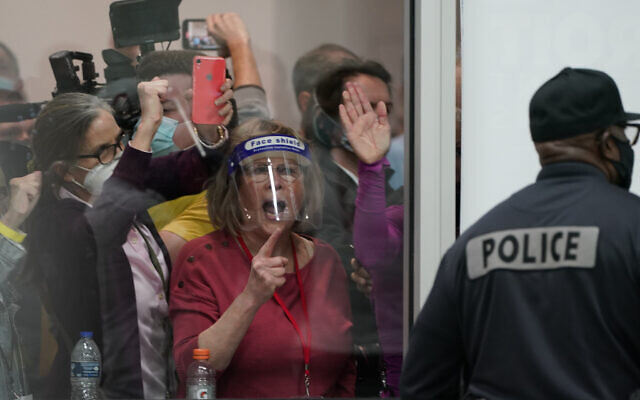 Election challengers yell as they look through the windows of the central counting board as police were helping to keep additional challengers from entering due to overcrowding, Wednesday, Nov. 4, 2020, in Detroit. (AP Photo/Carlos Osorio)

Dozens of demonstrators gathered in Detroit Wednesday afternoon, in a square across from the city’s election commission office. Many wore yellow sweatshirts and carried signs reading “Count Every Vote.” Rai Lanier, one of the organizers, said they had planned the gathering so anxious people could come together and channel that energy into hope.

“This is how democracy is supposed to work,” she said

Several states allow mailed-in votes to be accepted as long as they were postmarked by Tuesday. That includes Pennsylvania, where ballots postmarked by Nov. 3 can be accepted if they arrive up to three days later.

Trump appeared to suggest those ballots should not be counted, and that he would fight for that outcome at the high court. But legal experts were dubious of Trump’s declaration. Trump has appointed three of the high court’s nine justices — including, most recently, Amy Coney Barrett.

The Trump campaign on Wednesday pushed Republican donors to dig deeper into their pockets to help finance legal challenges. Republican National Committee Chairwoman Ronna McDaniel, during a donor call, spoke plainly: “The fight’s not over. We’re in it.”

The momentum from early voting carried into Election Day, as an energized electorate produced long lines at polling sites throughout the country. Turnout was higher than in 2016 in numerous counties, including all of Florida, nearly every county in North Carolina and more than 100 counties in both Georgia and Texas. That tally seemed sure to increase as more counties reported their turnout figures.

Voters braved worries of the coronavirus, threats of polling place intimidation and expectations of long lines caused by changes to voting systems, but appeared undeterred as turnout appeared it would easily surpass the 139 million ballots cast four years ago.

Times of Israel Staff, contributed to this report