Investors are throwing caution to the wind, driving the broad market to all-time highs on vaccine-driven hopes that the pandemic will come to an end at some point next year. Yesterday’s announcement that Moderna (MRNA) has a vaccine for Covid-19 that is more effective and easily stored than the one produced by Pfizer (PFE) and its development partner BioNTech SE (BNTX) is phenomenal news. I am sure we will see similar announcements from other companies in the weeks ahead. There is finally a light at the end of the tunnel of this pandemic, but it is still a very long and dark tunnel that we must travel through to reach that light. Investors are investing as though we will reach it tomorrow.

Both the Moderna and Pfizer/BioNTech SE vaccines may receive emergency use authorization before year end, but a full Biologics License Application approval by the FDA will take several more months. There is typically a six-month safety follow up, which may be shortened depending on the perceived risks. This means that distribution to the general public won’t occur until the middle of next year, which assumes that these companies can mass produce their vaccines by then.

We don’t know how long immunity will last with these vaccines, and we don’t how well they will work with different segments of the population. There will be a logistical nightmare in terms of how to rapidly distribute the vaccines, as well as how states will vaccinate hundreds of millions of people. Lastly, there is a growing skepticism about the safety of the vaccines, because of the perception that the process was rushed and politicized. A recent STAT Harris poll found that 42% of Americans said they would not take a coronavirus vaccine. The bottom line is that it is great news we now have two effective vaccines, but markets have responded as though the entire population has already been vaccinated. Everything must go right in order for this to happen by the second half of next year. That is a long time for investors to wait, ignoring the carnage that lies ahead with the stock market indices at all-time highs. 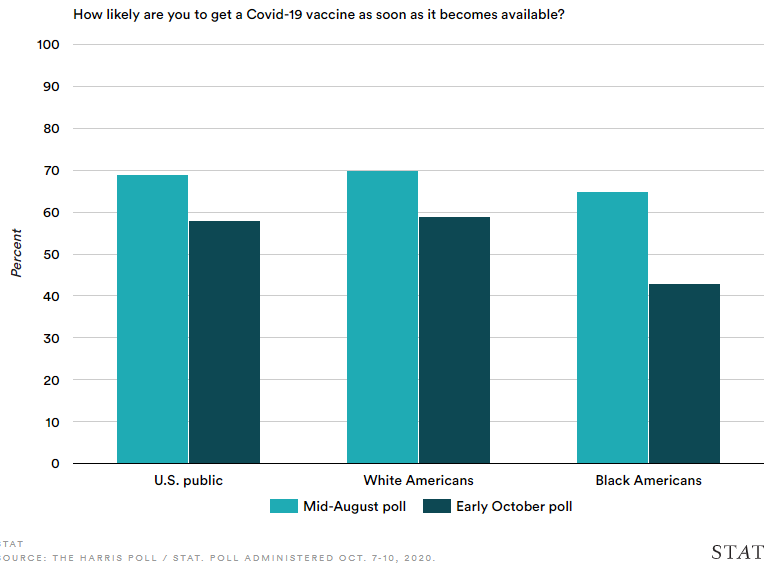 The Pandemic Rages On

Meanwhile, the pandemic rages on with new highs in cases and hospitalizations every day. At the peak of the first wave of the pandemic in April our healthcare system was overrun with nearly 60,000 Covid-19 patients. At the peak of the second wave we were better prepared with nearly the same amount, but the number of new cases each day had more than doubled to approximately 70,000. Now we face more than one million new coronavirus cases over the past week with more than 73,000 hospitalized as the numbers go parabolic, and investors could care less, so it would seem. 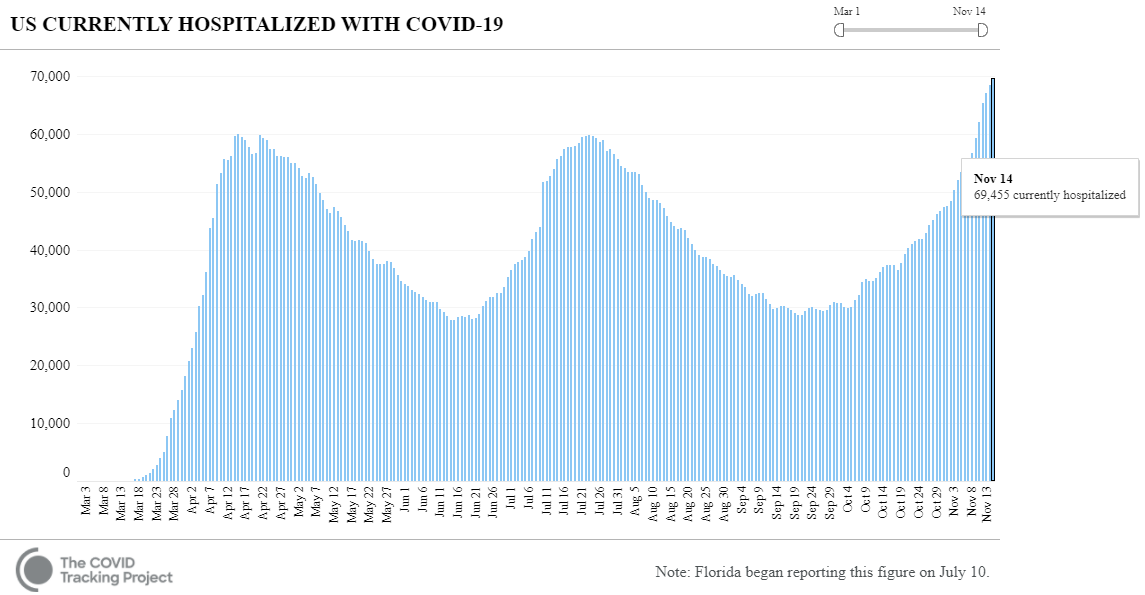 In a microcosm of what is to come in the weeks and months ahead, yesterday the state of Oregon issued a two-week lockdown, prohibiting gatherings of more than six people outside of one’s household. Violations are considered misdemeanors with $1250 fines per person. Bars, gyms, museums and skating rinks are closed, and restaurants are reduced to takeout business.

The state of Washington announced that effective Monday all indoor gatherings outside of one’s household are prohibited for one month unless participants quarantine for 14 days in advance. Outdoor gatherings are limited to no more than five people outside of one’s household. Indoor operations at gyms, bars, restaurants, movie theaters, bowling alleys and museums are banned.

New Mexico announced a two-week stay-at-home order that starts Monday whereby all nonessential businesses have been ordered to cease in-person activities. Even North Dakota is taking steps to slow the spread by suspending high school sports and extracurricular activities for one month and limiting indoor dining to 50% capacity. The city of Chicago also goes into lockdown on Monday, insisting residents only leave home for essential activities and not hold gatherings with anyone outside their immediate household. Lastly, yesterday afternoon the majority of California was ordered back into lockdown by Governor Newsom, which is particularly troubling given the states contribution to overall GDP.

I’ve been warning this would happen for weeks and that the economic consequences would be severe. The rush to reopen before lowering our baseline was bound to lead to a resurgence that is only beginning, essentially wasting the $2.2 trillion we borrowed to support the economy during the lockdown this summer. The states that impose restrictions lasting several weeks will see significant declines in economic activity and tax revenues, as well as significant increases in job losses and business closures. This is likely to spread across the country in what could lead to a double-dip recession. That’s my worst-case scenario. There are no vaccines that will prevent this massive economic headwind.

At the same time economic activity is being significantly restricted to avoid another crisis in our healthcare system, Congress has failed to provide another round of aid to support the small businesses that will be impacted and more than 21 million who are still unemployed.

We have another massive fiscal cliff looming in six weeks when millions of unemployed American workers will lose their benefits. That is when the Pandemic Unemployment Assistance (PUA) and Pandemic Emergency Unemployment Compensation (PEUC) programs expire. There are 9.4 million contractors and self-employed workers who rely on the PUA, and another 4.1 million who have exhausted their 26 weeks of state benefits and switched to the PEUC for an additional 13 weeks of benefits. This number has been climbing rapidly as more of the 6.8 million receiving regular state benefits reach their limit. Therefore, more than 13 million will have no income to start 2021.

Many of those who lost their jobs in the early days of the pandemic were able to save stimulus checks and enhanced benefit payments of $600 per week, which led to a surge in personal savings. That savings more than compensated for the loss of income and fueled the robust rally in consumer spending we saw this summer. Today there isn’t much fuel left in the tank in terms of savings to compensate for the end of all benefits for more than 13 million unemployed. 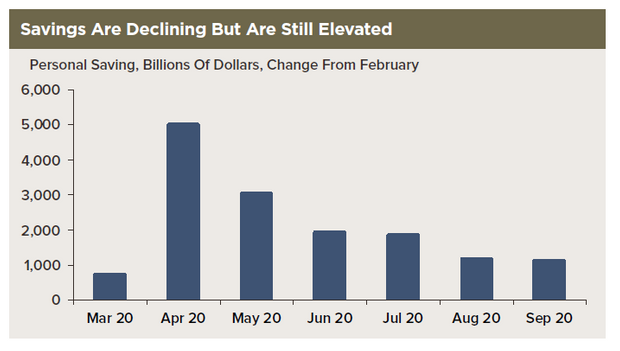 The Stock Market Is Not The Economy

The apex of this pandemic will arrive this winter with millions still unemployed and thousands of small businesses struggling to stay afloat. Without additional financial assistance, this is a recipe for disaster. A dozen vaccines that are 100% effective will not avert the permanent damage that will result, unless Congress acts immediately. Unfortunately, the announcements that we have effective vaccines, as well as the stock market’s euphoric response, dissuades Congress from acting with the necessary urgency. The stock market is not the economy, but the two inevitably cross paths over time, and that may be the catalyst that forces legislators to act.

In March of this year the stock market was fully discounting the economic headwinds in front of us, and it started to rally when there was an unprecedented monetary and fiscal response. I pointed this opportunity out by identifying the capitulation phase of the bear market and began putting cash to work. The S&P 500 was trading 21.2% below its 200-day moving average at that time and clearly oversold. The rally that ensued was discounting the economic recovery that followed. 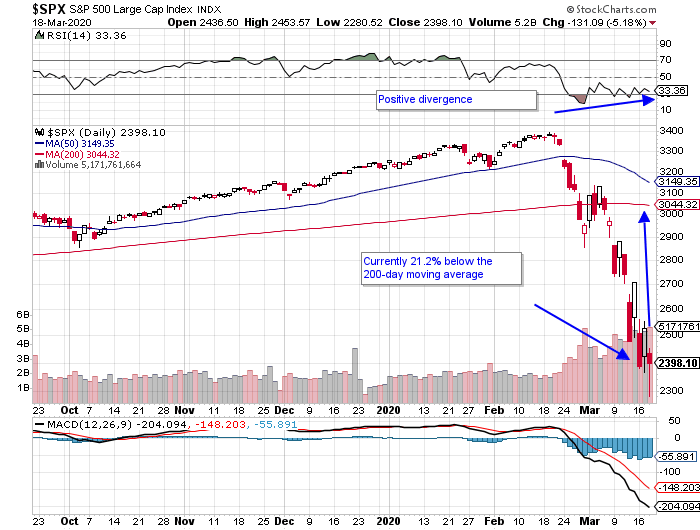 Today we have the opposite scenario, as the S&P 500 is trading more than 28% above its 200-day moving average and discounting nothing but perfection moving forward. I don’t see any fiscal response that warrants today’s market valuations, and I don’t think that a monetary response like the one we had in March is possible. 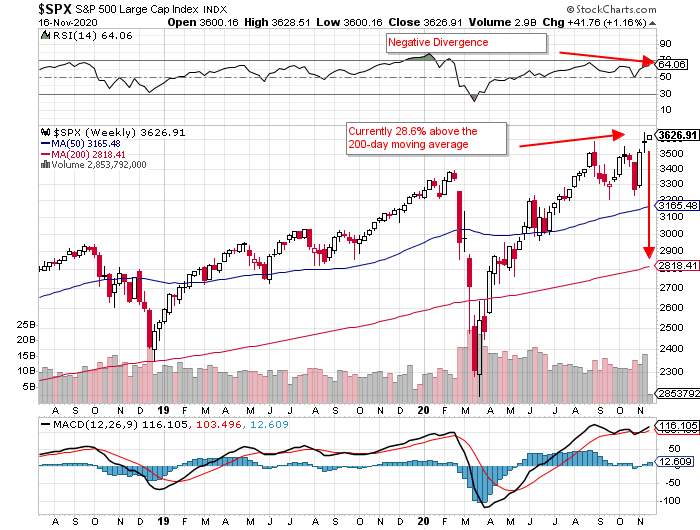 Lots of services offer investment ideas, but few offer a comprehensive top-down investment strategy that helps you tactically shift your asset allocation between offense and defense. That is how The Portfolio Architect compliments other services that focus on the bottom-ups security analysis of REITs, CEFs, ETFs, dividend-paying stocks and other securities.

The Portfolio Architect was defensively positioned at the beginning of this year in anticipation of the bear market that followed, but were you? If not, consider a two-week free trial to see how it may help you be better positioned for the next major turning point in the markets.

Disclosure: I/we have no positions in any stocks mentioned, and no plans to initiate any positions within the next 72 hours. I wrote this article myself, and it expresses my own opinions. I am not receiving compensation for it (other than from Seeking Alpha). I have no business relationship with any company whose stock is mentioned in this article.

Additional disclosure: Lawrence Fuller is the Managing Director of Fuller Asset Management, a Registered Investment Adviser. This post is for informational purposes only. There are risks involved with investing including loss of principal. Lawrence Fuller makes no explicit or implicit guarantee with respect to performance or the outcome of any investment or projections made by him or Fuller Asset Management. There is no guarantee that the goals of the strategies discussed by will be met. Information or opinions expressed may change without notice, and should not be considered recommendations to buy or sell any particular security.