By Valerie Edwards For Dailymail.com

The bodies of three family members believed to have died in a double murder-suicide were discovered by a pool service employee at a home in Florida this week.

According to the Lake County Sheriff’s Office, the employee was checking on the Clermont home located in the Crescent Lake Club subdivision on Tuesday morning when he noticed a foul odor.

Deputies who arrived to the scene forced entry into the home and discovered a married couple in their 70s and their special needs son, who was in his 50s, deceased. 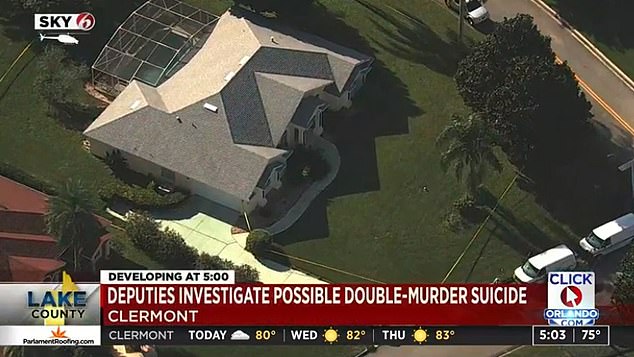 The bodies of three family members believed to have died in a double murder-suicide were discovered by a pool service employee at a home in Florida this week. Authorities said the woman and her husband were in their 70s and their son was in his 50s

‘Based upon the preliminary observations of the scene, it appears that this may be a double murder-suicide,’ Lake County sheriff’s Lt John Herrell told WKMG.

Herrell said they believe the wife fatally shot her husband and their son before turning the gun on herself.

Authorities were led to that conclusion based on documents that were found in the home and appeared to show that the wife had likely been planning on killing her family.

‘It is very sad. Yeah, it’s one of those cases that I just hate to see,’ Herrell said.

‘It’s heartbreaking and we wish there could have been a better way around whatever the family was dealing with but yeah, very tragic, very sad especially this time of year, no doubt,’ Herrell told the news site.

Investigators said the family was last seen three weeks ago when the husband returned home after receiving treatment at a hospital.

None of the victims have been identified. It’s unclear what he was being treated for but it’s believed he had ‘significant health issues’.

Police said it’s still unclear when they died and an investigation is ongoing.