Jurgen Klopp has made six changes to his side from midweek, with Takumi Minamino making his first Premier League start this season at the Amex.

The Reds are out for an immediate response after a rare Anfield defeat merely 63 hours ago, where a victory against Brighton will ensure Liverpool remain top of the table, at least on points, at the end of the weekend’s fixtures.

Brighton will present another challenge, however, as their performances to date have failed to be reflected on the final scoresheet.

With little downtime between games and injuries still to consider, the boss was limited in his options this afternoon but was still able to make six changes to his side.

Alisson will remain between the sticks with Fabinho and Nat Phillips at the heart of the defence, with Neco Williams and Andy Robertson at full-back.

In midfield, Gini Wijnaldum‘s heavy schedule continues alongside James Milner in a double-pivot in what is expected to be a 4-2-3-1 system.

And Diogo Jota and Roberto Firmino return to the starting lineup to lead the line alongside Mohamed Salah and Takumi Minamino.

Jordan Henderson is fit enough to take his place on the bench after recovering from injury, while the boss also has the likes of Curtis Jones and Sadio Mane to call on – while Joel Matip is not present in the matchday squad.

Meanwhile, ex-Red Adam Lallana will start from the bench for Brighton. 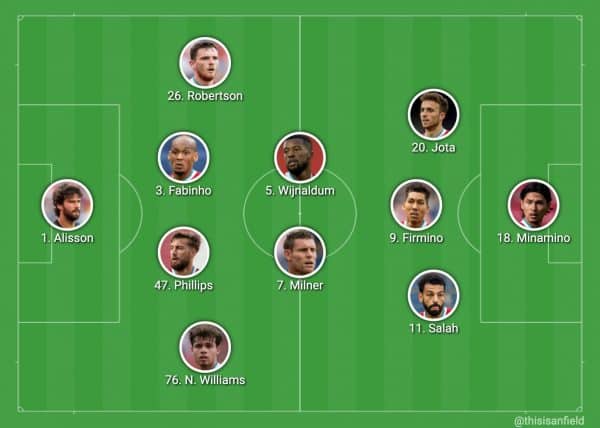 Ibidapo-Obe, Ajeyalemi might have got COVID-19 at wedding party