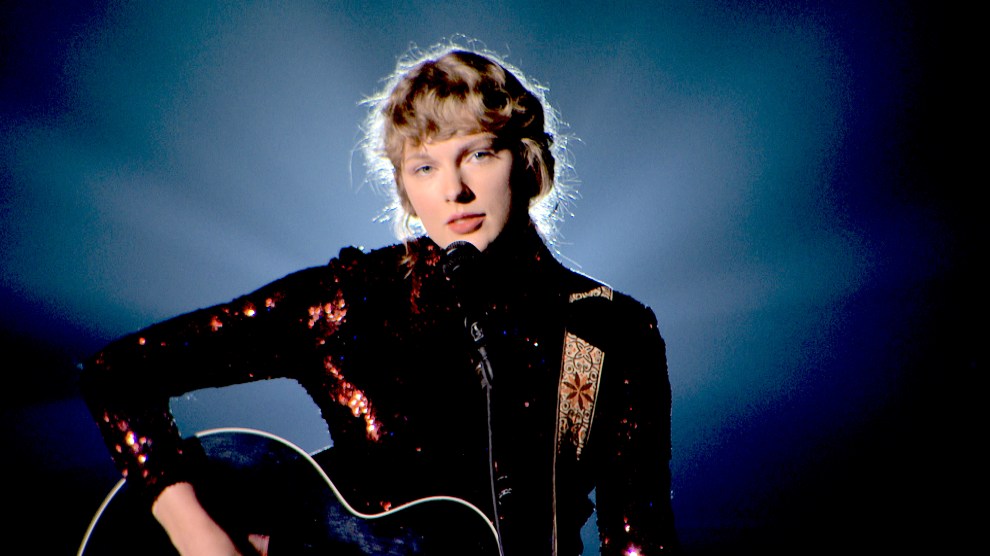 NASHVILLE, TENNESSEE SEPTEMBER 16: In this screengrab, Taylor Swift performs onstage during the 55th Academy of Country Music Awards at the Grand Ole Opry on September 16, 2020 in Nashville, Tennessee. The ACM Awards airs on September 16, 2020 with some live and some prerecorded segments.ACMA2020/Getty Images for ACM

Let our journalists help you make sense of the noise: Subscribe to the
Mother Jones Daily newsletter and get a recap of news that matters.

We Swifties at Mother Jones have a tradition of posting our live reactions to Taylor Swift’s new releases (much to our editor-in-chief’s chagrin). The occasion of Taylor’s surprise second pandemic album, evermore, was no exception.

This time, Digital Media Fellows Sam Van Pykeren and Abigail Weinberg were joined by Senior Designer Grace Molteni, who had to step out toward the end of the listening sesh but whose track-by-track reviews were added in later. And, between the important phone calls about the Biden transition that she had to take for her important work, our politics reporter Kara Voght dropped in to make a few comments along the way.

Grace Molteni: Not the sea shanty tune I was hoping for, but I’ll take it.

Abigail Weinberg: This definitely feels like a reprisal of folklore.

Sam Van Pykeren: There will be no better album starter than “the 1” but this is really good—it’s a total sister, same ethos and sound, yet the tone and stories are just a bit different.

GM: It makes sense if the first few songs are transitions. “Begging for you to wreck my plans, that’s my man.” Sounds like men to me.

AW: It reminds me of “The Louvre” by Lorde. “Blow all my friendships to sit in hell with you.”

SVP: Ugh champagne problems…it was written by just her and Joe, her boy.

AW: I kind of hate the way she sings “champagne problems.” This album is like, Swift listened to Carrie and Lowell and cried a few times.

GM: Sat in the same room as Sufjan, sad by proximity.

AW: So why do we think it’s champagne problems? Why champagne?

GM: Her problems are cute and expensive and bubbly. And sometimes give you a headache.

GM: Taking me on a journey.

GM: Starting with a siren chorus and now we’re dancing. Love a contrarian vocab in a pop song.

SVP: These Aaron Dessner strings tho.

GM: This sure does feel like running into your ex in your small town.

KV: There’s such a road not taken vibe to this too.

SVP: There always is with Taylor!

KV: Like, there’s always that person who you weren’t ever going to be with. But you revisit them like a bad habit.

AW: The one that got away.

SVP: “the 1” was literally all of this. But I love how the guitar strings really capture the longing of a homegrown lost love.

GM: Her early longing songs had those plucky strings—“Teardrops On My Guitar.”

KV: You could imagine her in her bedroom at home doing this.

GM: Didn’t feel like it could have happened anywhere other than a small hometown.

SVP: There’s something special to a love that’s captured and grown within the boundaries of home.

KV: That’s evolution: If this were Red she would have put big drums and strings behind it.

GM: You feel like these are visceral memories and people, and not just a rough shape of a person that we can pour our own lost love into.

SVP: The thing I’ve really enjoyed about folklore, and now evermore, is how self-aware Taylor’s become about herself in relationships. It’s so prevalent in this track, but also throughout these two albums.

GM: It’s like she’s learned the power of her voice and her story without having to add volume.

KV: I think evermore is better than folklore. There, I said it.

AW: I’m liking the sound of this so far.

SVP: Best track on the album.

KV: evermore is everything she’s ever done well, but at its apex.

AW: For a song called “happiness,” this sure sounds sad!

GM: I will be promptly adding this to my “sad bitch juice” playlist to drown in at a future date.

SVP: These lyrics are some of her best imo! This feels like the sister of “mad woman.”

SVP: What is anger if not a manifestation of sadness?

GM: My anger protects me from my sadness.

AW: This song is too long. Sorry to be a wet blanket

AW: So what is this song about?

AW: I saw someone tweet that Taylor can’t be bi, because if she were she would have announced it for clout a long time ago, lmaoooo.

GM: I think she’s more private than people give her credit for!

SVP: Sexuality is complicated and look at how long it took her to “come out” politically lol.

AW: Yeah that’s a good point. I do conceptualize this song, and the whole Betty and James situation, as more of a fantasy than a coming out.

SVP: Yeah, I think Dorothea is a character, like Betty.

GM: The change in tone of folklore and evermore may have also opened up space to explore those songs.

SVP: One of the least memorable songs for me.

AW: But it’s got The National!

GM: Beam me up saddies.

AW: A lot of these songs are just dragging.

GM: Reminds me of “invisible string.”

SVP: I love that Taylor is finally going through her 2011 alt-Tumblr phase. I think this is the Mumford and Sons dude in the background, which makes it all so good.

GM: For a song this long, I’m surprised by how repetitive it is.

SVP: “Forever is the sweetest con”…ouch.

AW: Seems like she won out in the end…“I always felt I must look better in the rearview.”

SVP: It’s so self-aware and mature. I love watching people come into their adult selves.

AW: “Your nemeses will defeat themselves before you get the chance to swing.”

GM: I can imagine dancing in my kitchen cleaning to this song.

SVP: This is about her grandma.

SVP: Reminds me of my dead grandmother, lol. I really don’t have anything easy to say about this song. I could listen to it on repeat, write a whole personal essay on it. Makes me feel very deep things about my family.

GM: I haven’t lost a family member I was close to, but this does make me think about the women in my life who have shaped me.

AW: I like the opening of closure, the industrial sound.

GM: I like that it’s a song about closure, but about not needing closure.

SVP: I know, this album overall has a much more intimate and slow feel than folklore.

SVP: Eh, I take back intimate. They’re both intimate. This is just a bit slower, which at first comes off maybe more intimate than it actually is.

AW: Another track with Bon Iver.

SVP: This is so much better than “exile.”

GM: It feels like a better fit both for her and Justin. It doesn’t feel like either of them are trying to be someone else or tell someone else’s story.

AW: “Floors of the cabin creaking under my step.” Cottagecore Taylor.

SVP: Best thing to come out of 2020 was cottagecore.

That’s it for the in-real-time listening experience, now it’s time for some of our post-album reflections.  .

AW: Honestly, I didn’t like it as much as folklore. I feel like the schtick got kind of old and the songs were repetitious. The highlight was “no body, no crime.” But that’s just based on an initial listening. It might grow on me.

SVP: Interesting! I think I still like folklore more too, as a whole body. I’m personally more attuned to a more pop sound, it’s where I find my connection with music, and I think that she combined that with this new sound—and her old sounds—really well on folklore, whereas this one is definitely more of the slow and steady variety. But yeah, “no body, no crime” is an absolute smash.

AW: You’ve listened to it, what, four times now? How has your impression of the album changed since your initial listen?

SVP: It’s definitely grown on me with each listen! That is for sure. Initially, I had the impression that this was more intimate and real than folklore, but I don’t think that’s fair to say at all because they both offer intimacy in different ways?

SVP: And folklore had moments that just shone so brightly. evermore feels a bit dull in its shadow.

SVP: But it makes sense because this is essentially one huge album!

Immigrant Families Reconnect To Cultural Practices During the Pandemic