DOZENS OF PEOPLE gathered outside Blanchardstown Garda Station earlier today to protest the death of a man shot multiple times by gardaí in Dublin.

Mr Nkencho was involved in two separate incidents in the Hartstown Shopping Centre at around 12.15pm. In both instances, he had threatened members of the public with a knife.

He was shot several times by gardaí in Manorfields Drive in Clonee, Co Dublin at approximately 12.35pm.

One member of the crowd said the “community are wondering ‘how many more Georges are we going to have to mourn?’”

The hashtag #JusticeForGeorgeNkencho is also trending on Twitter in Ireland this afternoon. 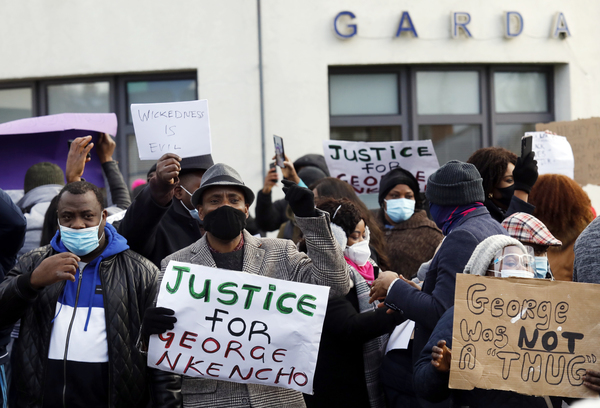 People outside the Blanchardstown Garda Station in Dublin protesting the death of George Nkencho yesterday.

In one incident, a staff member in the EuroSpar received facial injuries. That man is receiving treatment in hospital for his injuries. Moments later, Mr Nkencho was involved in a public order incident in the local post office.

Uniform and unarmed gardaí responded to the scene and observed a man in possession of a knife.

He continued to threaten members of the public and unarmed gardaí with the knife, a garda statement said.

Gardaí followed Mr Nkencho on foot and in vehicles from the Hartstown Shopping Centre towards Manorfields Drive, Dublin 15.

Multiple videos taken by members of the public in the moments leading up to his death show the 27-year-old, who it is understood had experienced mental health issues, walking across a green area and being followed by marked and unmarked garda cars.

Mr Nkencho was shot several times at Manorfields Drive during the stand-off.

He was pronounced dead after being transferred to Connolly Hospital in Blanchardstown.

The Garda Síochána Ombudsman Commission (GSOC) is investigating the incident.

GSOC is appealing for anyone who potentially witnessed the incident yesterday to come forward.

The  agency said it would like to hear from anyone who may have captured the incident on CCTV, dashcams or mobile phone footage.

Anyone with information which may be of assistance to the investigation is asked to contact GSOC at 1890 600 800 or info@gsoc.ie or DM @GardaOmbudsman.

The family of George Nkencho has appealed for people to not share footage of the incident online.

In a statement, Mr Nkencho’s sister Gloria said her brother was “suffering from serious mental illness and those who knew him know the type of person he was, he was not a thug nor a criminal”.

No news is bad news


“Thank you all for your condolences and prayers. My siblings and I have witnessed the most traumatic experience of our lives as our brother was shot in front of us.

My family greatly appreciate everything everyone is doing. I kindly ask to refrain from sharing the video of the shooting. It is not something I wish to be reminded of.

Government ministers have spoken about the incident, with Justice Minister Helen McEntee describing the events as “extremely traumatic”.

“George Nkencho’s death is a tragedy, and I want to extend my sympathy to his family, friends and community and to all involved in yesterday’s events,” she said.

“Gardaí are engaging with the local community and I know they understand their concerns and anguish.” 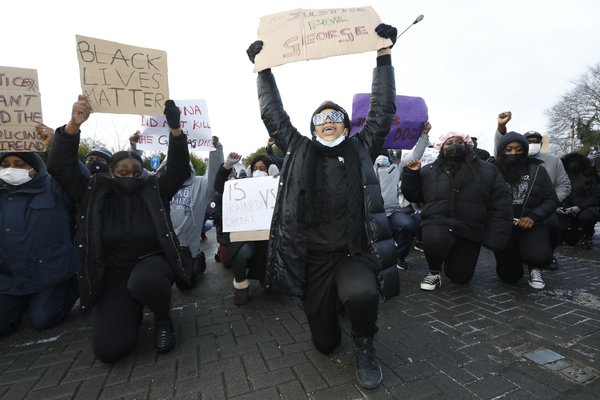 “My sympathies go to the family of the young man who lost his life in Clonee yesterday. Thoughts also with the Gardai and shop workers who were involved in the incident,” he said.

Children’s Minister Roderic O’Gorman said he is “deeply saddened by the tragedy”.

“My thoughts are with the family of the young man who was killed. The Garda Ombudsman (GSOC) are carrying out an independent investigation and it is really important to provide them with all relevant information,” O’Gorman said.

An Garda Síochána is also appealing for people to contact them with information, in particular any person:

• who was in the Eurospar, post office or general vicinity of Hartstown Shopping Centre at approximately 12.15pm yesterday, or
• who were in the vicinity of Cherryfield and Manorfields estates, Dublin 15, between midday and 12.35pm yesterday
• any person who may have CCTV or other video footage of these incidents

– With reporting by Órla Ryan.