Almost 70,000 people are developing coronavirus symptoms every day in the UK, researchers warn.

The team behind the ZOE Covid Symptom Study app, carried out with King’s College London, say the number of people reporting symptoms each day is up 27 per cent in a week from 55,226 to 69,958.

It comes after the Office for National Statistics estimated at the start of this week that more than 1.1million people are currently infected with the disease.

The staggering numbers add to evidence that the second wave is out of control, as Department of Health officials have announced more than 50,000 new positive tests every day for the last 10 days, meaning over half a million people have been diagnosed in less than a fortnight, and the true number of cases is likely to be far higher.

As an inevitable result of soaring cases, the number of hospital patients is now above 30,000 and higher than ever, and a tragic 1,162 deaths were announced yesterday.

Britain is now in its toughest and longest lockdown since last spring and may not emerge from it until all the most vulnerable groups have been vaccinated against Covid-19. The Government has ambitious plans to immunise 13.9m by mid-February and Boris Johnson claims it will be able to give 200,00 jabs a day by next week.

The Covid Symptom Study, which uses reports from around one million people who have the app on their phones, showed that cases have been surging non-stop since the effects of England’s second lockdown wore off in early December 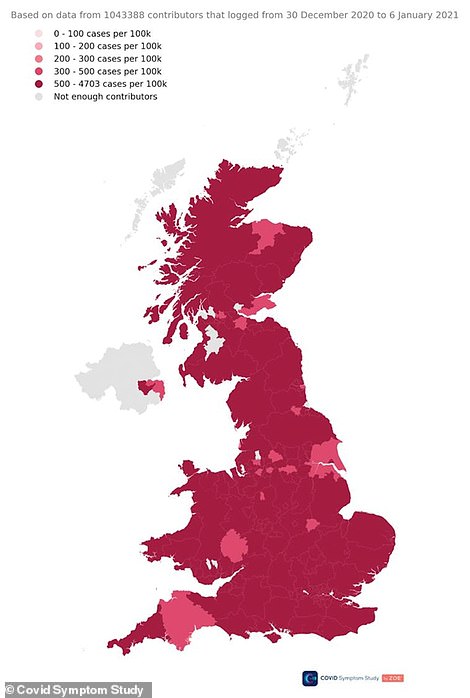 The Covid Symptom Study app data suggests that coronavirus outbreaks are worst in London and Wales and least bad in Devon, the Humber and Bath and Somerset

The ZOE and King’s team predict that the reproduction rate (R) of the virus is above one in all parts of the UK and that the outbreak is worst in London.

Professor Tim Spector, the King’s College epidemiologist leading the study, said today: ‘The UK is now worryingly at 70,000 new daily cases and around 800,000 infected individuals, and the worst hit areas continue to be Wales, London and the South East.

‘Our ZOE survey data is the most reliable source of the changing rates of infection over the holiday fortnight.

‘One in 42 people in London has symptomatic COVID now, so those living in the capital must take care. The good news is that we are now seeing new cases in London coming down slightly.

‘These figures are from the 3rd of January suggesting numbers had started to fall just before the announcement of the English national lockdown.’

The numbers produced by the Covid Symptom Study are based on reports from a million regular users of the mobile app, who log whether they feel ill as well as the results of any coronavirus tests they have taken.

It is unofficial but is the largest surveillance programme in the country, although it cannot estimate the number of people with coronavirus but without symptoms.

The data in this week’s report suggests that London is by far the worst affected region of the country, with an estimated 16,813 people getting symptomatic Covid-19 every day this week.

Infections were lowest in the South West, where there were 3,464 infections per day, and in North West. There were between 5,000 and 6,000 per day in each of Scotland, Wales, the North West and the North East and Yorkshire.

This picks up on infections whether people have symptoms or not, and this week estimated a staggering two per cent of the population has coronavirus – one in every 50 people. This rose as high as one in 30 in London. 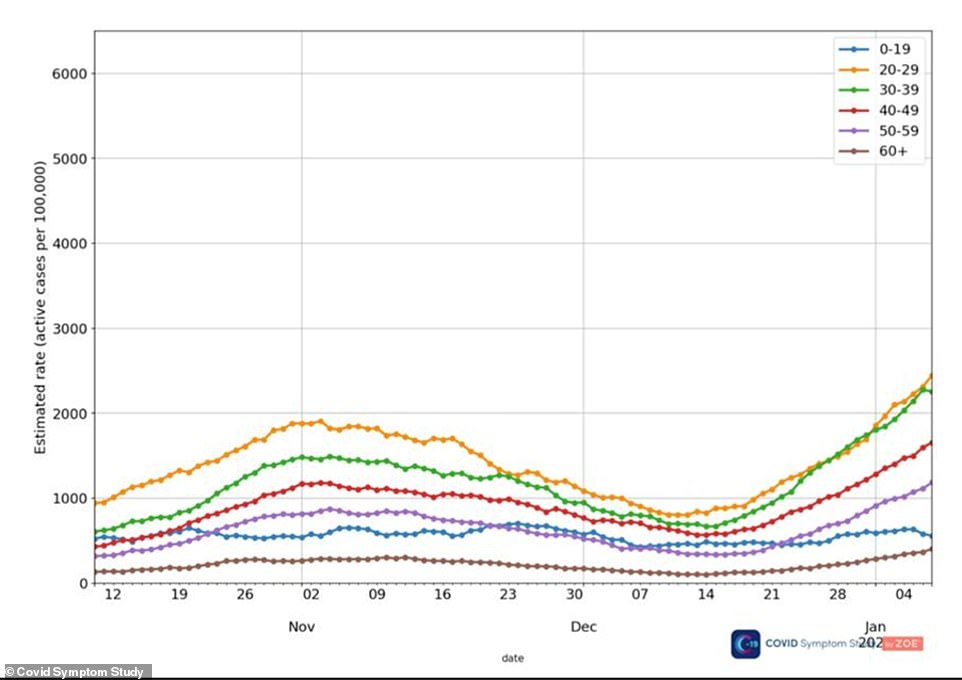 Chee Soon Juans event at void deck of Bukit Batok block requires permit or it would be illegal: Police