She welcomed her first child with husband Rio Ferdinand at the end of last year.

And Kate Ferdinand enjoyed her first drink since becoming pregnant, as she took to Instagram to share a snap on Friday.

The former TOWIE star, 29, posted a photo of a full wine glass complete with ice and a straw to her Stories. 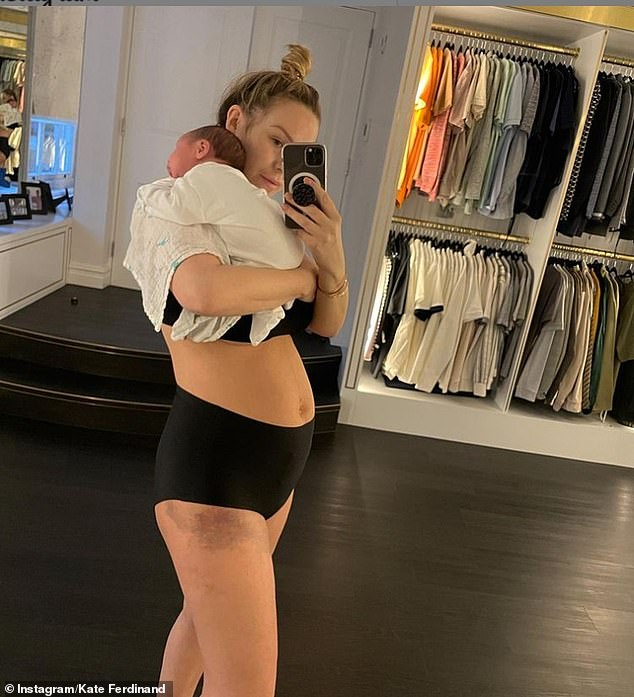 New mum: Kate Ferdinand enjoyed her first drink since becoming pregnant as she took to Instagram on Friday

Last Sunday, she candidly admitted that she has been feeling exhausted since her son Cree was born by emergency caesarean just before Christmas.

Taking to Instagram, she revealed she was feeling ‘tired’ after she opened up about her ‘traumatic’ delivery earlier in the week. 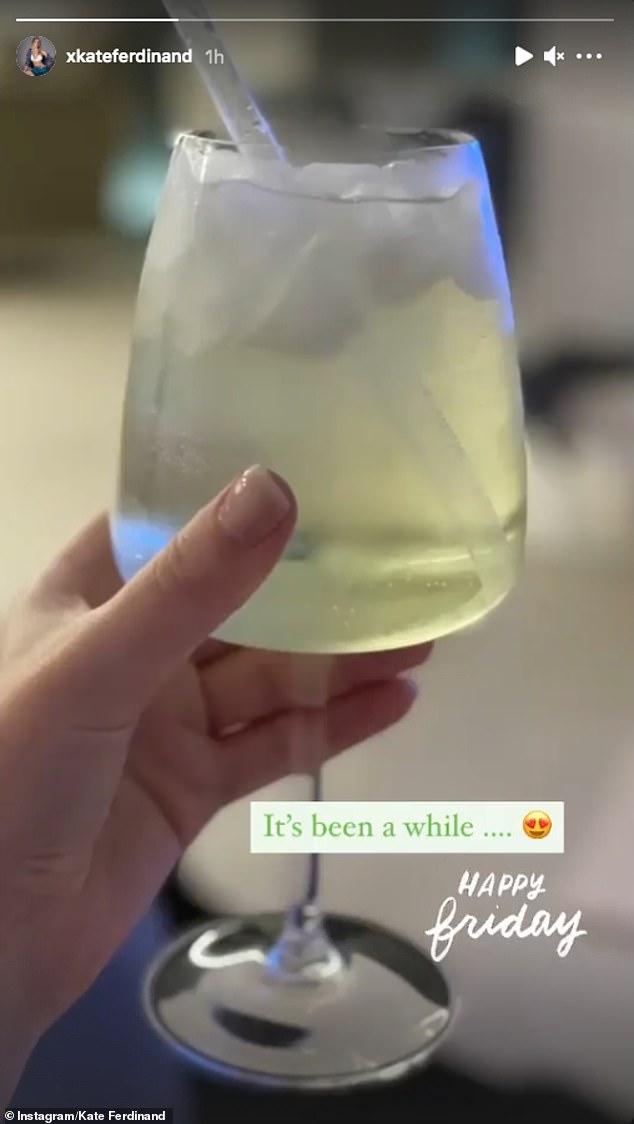 Happy Friday: The former TOWIE star, 29, posted a photo of a full wine glass complete with ice and a straw to her Stories as she captioned the post: ‘It’s been a while ….’

The admission came after she thanked fans for their support after revealing her post-baby body 11 days after giving birth.

Following the outpouring of support, she shared an update after welcoming Cree with her footballer husband, 42.

Kate is already a stepmother to Rio’s three children – Lorenz, 14, Tate, 12, and Tia, nine – who he had with his first wife Rebecca Ellison, who passed away from breast cancer in 2015. 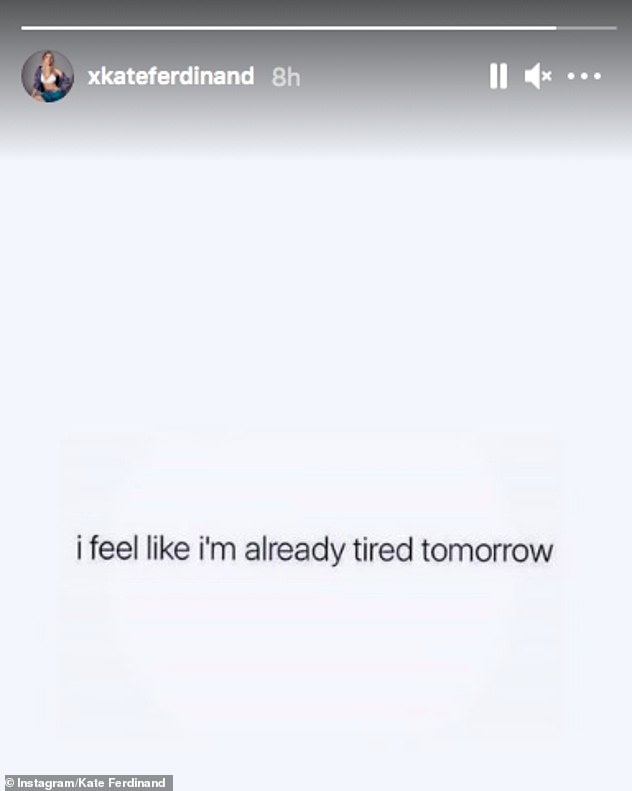 Exhausted: Taking to Instagram last Sunday, Kate candidly revealed she was feeling ‘tired’ after she opened up about her ‘traumatic’ delivery earlier in the week

She took to her Instagram Stories to reveal she was yet to get fully dressed and was living in nightwear since welcoming her first child.

Kate posted a picture of her bed, with their dog Ronnie curled up on one side, who had snuck in after the former Manchester United defender went to work.

She penned: ‘2021 update so far. Showering and fresh PJs are still happening. Haven’t made it into clothes yet hoping at some stage in 2021 I will get dressed… I was overwhelmed by all of your comments on my most recent picture.

‘Sometimes social media can be such a negative place but since sharing this post it has been so positive for me. 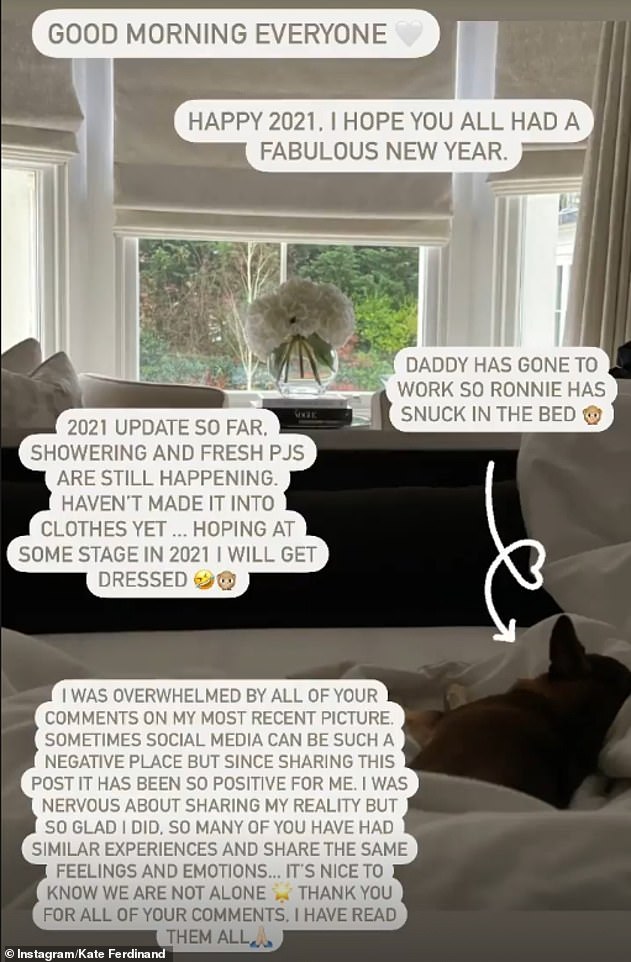 Update: Kate thanked fans for support after revealing her post-baby body 11 days after giving birth and discussing her traumatic delivery for the first time

‘I was nervous about sharing my reality but so glad I did. So many of you have had similar experiences and share the same feelings and emotions…

‘It’s nice to know we are not alone. Thank you for all of your comments. I have read them all.’

At the end of December, Kate posed in a crop-top and high-waisted underwear, revealing a significant bruise on her thigh, as she cradled her beloved newborn.

In an emotional post, Kate said she was left in tears and as she recovered from the birth, which meant she was unable to ‘feed or change’ Cree consistently. 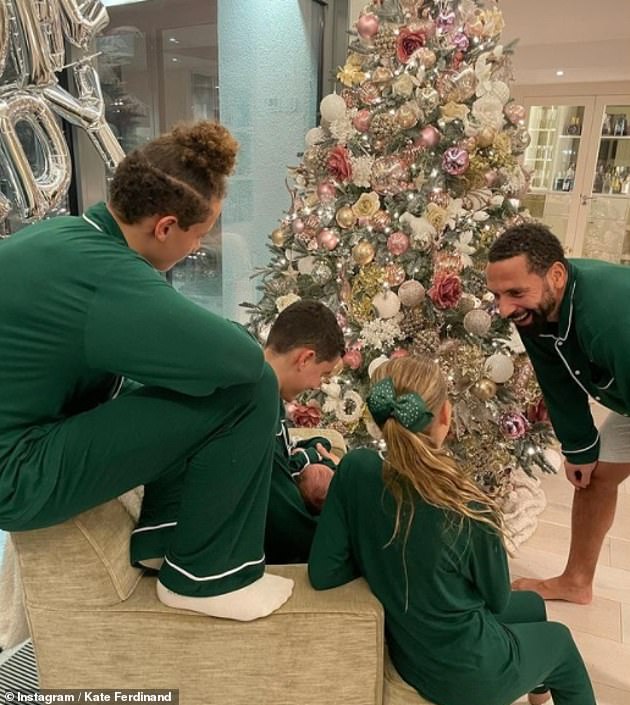 ‘My whole heart’: Kate took to Instagram on Christmas Eve to upload the first image of their newborn, with his older siblings Lorenz, 14, Tate, 12, and Tia, nine, cooing over him

The fitness enthusiast admitted that she had been feeling ‘completely wiped out’ after her son’s ‘traumatic birth’, as he was born by an emergency caesarian.

She wrote: ‘Day 11… What a bubble this is… We are so obsessed with our little angel Cree.

‘I just seem to stare at him for hours on end, seeing the kids and him is literally what dreams are made of, feeling completely overwhelmed.

‘I wanted to share this with you. This is me … and let me add this is a much better version of me than the last 10 days. 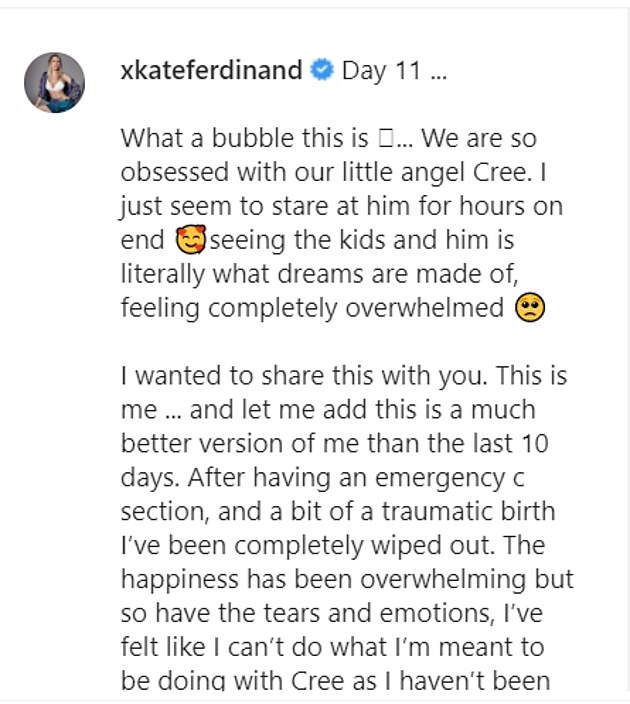 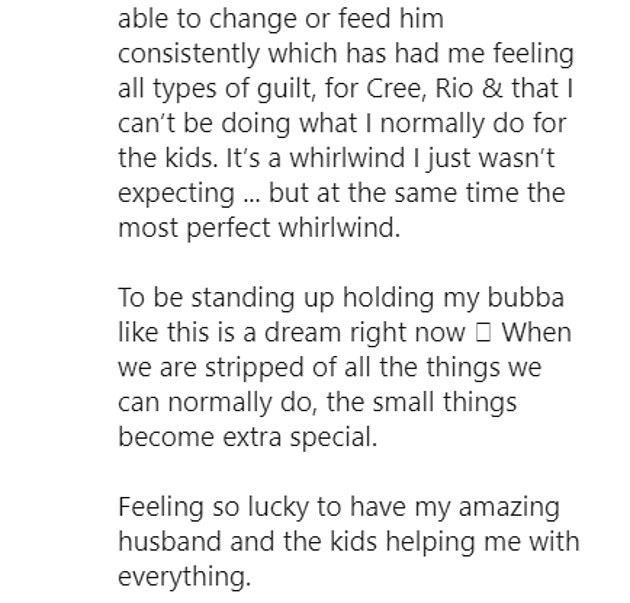 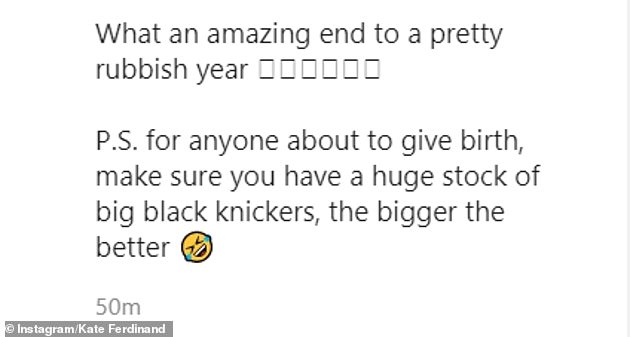 Recovery: In an emotional post, Kate said she had been left in tears and feeling guilty as she recovered from the birth, which meant she was unable to ‘feed or change’ Cree consistently

‘After having an emergency c section, and a bit of a traumatic birth I’ve been completely wiped out.

‘The happiness has been overwhelming but so have the tears and emotions, I’ve felt like I can’t do what I’m meant to be doing with Cree as I haven’t been able to change or feed him consistently which has had me feeling all types of guilt, for Cree, Rio & that I can’t be doing what I normally do for the kids.

‘It’s a whirlwind I just wasn’t expecting … but at the same time the most perfect whirlwind.’

On cloud nine: Kate took to Instagram on Thursday evening to gush ‘our angel boy, we all love you so much’

‘Cree Ferdinand is home and ready for Christmas!’ The former Manchester United defender, 42, posted the identical image to his page, alongside an accompanying note

Kate added that she was progressing in her recovery, writing: ‘To be standing up holding my bubba like this is a dream right now.

‘When we are stripped of all the things we can normally do, the small things become extra special.

‘Feeling so lucky to have my amazing husband and the kids helping me with everything. What an amazing end to a pretty rubbish year.

‘P.S. for anyone about to give birth, make sure you have a huge stock of big black knickers, the bigger the better.’

Kate also took to Instagram on Christmas Eve to upload the first image of their newborn, with his three older siblings cooing over him in matching PJs. 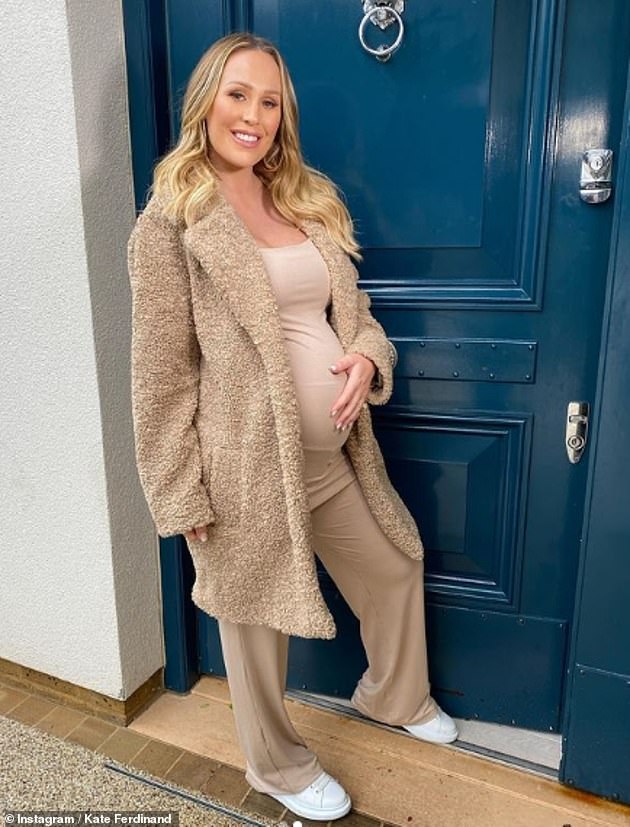 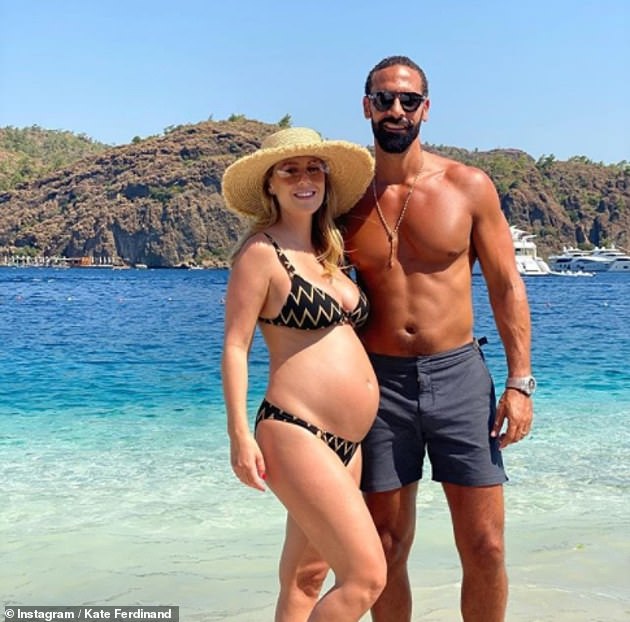 Updates: The blonde has kept fans posted with her baby preparations – and growing baby bump – over the past few months on her Instagram page

In an accompanying caption, the new mother gushed: ‘My whole heart. Cree Ferdinand … our angel boy we all love you so much.’ (sic)

The ex-reality star’s stepchildren appeared in great spirits as they cradled their new brother, while doting father Rio, looked over his brood with delight.

Rio posted the identical image to his page, alongside the note: ‘Cree Ferdinand is home and ready for Christmas! 1 more sleep.’

Kate revealed she was expecting her first child when she shared a sweet video to her Instagram where she sat down the children to tell them the baby news.

She captioned the announcement: ‘The crazy house is about to get a little bit crazier … every time I watch this it makes me cry, the best reaction. Baby Ferdy we are all so excited to meet you.’ 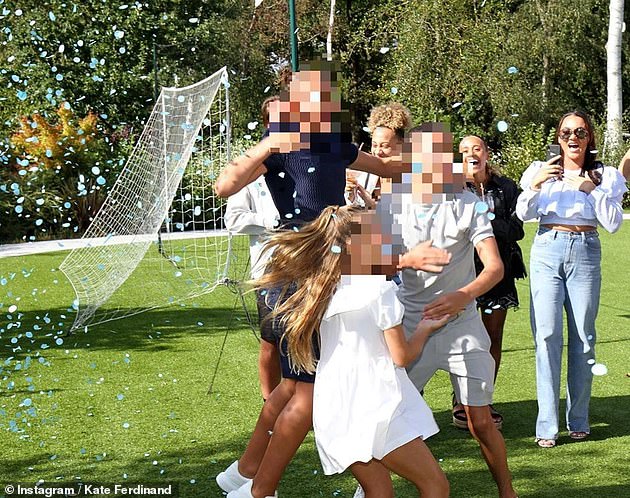 It’s… a boy! The pair later shared a fun collection of videos where their family discovered they were expecting a baby boy during a gender reveal

The media personality has been open about how she has struggled with being a step-mum to Rio’s three children as well as being being pregnant while facing mental health battles.

In September, she candidly discussed battling anxiety and ‘really struggling’ during her first trimester on the Women’s Health Going for Goal podcast.

The model said: ‘Lockdown has been an experience. Obviously I was pregnant and the children didn’t know, and something I’ve struggled with is being pregnant with my first biological child and still being a mum.’

The exercise guru embarked on a relationship with footballer Rio in 2017 and stepped back from TOWIE to become a mother figure for the trio, after his first wife, Rebecca, tragically passed away from breast cancer in 2015. 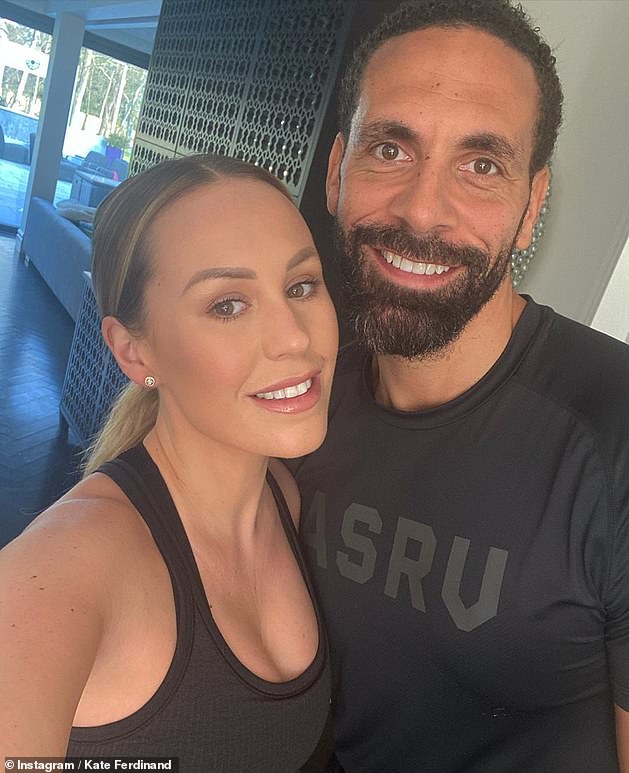 Exclusive! The fitness guru gave her first interview after announcing her pregnancy to MailOnline in June where she said she was ‘tired’ but ‘listening to her body’

Rio then proposed to Kate in November 2018 after almost two years of dating. She accepted his romantic rooftop proposal during a family holiday to Abu Dhabi.

He popped the question in front of his three children after the former footballer was given the blessing of his late wife Rebecca to find love again.

The duo tied the knot less than a year later with a romantic ceremony taking place in September 2019 at the luxurious D Maris Bay hotel in Turkey.

In 2018, Kate revealed that Rio’s three children were keen for her to have a baby so they could have another sibling to play with. 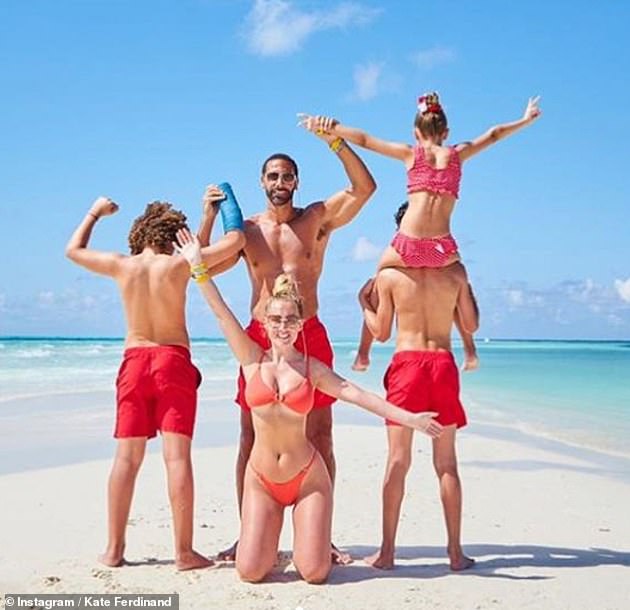 Lovely: Kate stepped back from TOWIE to become a mother figure for the trio, after his first wife, Rebecca, tragically passed away from breast cancer in 2015