Family, friends and teammates of a talented young footballer have been left heartbroken after he lost his battle with depression.

Idriss Elhafiane, who died on January 13, is being remembered as a true gentleman who was a role model and inspiration to many.

The 27-year-old spent more than two decades playing his beloved soccer and was a vice-captain of the Rockdale City Suns in the National Premier League.

Shattered friends of Mr Elhafiane have organised a GoFundMe to raise funds ‘to support his beautiful family with the funeral expenses during this difficult period’.

‘Idriss was an inspiration to all, a role model to many and a friend to everyone that met him,’ Emilio Khatis, who is organising the fundraiser, said. 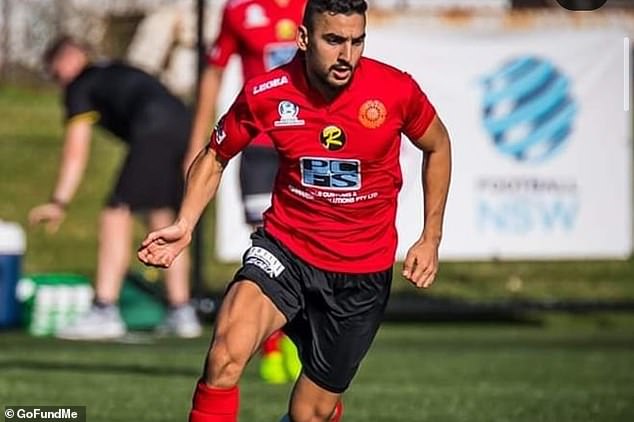 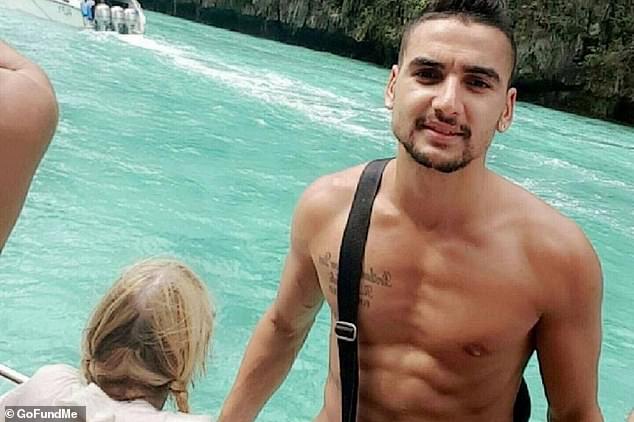 Mr Elhafiane (pictured) was a gentleman, a professional, an inspiration and a favourite in the stands, his football club, the Rockdale City Suns, said

‘His massive heart was a reflection of the loving family environment he was born and raised in.’

Mr Khatis said Mr Elhafiane was a ‘gentlemen unlike any other’ and spread love, peace and happiness on a daily basis.

‘(He was) the most kind-hearted, passionate, loving, supportive person that God had given to sprinkle positive energy, high frequencies and good vibrations,’ he said.

‘He was on the front line as the king and captain since the day he was born.

‘His captain and leadership qualities were seen for over 20 years on the football field.’

Mr Khatis urged those who are unable to donate financially to ‘take the time to talk to your loved ones, friends and workmates surrounding mental health’.

More than $56,000 has so far been raised through the GoFundMe page. 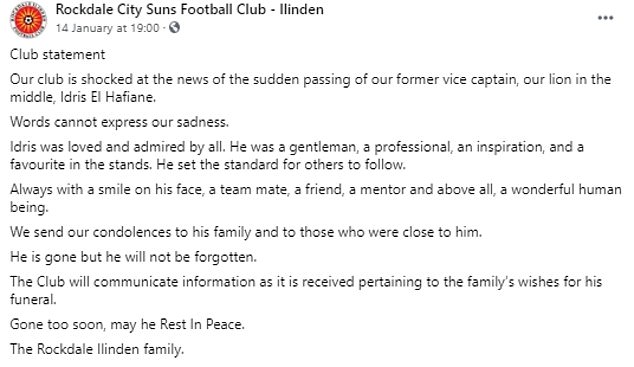 The Rockdale City Suns took to Facebook to pay tribute to Mr Elhafiane, saying he was loved and admired by all

Football NSW also dedicated a Facebook post to Mr Elhafiane, where they said he was ‘a gentleman on and off the pitch’ 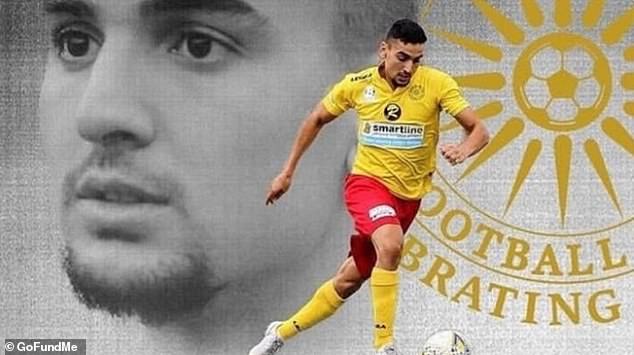 ‘Our club is shocked at the news of the sudden passing of our former vice captain, our lion in the middle, Idriss Elhafiane,’ the club wrote.

Idriss was an inspiration to all, a role model to many and a friend to everyone that met him

The club said Mr Elhafiane always had a smile on his face and as well as being a teammate, friend and mentor, above all he was a wonderful human being.

‘He was a gentleman, a professional, an inspiration and a favourite in the stands,’ the club said.

‘We send our condolences to his family and to those who were close to him. He is gone but he will not be forgotten.’

Football NSW also paid tribute to Mr Elhafiane and said they were ‘deeply saddened to hear the news of the tragic passing of one of our game’s most liked and admired footballers’. 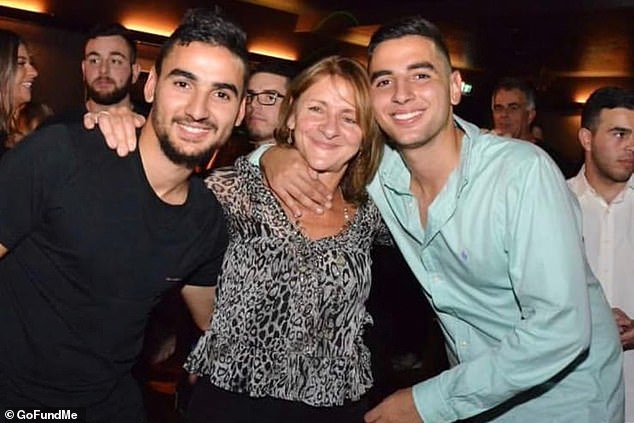 Mr Elhafiane’s ‘massive heart was a reflection of the loving family environment he was born and raised in’ (pictured, left, with family)

‘Gone too soon, Football NSW would like to pass on its deepest condolences to the Elhafiane family, may he rest in heavenly peace.’

Friends took to Facebook to express their shock at Idriss’ passing.

‘RIP to this beautiful soul. You were one of a kind Idriss and will never forget that smile of yours and all the fun times we had,’ one person wrote.

Another said: ‘Idriss was always the life of the party and so much fun to be around’.

‘Rest in peace Idriss, you will be sorely missed as you were such a beautiful person. One of the very best players I have seen in the NPL and you were truly loved by all the Rockdale supporters I know,’ one tribute read.

‘Always wore a smile that was infectious. A great player with a heart of gold,’ one person posted.

RESOURCES: if you are feeling anxious and depressed

– Talk to your doctor

– BeyondBlue runs a daily webchat from 1pm to 12am

– Seeking a support group can also help: you are not alone and they can help you to discuss your situation in a safe space

The Pentagon wants to take a harder line on domestic extremism. How far can it go? (Missy Ryan/Washington Post)