As this winter’s polar vortex currently sends extreme icy blasts of Arctic weather to some parts of the northern hemisphere such as the northeast of the US, scientists are using wind information from ESA’s Aeolus satellite to shed more light on this complex phenomenon.

The polar vortex is a huge mass of frigid air high above the North Pole in the polar stratosphere. It is surrounded by a strong jet of air swirling counter-clockwise along the vortex’s boundary. The vortex tends to be much stronger in the winter, keeping bitter cold air locked in around the Arctic.

However, sometimes the vortex can weaken, become distorted or even split into two and meander further south, affecting the weather and jetstream further down in the troposphere, potentially bringing unusually cold weather and snow to lower latitudes.

Such dramatic events cause the strong wind around the edge of the polar vortex to weaken or reverse, leading the temperature of the polar stratosphere to rise rapidly by tens of degrees Celsius.

Since these events can trigger extreme weather in Europe and North America, they are of scientific and practical interest. However, the processes involved are not fully understood, and until recently there have been major technical challenges in measuring wind from space, which is needed to measure and monitor such a large-scale event.

Fortunately, scientists now have ESA’s Aeolus satellite at hand to help understand more about why and how the polar vortex is pushed off balance.

Aeolus is the first satellite in orbit to profile directly Earth’s winds from space.

It works by emitting short, powerful pulses of ultraviolet light from a laser and measures the Doppler shift from the very small amount of light that is scattered back to the instrument from molecules and particles to deliver profiles of the horizontal speed of the world’s winds mostly in the east-west direction in the lowermost 26 km of the atmosphere.

Corwin Wright, Royal Society research fellow at the University of Bath in the UK, said, “Changes in the wind structure in a sudden stratospheric warming event have never been observed directly at a global scale before. So far, our understanding of these changes has been developed using point measurements, measurements along localised aircraft flight tracks, through the use of temperature observations, and, primarily, computer models and assimilative analyses.

“However, we can now exploit novel measurements from Aeolus, the first satellite capable of observing winds directly in the upper troposphere and lower stratosphere, to study this process observationally during this current major event.”

Anne Grete Straume, ESA’s Aeolus mission scientist, commented, “We are currently observing a polar vortex event where we see it split into two, with one spinning mass of air over the North Atlantic and one over the North Pacific.

“The split leads to changes in the tropospheric circulation allowing cold air masses from the poles to more easily escape down to lower latitudes. At the moment, parts of North America seem to be experiencing colder weather than Europe, although we have seen events of cold air reaching quite far south in Europe over the past few weeks causing, for example, heavy snowfall in Spain.

“What scientists would also like to understand is whether sudden stratospheric warming events might become more frequent owing to climate change. Also for this, Aeolus wind data will be very important to better understand the mechanisms triggering these weather events.

“It is early days yet to draw any scientific conclusions from our Aeolus data, but work is certainly underway to shed new light on why this seasonal phenomenon can sometimes be extreme – watch this space.” 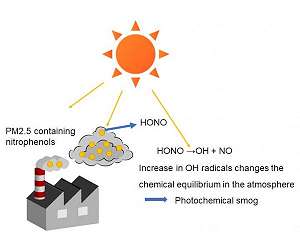 An advanced laser technique has allowed researchers to observe, in real-time, the decomposition of a pollutant into atmospheric nitrous acid, which plays a key role in the formation of ozone and photochemical smog. The technique, described by Hokkaido University researchers in The Journal of Physical Chemistry Letters, could be used in a wide rang … read more

Spacey To Star In “Man Who Drew God”