Celebrated annually on 2 February, World Wetlands Day aims to raise global awareness about the importance of wetlands for our planet. This year’s theme shines a light on wetlands as a source of freshwater and encourages actions to restore them. From their vantage point of 800 km high, Earth-observing satellites provide data and imagery on wetlands that can be used to monitor and manage these precious resources sustainably.

Natural wetlands are some of the most diverse and productive ecosystems and are critical for human survival. They provide many important benefits for humanity, ranging from freshwater supply, providing food and habitat, supporting biodiversity, to flood control, improving water quality and climate change mitigation.

Yet wetlands face many challenges. According to the Ramsar Convention, 64% of the world’s wetlands have disappeared since the beginning of the last century. Some wetlands have been lost or degraded as a result of pollution, overexploitation of resources and deforestation.

Earth observation is recognised as a reliable and cost-effective technique for analysing and quantifying various aspects of wetland waters. The monitoring of inland water bodies is essential in order to characterise water bodies, identify changes or trends in water quantity and quality, and assess how these changes impact the integrity of wetland ecosystems and the services they provide.

For example, the Ogooue River in Gabon, the fourth largest river in Africa by volume of discharge and catchment, is home to important wetlands. However, the river is largely unmonitored, and the lack of observations poses a significant challenge to management efforts.

Earth observation can help bridge this gap, providing highly valuable observations to monitor the changes in river flows and their incidence on the water regimes of downstream wetlands.

ESA’s GlobWetland Africa project has demonstrated how data from both ESA’s CryoSat mission and from the Synthetic Aperture Radar Altimeter (SIRAL) instrument onboard the Copernicus Sentinel-3 mission can be assimilated in hydrological simulation models to assess the river’s water balance and analyse changes in the inflow hydrographs to selected wetlands in response to land use changes, hydropower and climate change.

Hydrographs show the rate of flow, or discharge, over time. These models are key in understanding catchment dynamics and are an essential tool to systematically evaluate the interactions between water availability, water use sectors and future climate.

In Uganda, wetlands and other water bodies cover roughly 10% of the country’s surface, and is home to Africa’s largest lake, Lake Victoria. However, many wetlands are put under pressure from drainage and are reclaimed to provide land for local communities to increase agriculture production for the rapidly growing population.

In order to map the dynamics of the water bodies and wetlands, ESA’s GlobWetland Africa project team used four years of data from the Copernicus Sentinel-1 and Sentinel-2 missions merged together in a hybrid approach to map the extent and frequencies of water and moist soils, and used as input for preparing national wetland inventories.

The images below show wetlands along the shore of Lake Victoria and Lake Wamala. Wetlands form along narrow water streams, where the groundwater level is high, and regular floods occur. The maps show that some of the wetlands have a strong seasonal component, whereas others are moist throughout the year.

Under ESA’s Earth Observation for Sustainable Development (EO4SD) initiative, data from the Copernicus Sentinel-3 mission was used to analyse water quality in Lake Titicaca – the second largest lake in South America and a designated Ramsar site. The unique and fragile ecosystem is negatively impacted by environmental degradation, caused by natural and anthropogenic causes, including sediment runoff and soil sanitisation, untreated urban and mining effluents and unstainable agriculture, fishing and aquaculture practices.

Sentinel-3 has been used to monitor the variation of suspended matter and chlorophyll concentrations in the lake thereby helping to detect trends and hot spots over time, information which is required to make timely decisions to emerging water quality problems, such as the identification of sediment plumes, harmful algae blooms and red tides.

Christian Tottrup, DHI GRAS and project leader of EO4SD on water resource management, commented, “Earth observation is a cost-effective technology for identifying the specific time, place and concentration of pollution – information which is of utmost importance to monitor large investment projects on sanitation infrastructure around the lake.”

The contribution of Earth observation was also valued on the ground. Rene Quispe Chambi, a specialist in water resource management from the National Water Authority (Autoridad Nacional de Agua or ANA) in Peru, said, “It is our objective to integrate Earth observation data into our water monitoring systems as decision makers require this type of information.”

ESA’s Marc Paganini added, “The European Copernicus programme and its Sentinels offer unprecedented opportunities for the Ramsar Contracting Parties to conduct the necessary wetland inventory, monitoring and assessment that ensure the wise use and conservation of their wetlands, which is the primary aim of the Ramsar Convention.

“The open and free data policy of the Sentinels along with their global coverage and the assurance of long-term continuity of observations, are important incentives for wetland practitioners to routinely integrate Earth observation in their work.”

Observing the Earth at ESA 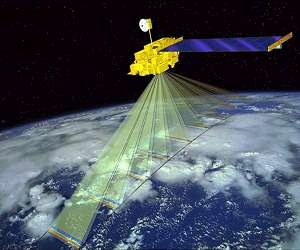 Burning fossil fuels has long powered world economies while contributing to air pollution and the buildup of greenhouse gases. A new analysis of nearly two decades of satellite data shows that economic development, fossil-fuel combustion and air quality are closely linked on the continental and national scales, but can be decoupled at the national level, according to Penn State scientists.

“We know air pollution and economic development are linked, but we want to know how tightly and whether our a … read more

White House, other top officials to get early vaccine access