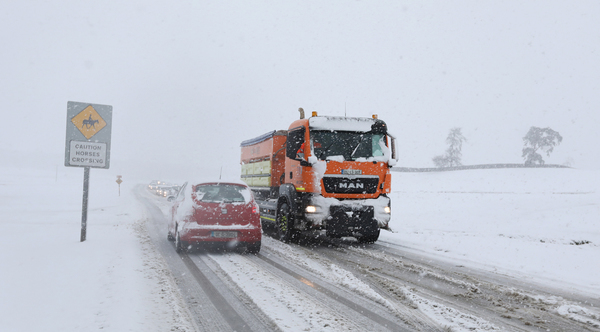 A NATIONWIDE WEATHER advisory notice remains in place this morning as parts of the country face snow showers later today.

The warning kicked in at 6am yesterday and is valid until 6pm on Wednesday, with very cold temperatures, sharp, severe frosts and sleet and snow in eastern counties expected while the notice is in place.

Met Éireann has warned that snow-ice and low temperature warnings are likely in the coming days, with Status Yellow warnings for Antrim, Down, Armagh and Tyrone already issued by the UK Met Office.

Parts of the UK and central Europe have already experienced heavy snowfall over the weekend, but those hoping for (or dreading) similar conditions here will have to wait a few more days to find out if Ireland will be blanketed or if warmer weather is on the way.

Unlike conditions on the continent, Ireland’s cold front originates from Scandinavia, which will bring gusty winds with a significant wind-chill factor today.

The more easterly cold snap in Europe is being driven by winds which Dutch meteorologists have named Storm Darcy, which is packing winds of up to 90km an hour. The storm is not expected to reach Ireland.

Nevertheless, daytime temperatures over the next few days are expected to be in the low single figures and the risk of icy roads and footpaths is expected to increase.

Some snowy showers are expected later today and during Tuesday, but will initially be restricted to eastern parts of Leinster and Ulster before arriving further inland tomorrow.

Met Éireann has said that there is still “a high degree of uncertainty” about the forecast from Wednesday onwards, but it appears now as if milder air from the Atlantic will displace the cold air over Ireland from midweek.

However, the forecaster has warned that if that mild frontal system becomes less energetic and more slow-moving as it nears Ireland, some parts of the country could see more significant and lasting snowfall later this week.

Today will be cold and breezy, with highest temperatures of just 1 to 4 degrees, dropping to lows of -3 to +1 with icy stretches tonight.

Conditions will be similar tomorrow, with bright sunny spells on another cold and breezy day, with afternoon temperatures of just 1 to 3 degrees Celsius, and a very cold night on Tuesday with lows of -4 to 0 degrees.

Most of England and Scotland are already covered by snow and ice warnings amid the ongoing cold snap across the Irish Sea.

Many parts of the UK face another day of temperatures at or around freezing point, as bitterly cold conditions continue due to the strong easterly winds stemming from Ukraine and the Black Sea.

But the cold weather is not expected to be as widespread as the Beast From The East in 2018.

Forecasters in the UK are warning of a strong chance of roads becoming blocked by deep snow, with snow accumulations of 5-10 centimetres in affected areas, reaching up to 30cm at “a few sites”.

The BBC said the UK was “starting to see the whites of the eyes” of Storm Darcy. 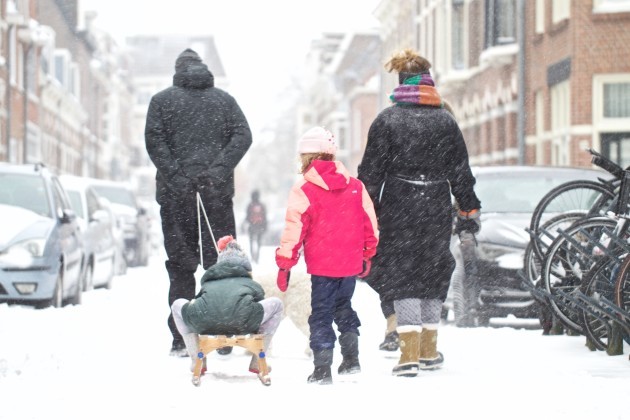 People enjoy the snow in Haarlem, the Netherlands

The Netherlands and parts of Germany were blanketed by snow following the arrival of Darcy yesterday, which disrupted planes and trains and put some Covid-19 testing on hold.

No news is bad news


People sledded and played in the snow in Dutch and German cities despite the bitterly cold conditions where temperatures dropped as low as minus 5 degrees Celsius.

Dutch authorities declared a rare “code red” emergency for the entire country as it was hit by its first proper snowstorm in more than a decade. The last snowstorm took place in January 2010.

Dozens of flights were delayed or cancelled at Amsterdam’s Schiphol airport while Eindhoven airport in the south of the country scrapped all services. All trains were cancelled in the Netherlands, including international services to Germany.

Hopes of a 200km ice-skating marathon through 11 cities called the Elfstedentocht, which would have been held for the first time since 1997, were dashed due to Covid-19 restrictions.

In Germany, snowfall caused major disruption to trains and cancellations of services between cities including Hamburg and Hanover.

Thick snow of up to 30cm disrupted road traffic, with hundreds of accidents and part of a motorway in North Rhine-Westphalia closed by police after it turned into an ice rink.

Belgium received a light dusting of snow but was expecting a big temperature drop as the week progresses.