Josh Frydenberg held a series of talks with Google boss Sundar Pichai and Facebook CEO Mark Zuckerberg over the weekend to discuss a new law forcing them to pay for news.

The treasurer revealed the companies, which have backed down from threats to leave Australia, are keen to make deals after he told them the new law will pass.

‘We have held the line,’ he told reporters on Wednesday. 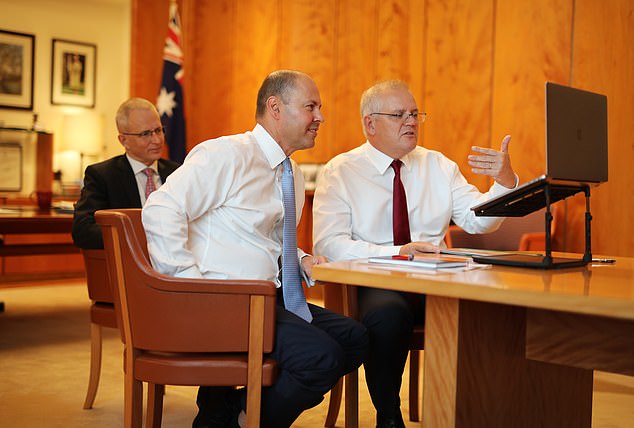 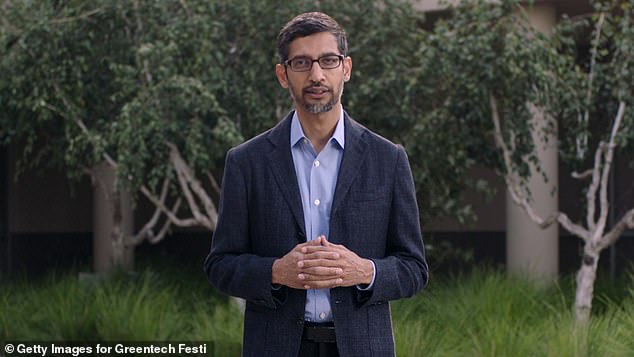 ‘I was heavily involved in discussions both with Sundar at Google and with Mark Zuckerberg at Facebook and in close contact through the weekend with the Prime Minister and Minister Fletcher,’ the treasurer said.

‘What became clear to me in those discussions with Google and with Facebook is that they do want to enter into these commercial arrangements.

‘That is their preference. The preference is to see these commercial arrangements in place and that is why I back the speed of these negotiations has picked up.

‘Let’s wait and see where these negotiations go. Everything is pointing in the right direction.’

In the past few days Google has signed major deals with Nine and Seven West Media – both reported to be worth $30 million a year – for their content to feature on Google’s News Showcase project.

Google is also reported to be on the cusp of agreements with the ABC, Guardian Australia and is also negotiating with News Corp and Daily Mail Australia. 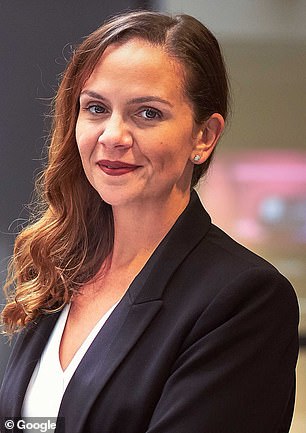 SevenWest chairman Kerry Stokes said it was a ‘great outcome’ and hailed the government’s work on its news media bargaining code as ‘instrumental in the outcome of this ground-breaking agreement’.

A Google spokesman said the company was in discussions with publishers both ‘large and small’ while a Facebook spokesperson said the firm had been negotiating to ‘land commercial deals that reflect the commercial value of news content on our platform’.

It comes as the government’s proposed law to force Google and Facebook to pay for news looks set to sail through Parliament after Labor declared it will support the bill.

Mr Frydenberg made some technical amendments before the bill was read in the House for a second time on Wednesday. It could then pass the Senate within days.

Google previously claimed the law – known as the News Media Bargaining Code – would ‘break the way search works’ and would mean the company has ‘no choice’ but to leave Australia.

‘The idea Australian regulation could break the internet is such a perverse, outlandish threat, yet Google was blasting it across all its platforms that this just might happen,’ said executive director Chris Cooper.

The government’s world-first code states that if a fee negotiation breaks down then an independent umpire will step in and decide the amount based on a ‘final offer’ method, which chooses one side’s position as the resolution.

Australia’s battle with Big Tech is being keenly watched by governments across the world, not least in London, Washington DC and Brussels, where concerns have been raised over the ‘advertising duopoly’ of Google and Facebook.

Australian regulators found that for every $100 spent on digital advertising, $53 goes to Google, $28 to Facebook and only $19 goes to others. 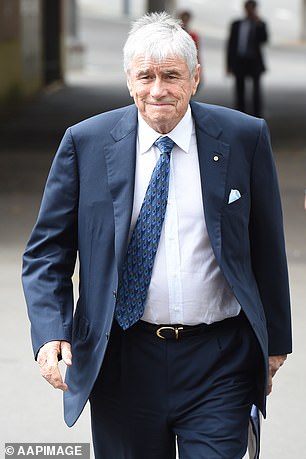 Mr Frydenberg and Communications Minister Paul Fletcher drew up the law after a three-year inquiry by Australia’s competition regulator, the ACCC.

The inquiry found Google and Facebook have ‘an imbalance in bargaining power’ when dealing with news companies.

‘They want deals where they’re in full control of the deal. That’s not a commercial deal in my view,’ he said.

‘They are going to say things to stop the code coming into force. I think that’s what you’d expect them to say. What they’ll actually do, I honestly don’t know.’

He rejected Google’s claims that the code will ruin the company’s search function.

‘I do not accept the argument that the code will break search or destroy a ”free and open Internet” any more than paid search ads destroyed search,’ he said.

The Code will initially apply to Facebook NewsFeed and Google Search – but other services such as Instagram and YouTube can be added if a bargaining power imbalance arises.

The tech giants would face $10million fines if they don’t follow the rules.

In addition to payment for content, the measures would also force transparency around the closely guarded algorithms that tech firms use to rank content.

The code will require Google and Facebook to give publishers notice of any algorithm changes that are likely to have a significant impact on their traffic.

Under a two-way value model, the payment for content would take into account the value that Google and Facebook provide to news organisations by driving traffic to their sites.

What is the bargaining code and why is it needed?

WHY IS IT NEEDED?

Google and Facebook derive a benefit from the ability to make Australian news content available to their users.

Australian news businesses have had to accept commercial deals with the platforms that are less favourable than they would otherwise agree to.

Intervention is needed to address this imbalance because of the public benefit of news and the importance of a strong independent media in a well-functioning democracy.

WHAT IS THE CODE?

The government wants good faith commercial deals to be struck outside the code.

But if the platforms and news organisations are unable or unwilling to reach an agreement ‘final offer arbitration’ will take place.

The arbiters will take into account the benefits traditional news media businesses get by having eyeballs on their product.

The digital platforms will also need to adhere to a series of minimum standards.

Glenn Maxwell: Conquering the demons inside