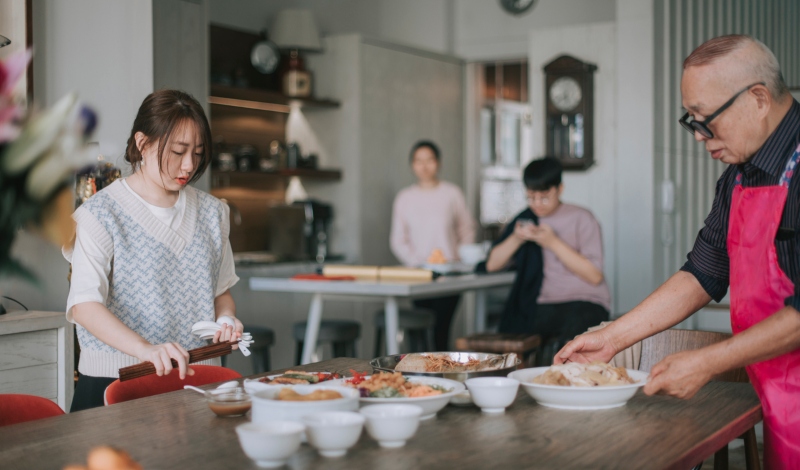 This story comes to us from our partners at Feet in 2 Worlds, a project that brings the work of immigrant journalists to digital news sites and public radio.

One spring day in 2020, Sarah Vasquez lifted the lid of a boiling pot of atole in her kitchen in Marfa, Texas. “The familiar smell of the cinnamon sticks and milk hit me, and I started crying,” she remembers.

Because of COVID-19, Vasquez was doing her best to isolate. As a freelance journalist and photographer, she lost some of her regular gigs and was reassessing her income for the rest of the year. She began making comforting, budget-friendly meals such as arroz con pollo and hamburger meat with corn. For the first time, she put together the ingredients for her grandmother’s atole—a hot corn- and masa-based drink. It brought her to tears, “because I didn’t know when I’d see my family again,” she says.

Vasquez vividly remembers the sweet taste of her grandmother’s atole from the days of her childhood in Austin, Texas. But it wasn’t until the COVID-19 pandemic that she tried making it herself.

“I’m a terrible cook,” says Vasquez. Growing up, she often spent time with her grandmother, Mary Luna Vasquez, at her yellow, one-story house in East Austin, a historically Black and Latino neighborhood that has gentrified in recent decades.

“She’s a very old-school Latina grandma,” says Vasquez. “She doesn’t use measurements at all. She uses a handful of this or that.”

For the past seven years, Vasquez has lived in Marfa, a desert community that’s a six-hour drive from her hometown. Since the start of the pandemic, she hasn’t gone home because she doesn’t want to put her family at risk.

Latino communities have been affected disproportionately by the virus. In Texas, Latinos make up almost 40% of the population but account for 53% of the state’s COVID-19-related deaths, according to CDC data from December 2020.

During a challenging pandemic, comfort food has helped many of us sustain ourselves, whether it’s nutritional or emotional support we seek. For the children and grandchildren of immigrants, reconnecting with ancestral practices have helped us survive and stay connected to family when we can’t be together physically.

“Engaging in traditions and practices of one’s cultural heritage can be a psychologically meaningful experience that can engender feelings of connection,” says Sumie Okazaki, a professor of applied psychology at New York University.

At a time when feelings of isolation are particularly potent, Okazaki says, “seeking out new ways or new rituals to feel connected can certainly promote well-being.”

But it’s not just children of immigrants who are seeking ritual. Immigrant parents, too, are rediscovering traditions they haven’t experienced in years.

Kaori Tashiro, a social worker in Louisville, Kentucky, came to the U.S. 25 years ago. Her two children, now grown, visited their grandparents in Japan every summer of their lives—until now.

Tashiro especially misses riding on public transit in Tokyo. “There’s a certain ringtone you hear in stations,” she says. Last year, the family started listening to YouTube recordings of metro announcement because they couldn’t visit Japan.

Recently, Kaori bought a jar of Japanese pickled plums—the first time she’d sought them out in a store in years. “The fact that you can’t go home makes you want to do things like this,” Kaori says. “I think it’s great. It’s hard for second-generation immigrants to hold on to both identities.” Last summer, Tashiro’s 28-year-old son, Kojin, picked up the habit of making umeboshi, pickled fruit, himself.

But not all immigrant families have been able to hunker down together like the Tashiros.

For Rochelle Kwan, a community organizer in New York City, living far from her San Francisco-based parents, who immigrated from Hong Kong in the late ’70s and early ’80s, the pandemic has been especially difficult.

When New York was surging with its first wave of COVID-19 cases, Kwan kept in touch with her family via Zoom and Google Hangouts.

“I got really burnt out from seeing people on the screen. But I still wanted to stay connected in some way,” Kwan says.

So she started lighting incense and speaking to her ancestors. Before the pandemic, Kwan says she observed this ritual only when she felt like she needed guidance in an urgent situation. Now, she realizes, “This isn’t just something that needs to be done in an emergency.”

Kwan has made it a regular practice: light three sticks of incense, take three bows, and start chatting. “I talk to my grandparents who have passed. At the beginning of the pandemic, when there was a lot of death around me, … it was overwhelming. Being in this tradition allowed me to talk with folks who have passed but have not left.”

The incense ritual coincided with Kwan’s move from Brooklyn to Manhattan’s Chinatown in 2020.

When reports of the virus emerged early last year, NYC’s Chinatown was one of the first neighborhoods to lose customers, as racist fearmongering caused a severe drop in tourism. More recently, organizers in Chinatown have built mutual aid networks and drummed up support for local businesses.

In her new apartment, Kwan began collecting and curating Chinese and Taiwanese records—from Cantonese opera to traditional Chinese instrumental music to Mandopop—and hosting listening parties on Zoom for community members in her neighborhood. Her family tuned in from across the country.

“I have this dream of a Chinatown block party where I’ll be spinning all these records,” Kwan says. She hopes to invite “the old Chinatown folks who know these songs and artists.”

Even before the coronavirus forced folks to quarantine, people from immigrant backgrounds were finding virtual ways to connect with their heritage.

“It is, indeed, possible to learn and connect to your ancestral culture from afar using foods and cultural celebrations,” says Dr. Gail M. Ferguson, an associate professor at Institute of Child Development, University of Minnesota, who studies how people learn about their cultural heritage from a distance. “These efforts do have psychological and emotional benefits that could be especially helpful during this pandemic, when our usual sources of connection and support are diminished.”

Sarah Naser left Palestine when she was just a baby. Growing up in Dearborn, Michigan, with a Palestinian father and White American mother, she knew a few phrases of Arabic. But life under lockdown has afforded her the time to pursue the language in more depth.

Naser, 24, invited two childhood friends—Ali Aoun and Amira Alshouli—to join her for a Friendsgiving in November. They cooked dishes like mashed potatoes alongside hashweh: an aromatic rice loaded with spices, raisins, and nuts.

She no longer lives in Dearborn, an Arab American enclave famous for its food, where local businesses are now struggling to weather the pandemic. But Naser says that learning Arabic has helped her feel more connected to her roots and history.

“Growing up half-White, I always felt alienated from these traditions,” Naser says. “But I feel like learning this stuff helps me feel connected and like I belong to the community.”

So far, 2021 has brought us little respite from adversity. In the U.S., we continue to face the threat of White supremacist violence, and variants of the coronavirus are spreading rapidly across our communities. Connecting to ancestral roots may not seem like a direct response to those threats, but as Ferguson of the University of Minnesota says, these practices can help foster a sense of continuity by connecting us to the past and guiding us to a better future.

If you believe in the work we are doing here at The Good Men Project and want a deeper connection with our community, please join us as a Premium Member today.

Premium Members get to view The Good Men Project with NO ADS. Need more info? A complete list of benefits is here.

How much is an Olympic silver medal worth?