Snyder was found dead in his apartment in Queens, New York, on Monday by his father David Snyder who went to check on him after no one had heard from him for a few days.

David, a psychiatrist, shared the news of his son’s death in a Facebook post Thursday where he said he had battled mental health issues for many years.

The heartbroken father said Snyder’s date of death is yet to be confirmed but that he believes he died before he would have seen his work win at the Golden Globes. 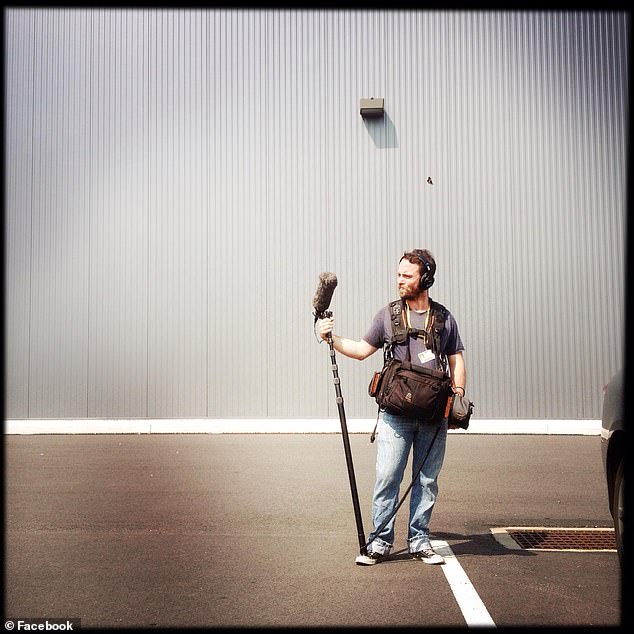 ‘Michael took his own life sometime in the last week and wasn’t discovered until I went to check on him Monday after he had dropped out of contact for several days,’ David wrote in a March 4 Facebook post, shared by Snyder’s aunt Cathy Snyder.

‘He has suffered from major depression for many years.’

David addressed questions about whether the stresses of the coronavirus pandemic and the isolation brought about by lockdowns had played a part in son’s death.

‘People have asked if his death was Covid related. I think we can assume that it played a role in the form of increased isolation and loneliness, but it was certainly more than that,’ he said.

He said his son’s Major Depression is a ‘severe’ that affects at least 15 percent of people at some time in their lives.

However, Snyder had appeared to be ‘doing well’ and was ‘especially joyful and invigorated in these last few months since he was able to return to work on several different film projects’.

The father told of how much his son ‘loved’ his work describing it as the ‘brightest spot in his life’ and how he was ‘thrilled’ to have worked on the award-winning Nomadland. 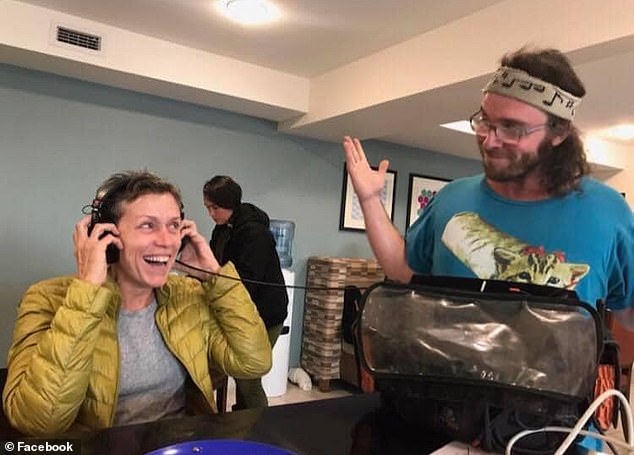 Snyder (pictured with Nomadland star Frances McDermond) was found dead in his apartment in Queens, New York, on Monday by his father David Snyder 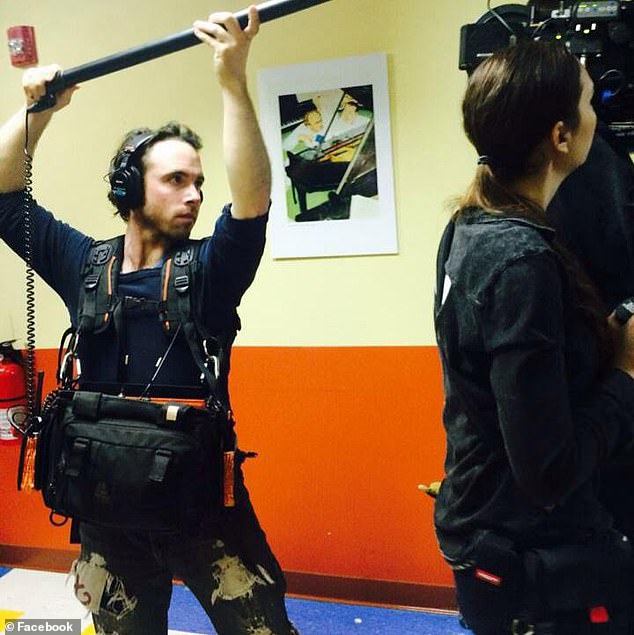 David, a psychiatrist, shared the news of his son’s death in a Facebook post Thursday where he said he had battled mental health issues for many years

‘He was certainly thrilled about all of the accolades for Nomadland and told us many happy stories about his work on the film and the amazing people he got to spend time with,’ he said.

‘Unfortunately, we believe he was gone before getting to see the Golden Globe awards.’

He added: ‘We will never know what changed in the last month or two, but even his love for his family, as well as his love of film and his movie family, was not enough to conquer his demons.’

David said while he had not been able to save his son, he wanted to speak out in the hope it may help others seek the help they need.

‘I am a psychiatrist who was not able to save his own son, partly because he would not share the depth of his pain,’ he said.

‘But I know that most people with this condition will recover with the proper help and support.

‘I hope that the shocking nature of Michael’s death will alert others to speak up, risk being vulnerable, and seek the help that they need. It is such a tragic waste that a temporary heightening of despair can end a life with so much promise.’ 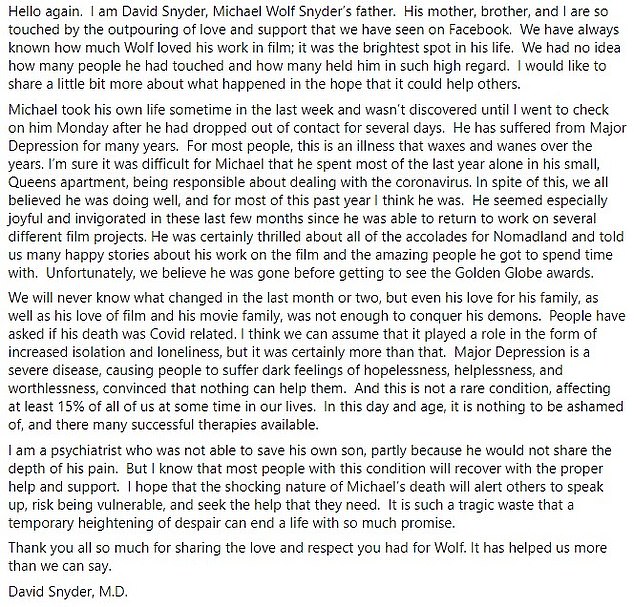 Snyder worked as the production sound mixer on Nomadland, the film starring Frances McDormand as a homeless woman travelling through the American West.

Tributes poured in from Snyder’s co-workers on the film.

McDormand said in a statement shared by Variety: ‘Wolf recorded our heart beats. Our every breath. For me, he is ‘Nomadland.”

Zhao, who also worked with Snyder on 2017’s contemporary western film The Rider, said she would ‘always miss him’ and quoted Nomadland’s phrase ‘see you down the road.’

‘On ‘The Rider’ and ‘Nomadland,’ I always looked at Wolf after each take. I didn’t wear headphones on set and so I heavily relied on Wolf to be my ears. He would nod at me with a happy grin, or tears in his eyes, or sometimes he would discreetly signal ‘one more,” she said in a statement. 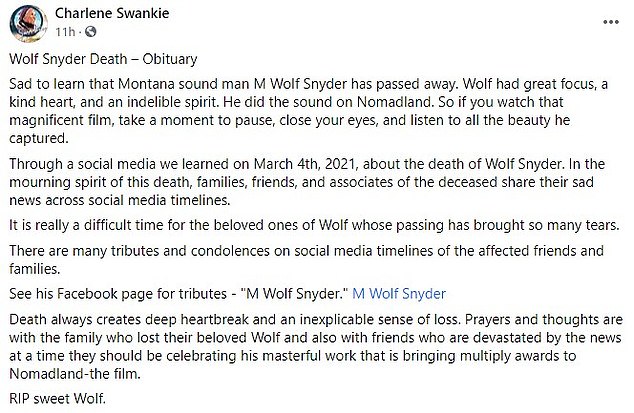 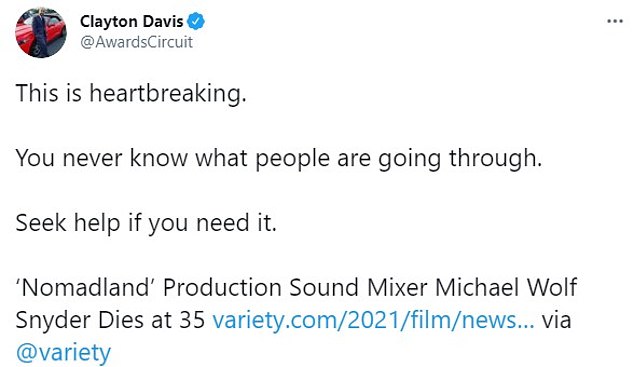 ‘During ‘The Rider,’ Wolf suggested an idea we later took onto ‘Nomadland’ — recording room tones longer than we need as a chance to experience silence.

‘After hustling on each location, we sat together, in silence, tuned in, listened and honored the world around us and each other. I will always miss him.

‘He would always be with me on set, after each take, and in the silence of every room tone. See you down the road, my friend.’

‘Sad to learn that Montana sound man M Wolf Snyder has passed away. Wolf had great focus, a kind heart, and an indelible spirit,’ she wrote in a Facebook post.

‘He did the sound on Nomadland. So if you watch that magnificent film, take a moment to pause, close your eyes, and listen to all the beauty he captured.’

She added: ‘Death always creates deep heartbreak and an inexplicable sense of loss. Prayers and thoughts are with the family who lost their beloved Wolf and also with friends who are devastated by the news at a time they should be celebrating his masterful work that is bringing multiply awards to Nomadland-the film. RIP sweet Wolf.’ 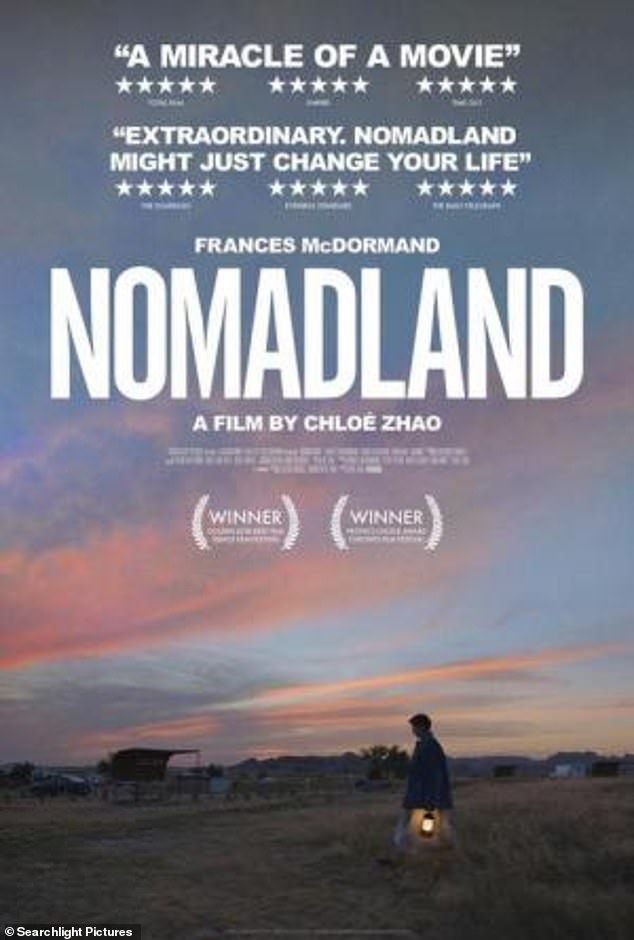 Snyder worked as the production sound mixer on Nomadland, the film starring Frances McDormand as a homeless woman travelling through the American West

A statement released on behalf of the entire cast and crew of Nomadland said his memory will ‘live forever’ in his work.

‘While our hearts break with Wolf’s loss, we hope it is a comfort to know that his spirit will live forever in every laugh he recorded, every breeze, and every gallop of a horse. He was part of our little movie family and his kind soul touched us all,’ the statement read, per Variety.

‘Wolf truly brought life to our film. We send our condolences to his family on behalf of the entire ‘Nomadland’ company. See you down the road, sweet friend.’

Film critic Clayton Davis called his death ‘heartbreaking’ and said ‘you never know what people are going through’ while director Jason Fraley praised Snyder’s ‘under-appreciated talent’ in statements on Twitter.

Snyder started out as a boom operator on the thriller Occupant in 2011 before working in the sound department on 61 movies or TV shows, according to IMDB.

Among his notable work, he worked as an additional sound recorder on the Emmy-nominated TV series Good Omens which also featured McDormand.

Snyder was also announced to work on TV movie Enzo Fast before his death and was the sound mixer on a number of 2021 releases including the short Dissolved Girl.

How to connect a PS5 controller to your PC

Ex-Pearl Jam Drummer Talks What It Was Like Playing With David Bowie, Recalls How Bob Dylan Behaved When He Joined His Band [News]