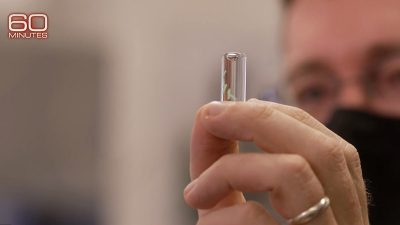 All Global Research articles can be read in 51 languages by activating the “Translate Website” drop down menu on the top banner of our home page (Desktop version).

Its purpose is to track chemical reactions going on inside your body, which may reveal that you’re infected with a virus like COVID-19 or influenza and about to start having symptoms the next day

In addition to the under-skin sensor, the U.S. Defense Advanced Research Projects Agency (DARPA) has been working on a customized filter that can be put on a standard dialysis machine to remove COVID-19 from the blood

Profusa said it intended to seek FDA approval for their tissue-integrating biosensor in 2021, and a DARPA-backed study is also underway to measure early signs of influenza via the biosensor technology

The biosensors may detect disease outbreaks, biological attacks and pandemics up to three weeks earlier than current methods, but you may have to give up your privacy in exchange

In the “60 Minutes” clip here, Bill Whitaker speaks with Dr. Matt Hepburn, a retired Army infectious disease physician, about a tiny sensor that can be embedded under your skin. Its purpose is to track chemical reactions going on inside your body, which may reveal that you’re infected with a virus like COVID-19 or influenza and about to start having symptoms the next day.

Hepburn describes it as a “check engine light,”1 which could have tremendous usefulness, for instance, on an aircraft carrier where thousands of sailors live in close quarters. If the sensor gives the signal that you’re “sick,” even though you have no symptoms, a blood draw could be self-administered, giving you a diagnosis in three to five minutes.

“As you truncate that time, as you diagnose and treat, what you do is you stop the infection in its tracks,” Hepburn said.2 Admittedly, a sensor that’s implanted under your skin has an Orwellian ring to it, which is why Whitaker made the disclaimer, “It’s not some dreaded government microchip to track your every move, but a tissue-like gel engineered to continuously test your blood.”

But in light of the government’s recent intrusions on personal liberties and ability to force quarantines on anyone in the name of public safety, even in the absence of illness, isn’t that essentially the same thing?

To put this into perspective, consider that Hepburn is the vaccine coordinator for Operation Warp Speed (OWS). OWS, a joint operation between U.S. Health and Human Services (HHS) and the Department of Defense (DOD), continues to be shrouded in secrecy but, little by little, information is emerging that long-term monitoring of the U.S. public is part of the plan.

At face value, OWS is a public-private partnership that was tasked with producing therapeutics and a fast-tracked COVID-19 vaccine.3 OWS invested an estimated $18 billion primarily in late-stage clinical development and early manufacturing of COVID-19 vaccines, and agreements to purchase at least 455 million doses were made.4

Rather than just ensuring a vaccine is produced and made available for those who want it, however, Moncef Slaoui, the chief scientific adviser for Operation Warp Speed — he’s been dubbed the coronavirus vaccine czar5 — said in an interview with The Wall Street Journal in October 2020 that the rollout would include “incredibly precise … tracking systems.”6,7

Their purpose? “To ensure that patients each get two doses of the same vaccine and to monitor them for adverse health effects.”8 In an interview with The New York Times, Slaoui described it as a “very active pharmaco vigilance surveillance system.”9

Similar language was reiterated in an October 2020 perspective article published in The New England Journal of Medicine (NEJM), written by Slaoui and Hepburn.10 Writing in NEJM, the duo wrote, “Because some technologies have limited previous data on safety in humans, the long-term safety of these vaccines will be carefully assessed using pharmacovigilance surveillance strategies.”11

In addition to working with OWS, Hepburn is a former program manager for the U.S. Defense Advanced Research Projects Agency (DARPA), where he oversaw the development of the implantable biosensor shown in the “60 Minutes” clip with its maker, Profusa.12 The sensor allows a person’s physiology to be examined at a distance via smartphone connectivity. Profusa is also backed by Google, the largest data mining company in the world.

Is Military Leadership and Total Surveillance the Plan?

OWS, rather than being directed by public health officials, is heavily dominated by military, technology companies and U.S. intelligence agencies, likening it to a successor for Total Information Awareness (TIA), a program managed by DARPA that sprung up after the 9/11 attacks.

At the time, TIA was seeking to collect Americans’ medical records, fingerprints and other biometric data, along with DNA and records relating to personal finances, travel and media consumption.13

Hepburn has praised the DOD’s role in OWS, calling it “transformative.” “One of the most important lessons learned is the value of military leadership,” he said during a speech to the Association of Military Surgeons of the United States’ virtual annual meeting in December 2020.14

In addition to the vaccine contracts the DOD obtained “in record time that was mutually beneficial” for the vaccine manufacturers, Hepburn told members of the health care community “‘to convey a message that these vaccines are safe and efficacious, and that vaccination is important’ as a counterpoint to widespread misinformation in the general public about vaccines …”15

Rather than taking over a public health initiative, as it may first appear, Hepburn said the DOD’s role in the pandemic was a collaboration not only for Americans but for people globally, and it’s set to become the new standard: “[T]his is the new standard for rapid product development, and will apply not only to pandemics but also to develop product for combat health in half the time,” he said.16

Stopping Pandemics Before They Begin?

In addition to the under-skin sensor, DARPA has been working on other projects, including a customized filter that can be put on a standard dialysis machine to remove COVID-19 from the blood.

As blood passes through the machine, the virus is removed, returning only healthy blood back to the body. A critically ill spouse of a military member, known only as “Patient 16,” reportedly received the treatment for four days and made a full recovery.17

Other scientists have recovered human antibodies for the 1918 Spanish flu, which they got from people still alive today who had lived through that pandemic. When they infected animals with the 1918 flu virus — yes, they still have it — the antibodies were effective in stopping it.18

Hepburn and his team have also funded research on a simulated Zika virus outbreak, creating a cure in 78 days, while other Pentagon researchers are in the process of creating a vaccine that would work against all coronaviruses, even the common cold. It’s currently in clinical trials.19

The implant is the size of a grain of rice, and connects to an online database that will keep track of changes in your biochemistry and a wide range of biometrics, such as heart and respiratory rate and much more.

The technology consists of three components:20 the implanted sensor, a reader placed on the surface of the skin and the software that allows the reader to send the collected data via Bluetooth to your phone or tablet, which in turn can be connected to other online sources such as your doctor’s website. As Defense One explained in March 2020:21

“The sensor has two parts. One is a 3mm string of hydrogel, a material whose network of polymer chains is used in some contact lenses and other implants. Inserted under the skin with a syringe, the string includes a specially engineered molecule that sends a fluorescent signal outside of the body when the body begins to fight an infection.

The other part is an electronic component attached to the skin. It sends light through the skin, detects the fluorescent signal and generates another signal that the wearer can send to a doctor, website, etc. It’s like a blood lab on the skin that can pick up the body’s response to illness before the presence of other symptoms, like coughing.”

Profusa said it intended to seek FDA approval for their tissue-integrating biosensor in 2021,22 and a DARPA-backed study is also underway to measure early signs of influenza via the biosensor technology. The injectable sensors will be used to measure physiological statuses to reveal not only indicators of human response to infection but also “exposure to disease in healthy volunteers.”23

A wireless patch that measures tissue oxygen levels would also be used, sending information to a mobile device for real-time data. According to Profusa, the biosensors may detect disease outbreaks, biological attacks and pandemics up to three weeks earlier than current methods.24 It would seem, however, that in order for such sensors to work on a widespread scale, extensive adoption would be required.

24-Hour Monitoring in Exchange for ‘Safety’

There are glaring privacy and ethical concerns when it comes to rolling out an implantable sensor that will track your every sniffle, even before you reach for a tissue. The information will then be sent digitally to your cellphone, and who will have access? Perhaps an even worse prospect is, what information could potentially be sent the other way — from the sensor into your body? For instance, technology critic Adam Keiper pointed out in The New Atlantis:25

“Aside from nanotech’s potential as a weapon of mass destruction, it could also make possible totally novel forms of violence and oppression. Nanotechnology could theoretically be used to make mind-control systems, invisible and mobile eavesdropping devices, or unimaginably horrific tools of torture.”

In order to stop a disease outbreak three weeks early, offering a fearful public an illusion of safety, you’d only have to give up your privacy, and submit to being monitored and hooked up to “the cloud,” perhaps permanently.

If you remember TIA after the 9/11 attacks, you may also remember that it was quickly defunded by Congress after significant public backlash, including concerns that TIA would undermine personal privacy.

In the case of OWS and the emerging biosensors, there’s little negative press, and media outlets are overwhelmingly supportive of the operation as a way to resolve the COVID-19 crisis and future pandemics. One of my favorite independent journalists, Whitney Webb, put it this way:

“It’s certainly alarming, and it seems to point to the fulfillment of an agenda that was attempted to be pushed through or foisted on the American public after 9/11, called Total Information Awareness, which was managed, originally, by DARPA.

A lot of the same initiatives proposed under that original program after 9/11 have essentially been resurrected, with updated technology, under the guise of combating COVID-19.”

25 The New Atlantis, The Nanotechnology Revolution

Featured image is a screenshot from the CBS video