Trinny Woodall and her partner Charles Saatchi shared a tender moment together on Wednesday after heading out to Mayfair for a spot of lunch.

The presenter, 57, was dressed head-to-toe in a chic blue ensemble and she shared an al fresco meal with her partner at their favoured upscale eatery Scott’s.

While sat at their outside table chatting away, Trinny was spotted sipping from a glass and had a cigarette in her hand. 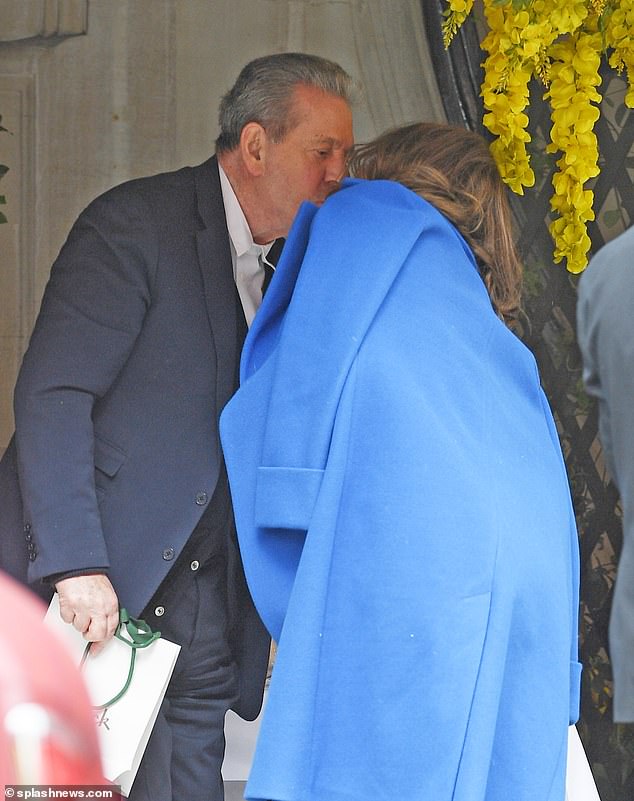 Lunch date: Trinny Woodall, 57, shared a tender kiss with partner Charles Saatchi, 77, after meeting up for lunch at their favourite Mayfair restaurant on Wednesday

Before parting ways, Trinny and her advertising agency partner leaned into each other and shared a tender kiss.

Trinny looked the definition of effortless as she was spotted wearing a blue suit adorned with black buttons.

Over her shoulders, a coat – in a deeper tone of blue – was draped.

She also carried a similarly coloured blue handbag which hung from her shoulder as as she left the restaurant. 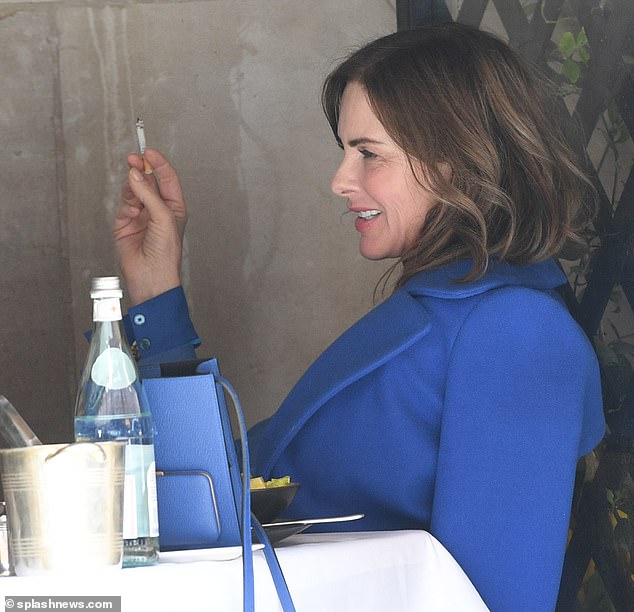 Mid-conversation: With a cigarette in her hand, Trinny was dressed head-to-toe in classy blue clothing as she enjoyed lunch at Scott’s 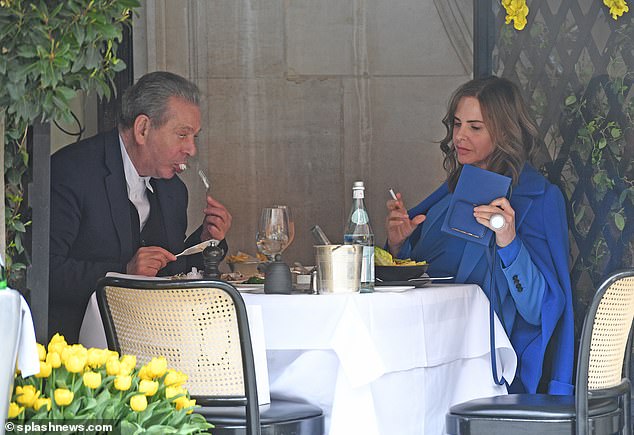 On the menu: The couple, who are regulars at the swanky seafood restaurant, were seen enjoying their meal at an outdoor table 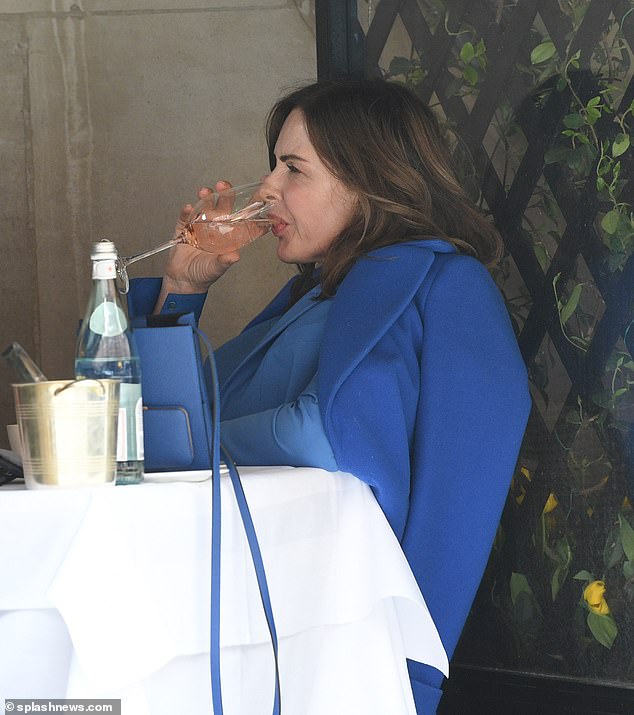 Laid back: Trinny looked the definition of effortless chic as she was spotted wearing a blue suit adorned with black buttons

The beauty entrepreneur finished off her ensemble with a pair of simple white trainers, to contrast with her all-blue outfit.

Meanwhile, the founder of M&C Saatchi had colour co-ordinated his outfit with Trinny, as he also wore a blue suit – though his was a darker shade.

His tailored outfit was paired with a crisp white shirt underneath as well as a navy jumper.

The couple, who are regulars at the swanky seafood restaurant, were seen enjoying their meal at an outdoor table. 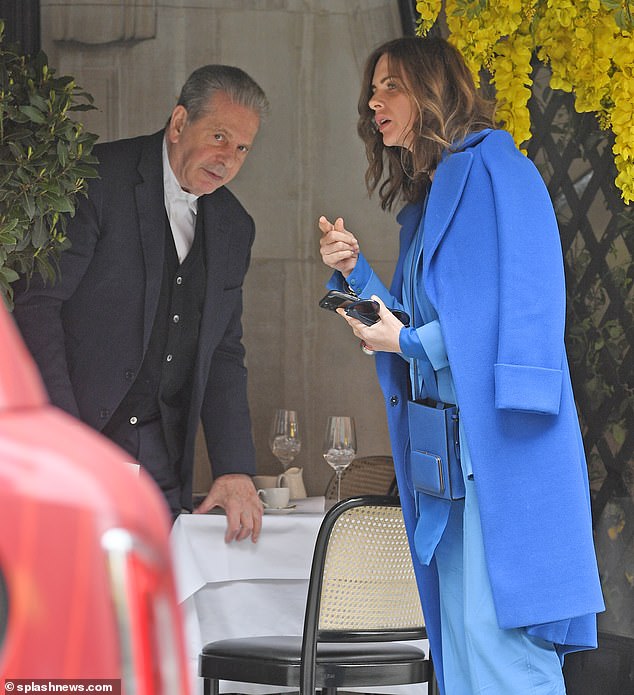 All done: Trinny had a blue purse slung over one shoulder and a blue jacket draped over her back 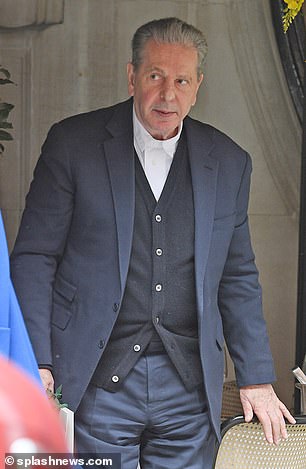 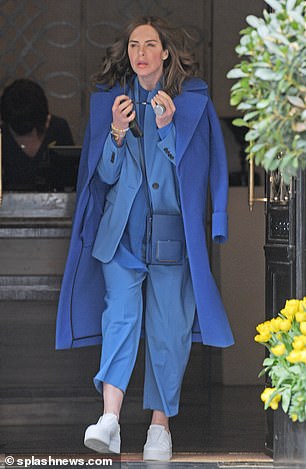 The beauty entrepreneur finished off her ensemble with a pair of simple white trainers, to contrast with her all-blue outfit, while Charles wore a tailored navy suit

Trinny and Saatchi have been dating since 2013, following the businessman’s divorce from celebrity chef Nigella Lawson.

The couple were twice spotted enjoying meals at Scott’s last month following the return of outdoor eating in England.

On April 13, the couple arrived at the eatery to enjoy al fresco dining with friends, before meeting one another again for lunch on April 24.

Last month, Trinny shared her worries after losing a clump of hair in the shower but didn’t give a specific reason why.

Yet only recently, the star discussed her recent hair loss, admitting it was caused by an unfortunate combination of COVID-19 and stress. 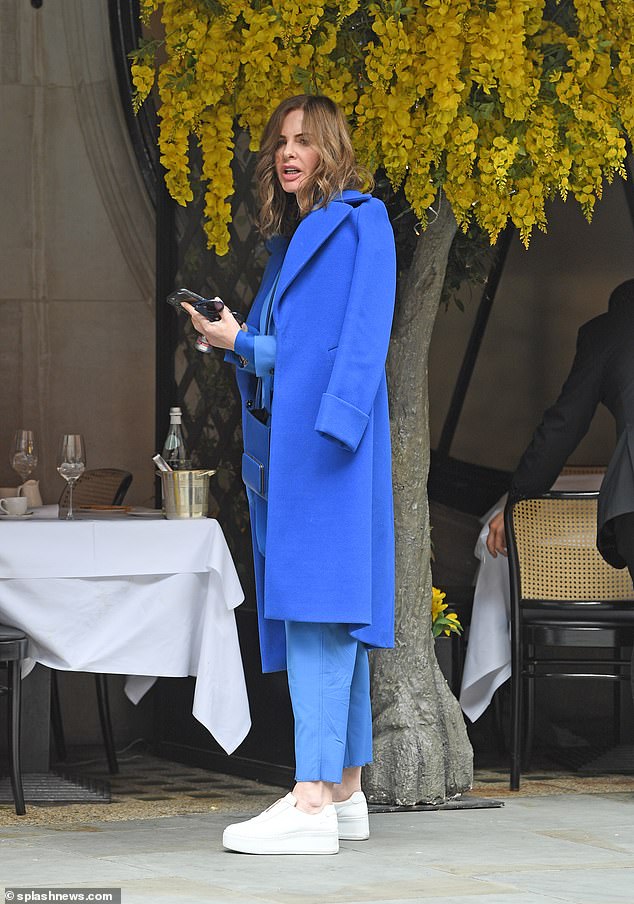 Ready to go: Trinny appeared in good spirits after her lunch date with Charles as she prepared to leave the restaurant 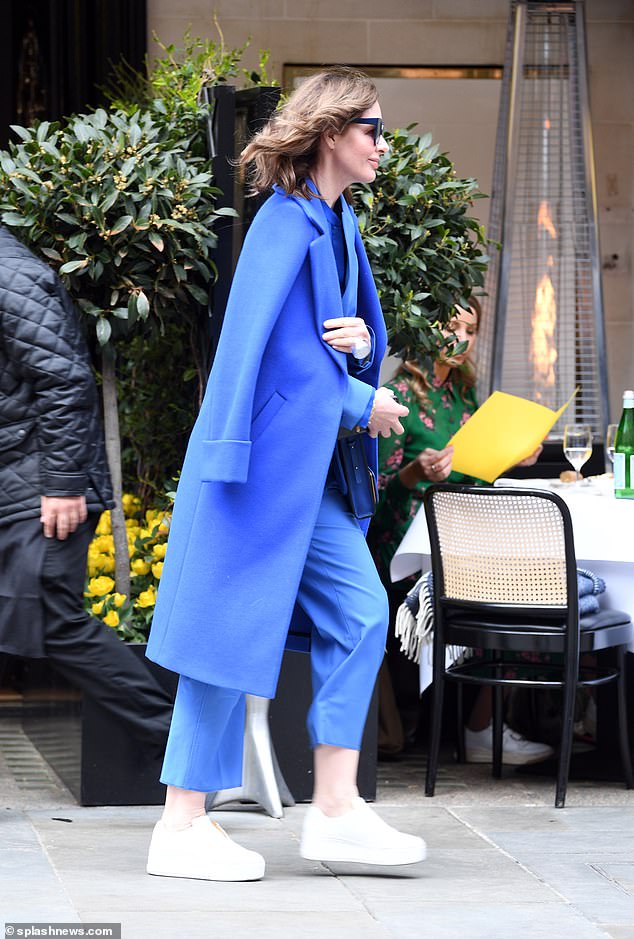 On the move:  Trinny and Charles parted ways after their lunch at Scott’s, where the pair are regulars

The stylist contracted the potentially deadly virus three-months-ago and revealed she is now taking supplements and seeking the advice of a trichologist to understand the link between hair loss and COVID.

Trichology is the study of diseases or problems related to the hair and scalp and was founded in 1902.

According to Sky News, nearly a quarter of Covid sufferers will experience hair loss within six months of contracting the illness, with women at a higher risk.

Research into long-term symptoms in Wuhan, China, discovered that 359 out of 1,655 hospital patients who had the virus suffered from hair loss. 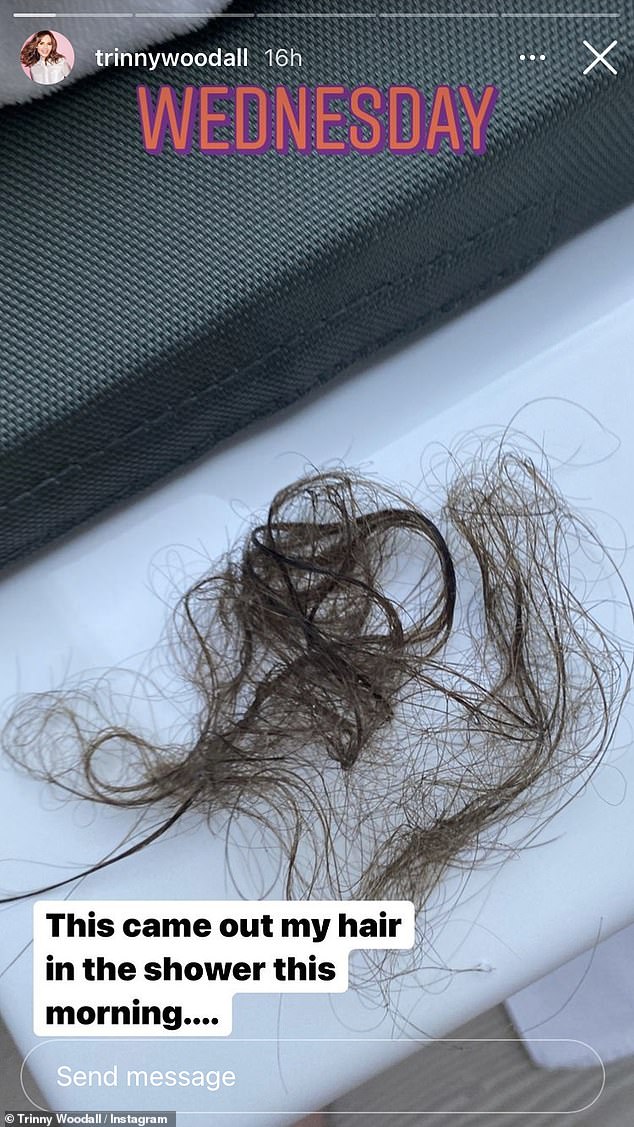 Worries: Last month, Trinny shared her worries after losing a clump of hair in the shower and recently said it has been caused by an unfortunate combination of COVID-19 and stress