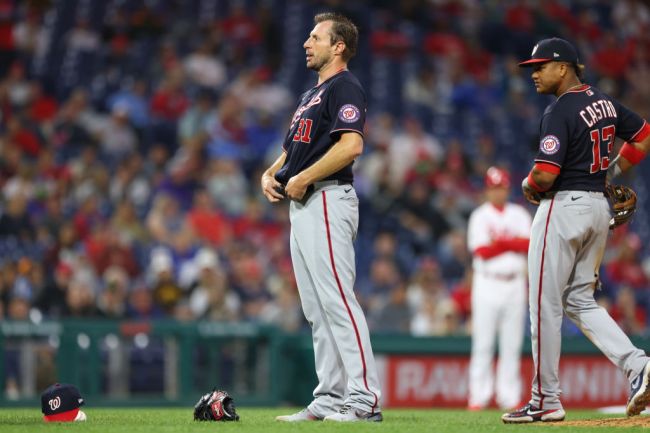 Max Scherzer got checked for sticky substances multiple times on Tuesday. The Nationals were playing the Phillies and made his first start since the crackdown. As a result, Joe Girardi got ejected.

He was asked to show his hands very early on in the game and was notably pissed off with the first check.

And then it happened again in the third.

The third time was the charm. Mad Max exploded.

Girardi threw his hands up and angrily stormed out of the dugout. That made Scherzer even more upset.

He got out of the inning and stared down Girardi in the dugout.

Max Scherzer looking into the Phillies dugout after the inning ends. pic.twitter.com/52d2taSqp2

That prompted Girardi to come out of the dugout and challenge him to a fight. He got tossed.

The reality of the situation.

The MLB is cracking down on sticky substances in a big way and out of nowhere. A lot of big-name players are PISSED about the mid-season change and have come out against the league.

Tyler Glasnow even attributed a season-ending injury to the cold-turkey approach to ridding the game of gunk. Whether you agree or disagree, most big league pitchers use a little something something to get more grip on the ball.

Spider Tack can be considered “the most illegal” of the bunch, but nearly the entire league is doing it and it’s all the same to some degree. The rosin-based chemical mixture was developed for power lifters to keep a tighter hold and has become increasingly popular recently.

Gerrit Cole, Trevor Bauer, Carlos Rodon, Tyler Glasnow, and Jack Flaherty are amongst those to speak out against the MLB. But they are more upset about how it was handled.

Baseball commissioner Rob Manfred and his team have really botched this whole thing. There was no warning and it’s completely subjective. They say the June 21 start date was because they wanted to gather data first.

Through the first portion of the season, strikeouts and ERA is up, while batting average is down. There’s no secret there.

Nevertheless, the MLB looks terrible once again. Figure it out.