Astronomers have designed and trained a computer program which can classify tens of thousands of galaxies in just a few seconds, a task that usually takes months to accomplish.

In new researchm astrophysicists from Australia have used machine learning to speed up a process that is often done manually by astronomers and citizen scientists around the world.

“Galaxies come in different shapes and sizes” said lead author Mitchell Cavanagh, a PhD candidate based at The University of Western Australia node of the International Centre for Radio Astronomy Research (ICRAR).

“Classifying the shapes of galaxies is an important step in understanding their formation and evolution, and can even shed light on the nature of the Universe itself.”

Mr Cavanagh said that with larger surveys of the sky happening all the time, astronomers are collecting too many galaxies to look at and classify on their own.

“We’re talking several million galaxies over the next few years. Sometimes citizen scientists are recruited to help classify galaxy shapes in projects like Galaxy Zoo, but this still takes time.”

This is where convolutional neural networks, or CNNs, come in. In today’s high-tech world, these kinds of computer programs are everywhere, used in everything from medical imaging, stock markets and data analytics, to how Netflix generates recommendations based on your viewing history.

In recent years, CNNs have begun to see wider adoption in astronomy. Most of the existing CNNs that astronomers use are binary – is this a spiral galaxy or not? – but this new CNN uses multiclass classification – is this an elliptical, lenticular, spiral, or irregular galaxy? – with more accuracy than the existing binary networks.

“The massive advantage of neural networks is speed. Survey images that would otherwise have taken months to be classified by humans can instead be classified in mere minutes.”

“Using a standard graphics card, we can classify 14,000 galaxies in less than 3 seconds.”

“These neural networks are not necessarily going to be better than people because they’re trained by people, but they’re getting close with more than 80% accuracy, and up to 97% when classifying between ellipticals and spirals.”

“If you place a group of astronomers into a room and ask them to classify a bunch of images, there will almost certainly be disagreements. This inherent uncertainty is the limiting factor in any AI model trained on labelled data.”

One great advantage of this new AI is that the researchers will be able to classify more than 100,000,000 galaxies at different distances (or redshifts) from Earth and in different environments (groups, clusters etc). This will help them understand how galaxies are being transformed over time, and why it might happen in particular environments.

The CNNs that Mr Cavanagh has developed aren’t just for astronomy. They can be repurposed for use in many other fields, as long as they have a large enough dataset to train with.

“CNNs will play an increasingly important role in the future of data processing, especially as fields like astronomy grapple with the challenges of big data,” he said

Stellar Chemistry, The Universe And All Within It 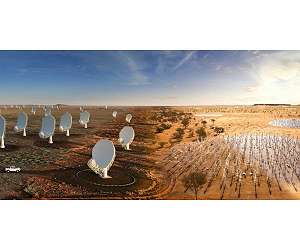 SKA Observatory Global Headquarters, UK, Tuesday 29 June 2021 – At a historic meeting of its Council last week, the recently formed SKA Observatory (SKAO) saw its Member States approve the start of construction of the SKA telescopes in Australia and South Africa.

The two telescopes, currently designated SKA-Low and SKA-Mid, names which describe the radio frequency range they each cover, will be the two largest and most complex networks of radio telescopes ever built.

The decision to approve … read more

Yup, those sure are Lily James and Sebastian Stan as Pam & Tommy