Haitian immigrants deported back to the Caribbean nation have bit Immigration and Customs Enforcement officers and assaulted pilots on deportation flights back to Port-au-Prince, according to new reports.

In one incident on Monday at Laughlin Air Force Base in Texas, two Haitian migrants left their seats as the plane taxied to the runway and attacked ICE agents by biting them, forcing takeoff to be delayed, according to the Washington Examiner.

Meanwhile in a another incident, three ICE officers also suffered non-life-threatening injuries during an assault on Tuesday at the Port-au-Prince airport, when a group from a plan carrying single adult men stormed another recently arrived flight carrying deported families, according to NBC News.

The Haitian men also assaulted the pilots of that plane, who work for a government contractor licensed to fly deportation flights, a source familiar with internal reports told the outlet. 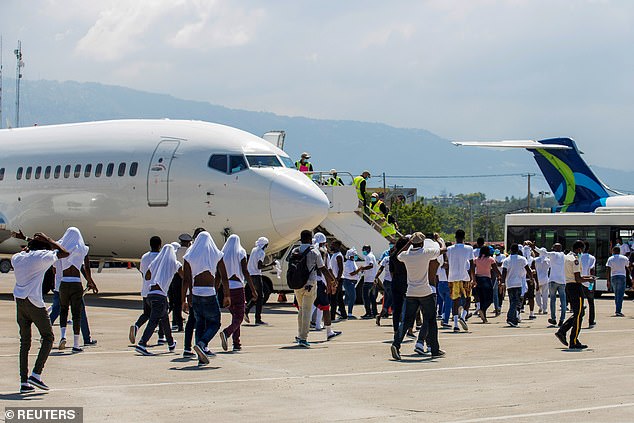 Haitian migrants board an airport bus in Port-au-Prince after U.S. authorities deported them on Tuesday. The airport saw scenes of chaos as some migrants tried to storm a plane 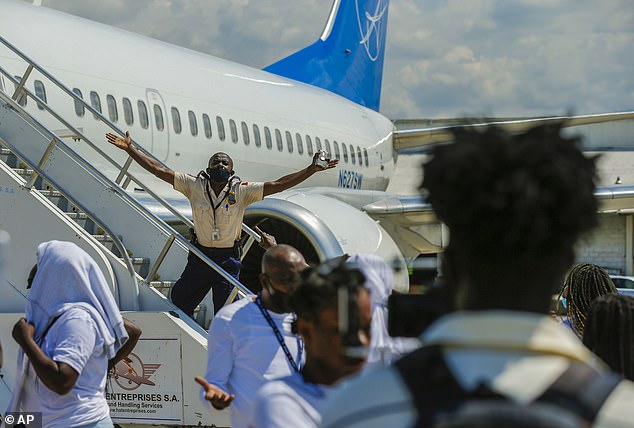 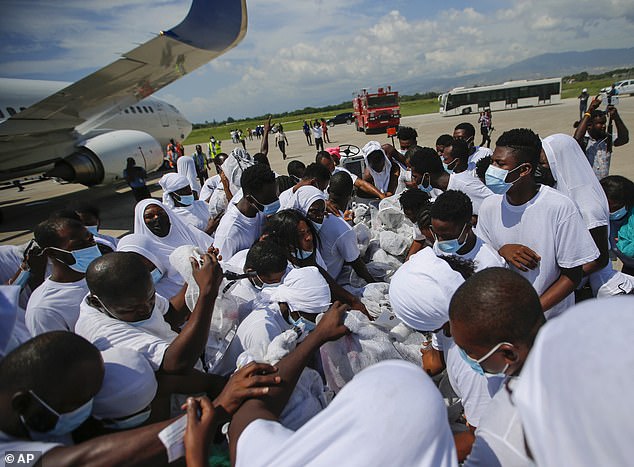 Haitians deported from the United States recover their belongings on the tarmac of the Toussaint Louverture airport in Port-au-Prince, Haiti on Tuesday

Number of migrants as of Tuesday evening: 8,600

‘On Tuesday, Sept. 21, some adult migrants caused two separate disruptions on the tarmac after deplaning in Port-au-Prince, Haiti,’ a Department of Homeland Security spokesperson said in a statement.

‘Haitian crowd control officers responded to both incidents and resolved the situations. ICE fully respects the rights of all people to peacefully express their opinions, while continuing to perform its immigration enforcement mission consistent with our priorities, federal law and agency policy,’ the spokesperson said.

Nearly 10,000 migrants, mainly Haitian, remain in worsening conditions in an impromptu camp that sprang up under a bridge spanning the Rio Grande from the Texas town Del Rio to Mexico’s Ciudad Acuna.

In recent days, U.S. authorities have removed at least 4,000 people from the site for processing in detention centers. Some 1,000 Haitians have been deported to their homeland on flights to Haiti, with repatriations set to continue on a regular basis, the U.S. Department of Homeland Security said.

Returnees reacted angrily as they stepped off flights at Port-au-Prince airport on Tuesday after spending thousands of dollars on arduous voyages attempting to reach the United States, after learning that the Biden administration had stopped deporting Haitians.

In one incident, a group of men in white T-shirts rushed back toward the plane after they disembarked in Port-au-Prince, with one man attempting to get back on board, witnesses told Reuters.

The migrants broke into a restricted area of the airport as they attempted to recover passports and personal belongings, and ground staff closed the door of the plane before the man could scale the steps back into the cabin. 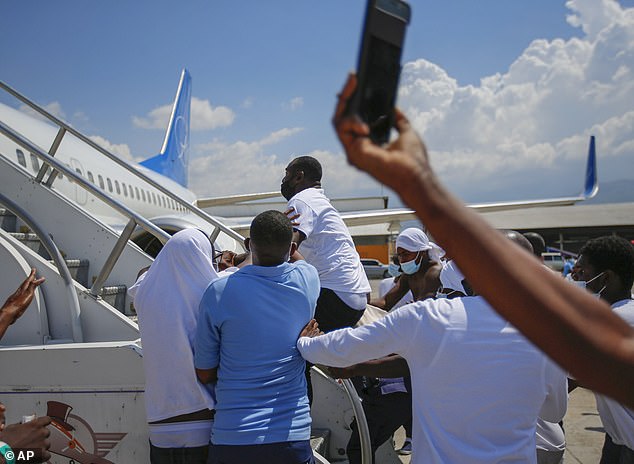 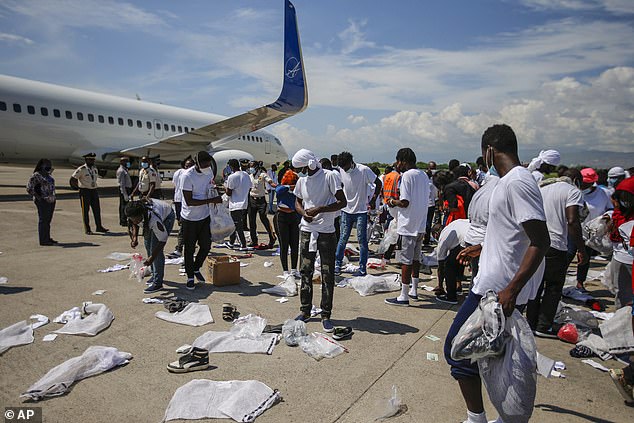 Haitians deported from the United States recover their belongings scattered on the tarmac of the Toussaint Louverture airport in Port-au-Prince, Haiti Tuesday 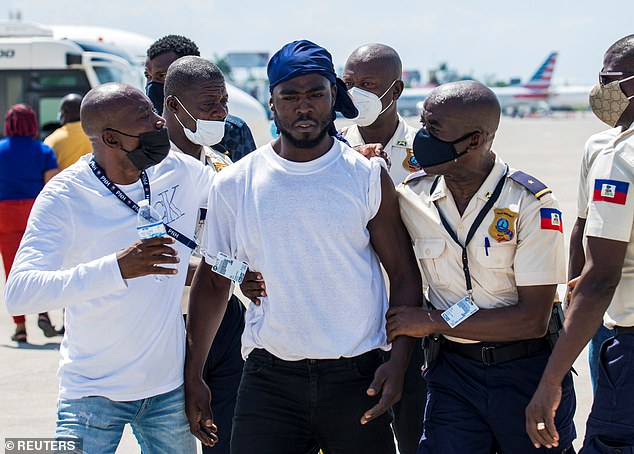 A Haitian migrant is calmed by Haitian authorities after disturbances at the Toussaint Louverture International Airport in Port-au-Prince, Haiti

Tempers ran high, exacerbated by news the Haitian government had accepted the deportations.

‘I am angry at the government. We were told in prison that the Haitian government had signed to send us back to Haiti. They are all bad people, these authorities,’ said Yranese Melidor, 45, who arrived on an earlier flight.

Meanwhile, thousands of Haitian migrants are being freed into the US on a ‘very, very large scale’ rather than being flown out on deportation flights as the Biden administration promised, according to officials.

Two US officials with knowledge of the situation in Del Rio – where a peak of around 14,600 mostly Haitian migrants were camped out under a bridge at the weekend after crossing into the US from Mexico – said thousands have been released into the US with notices to appear at an immigration court in 60 days’ time under the so-called ‘catch and release’ scheme.

Others have been sent on buses and planes to other parts of the US to be processed by Border Patrol agents there, they said.

The exact number released is unclear, with Texas Governor Greg Abbott saying that 8,600 migrants were still in Del Rio on Tuesday afternoon.

Deportation flights began on Sunday, and by Wednesday morning, over 1,000 migrants had been flown back to Haiti, a source with knowledge of the matter told DailyMail.com.

Ibiza could reopen for international tourism as early as May